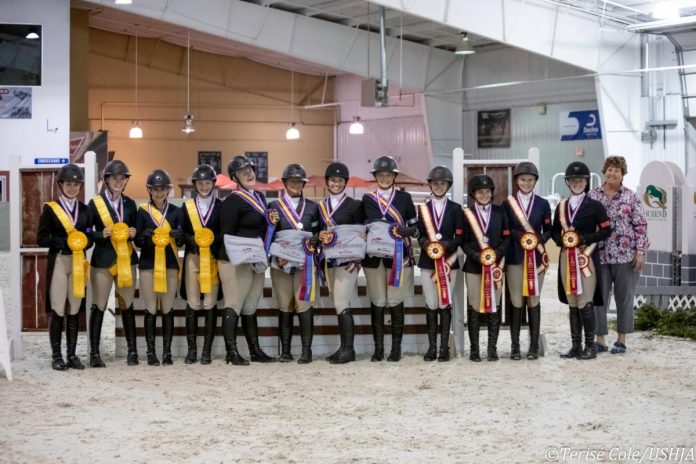 St. Louis, Mo.—September 8, 2019—The USHJA Zone 7 Children’s and Adult Amateur Hunter Championships, presented by SmartPak, kicked off on Saturday, September 7 with team competition at the Lake St. Louis Indoor Preview in St, Louis, Missouri. Three teams of four riders went head-to-head in an under saddle class and over two Skip Bailey-designed classic hunter courses. In the end, the White Team made up of Adult Amateurs Rebecca Bynum-Avery, Kristen Davison, Connie Fry and Mia Holstead topped the podium, claiming the gold medal with a final score of 1120.5. Silver went to the Red Team with a 989 and the Purple Team finished with a 952 for bronze.

Fry on being a member of a team: This is my first time riding on a team and it was so awesome. I loved meeting everybody we rode with. We really pulled together in the very beginning, stayed a tight knit team all the time and cheered each other on.

Davison on the championship experience and her rounds: Riding on a team and getting to meet these lovely, supportive ladies was such a great experience. My mare is very green, but she came out and gave me her best tonight. I’m super proud of her.

All riders received polo shirts and tote bags from the Championships’ presenting sponsor, SmartPak. Medals and ribbons were awarded to the top three teams with the gold medal team receiving embroidered coolers.

The horse-and-rider combinations went go on to compete in the Individual Championship on Sunday, which also consisted of three phases: an under saddle, a classic hunter derby-style course and a handy hunter course. Each phase was placed and awarded individually, and the horse-and-rider combination with the highest overall score from all three phases was crowned Individual Champion.

The USHJA extends special thanks to John McQueen and the entire Queenie Productions team for hosting the Championships, Chef d’Equipe Patricia Jellerson for leading the teams, and presenting sponsor SmartPak for their generosity and support of the sport.