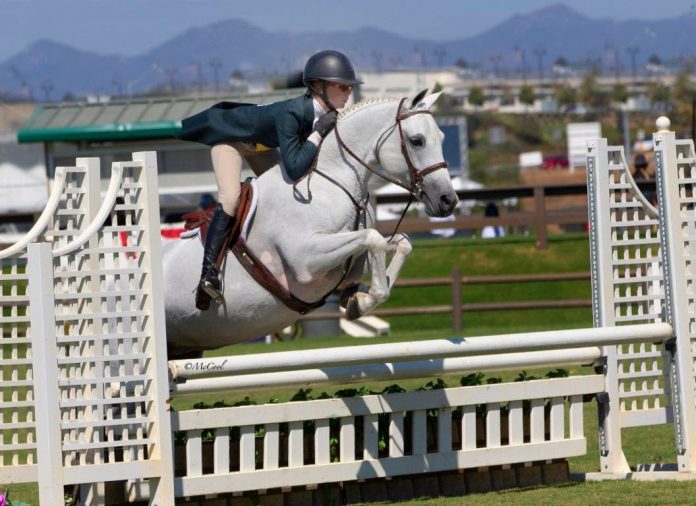 San Juan Capistrano, Calif.—Sept. 14, 2019—Hosted on the grass at the Blenheim EquiSport Fall Tournament, on Friday, Sept. 13, the inaugural USHJA Pony Hunter Derby Championship–West went to the Large ponies. Skylar Wireman and Having Fun Already, LLC’s Large pony, Secret Crush, earned consistent top scores of 80 in the Classic Hunter Round and 83 in the Handy Hunter Round to lead the victory gallop. Wireman also rode Heather Hornor’s Large pony, Half Moon Bay, to the Reserve Championship spot. Rounding out the top three was Grace Miller and Chiccobello, also a Large, owned by Alexa Leong.

The beautiful derby courses, designed by Jasen Shelley, consisted of bending lines, single fences and an in-and-out by the in-gate. In the Handy Round, the pony riders were given opportunities for inside turns as well as a trot jump. The Championship was judged by Scott Hofstetter and Tony Sgarlata on Panel One and Chance Arakelian with Bob Crandall on Panel Two.

When asked about the courses for the inaugural Pony Hunter Derby Championship, 14-year-old Wireman was very complimentary, “I really enjoyed the handy course; it gave opportunities for inside turns and I knew that since Secret Crush is experienced, she would be able to do them easily.”

Secret Crush, a 14-year-old gray Welsh Pony Cross mare, is a new catch ride for Wireman, as Having Fun Already, LLC took ownership while in Lexington, Kentucky, in August. Traci Brooks of Balmoral Farm trains Secret Crush and noted, “She is a very good and sweet pony who knows her job well. We purchased her for one of our clients, Evie Becky, at [USEF] Pony Finals and Evie was able to compete with her in the model that week.”

“I’ll be ready to do her in the whole division at pony finals next year, hopefully!” Becky said.

Rider, trainer and new young owner all agreed that they each have a secret crush on the wonderful white pony. It’s only been a bit over a month, but they are certainly having fun already!

As the overall Champion, Secret Crush and Wireman won a tack trunk from Sea Horse Tack Trunks, a belt from Boy O Boy Bridleworks, a show shirt from Essex Classics, and a gorgeous custom floral blanket from Champion Floral Blankets by Susan Garrett. The pair also earned the High Score Award for the Large Section.

Wireman’s consistent rides on Half Moon Bay, a Large 9-year-old Welsh Pony Cross gelding, earned her the Reserve Champion title, which came along with a tack trunk from Sea Horse Tack Trunks and a belt from Boy O Boy Bridleworks.

Coming into the Handy Round in fourth place, Grace Miller laid down a winning Handy trip with an 82.25 score, moving her into third place overall aboard Alexa Leong’s 12-year-old large German Riding Pony gelding, Chiccobello. As the third-place finisher, Miller received prizes from sponsors including a grooming tote from Sea Horse Tack Trunks and a belt from Boy O Boy Bridleworks.

Release by EqSol for USHJA

About the U.S. Hunter Jumper Association

The United States Hunter Jumper Association, as the official hunter/jumper affiliate of the United States Equestrian Federation, is a competition-based sport organization that serves our members through educational programs, awards and recognition, communication and rules. We provide a wide array of programs for all hunter/jumper levels, and we are mindful of the well-being of our equine partners. Additionally, we are committed to preserving the history of our sport and through our Foundation we support charitable and benevolent services. Learn more at ushja.org.

John Pearce and Chantico are Invincible in $25,000 Markel Insurance Grand...