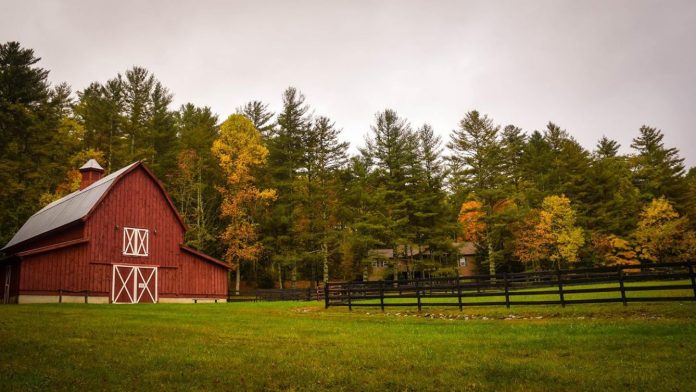 A Fresh Start with Wild Horses, Three Daughters and Gumption

It was a boy, of course. A girl leaving her home and horse has boy written all over it.

I left my home and dream horse, Apache, and my gas station home when I was 17.  I went to college, got married, moved to upstate New York, and then to Vermont.  Even had a baby—all without my horse.

If I were to draw a picture to illustrate the twenty years of my marriage, the first person I’d draw would be me, in profile, riding a second hand bike around and around in a cyclone like Miss Almira Gulch, AKA the Wicked Witch of the West.  I’d have to draw a lot of lines to indicate speed and to show life’s stormy gales as they broke over my pinched, determined face during those twenty years.

I’d draw my three daughters getting pulled along behind me, one at a time, in a covered bicycle child trailer, where they’d be protected from bugs flying up their noses by the trailer’s two-in-one bug screen and plastic weather shield canopy. Inside the trailer, I’d draw snack-sized bags of Doritos and Sippy cups of Welch’s grape pop piled next to my daughters.  My idea of sustenance.  Also, Scholastic books and a Sesame Street tape recorder. My idea of entertainment. It’d all have to be a little blurry, appear in a bit of a haze as we all rushed along the roadmap of my life.

The roadmap would look like a confusion of roads going in all directions.  Minnesota to New York to Vermont. Vermont to Germany and back to Vermont. Vermont to Illinois and back to Vermont. My husband was a man with a temper that made dynamite look like a birthday candle. He had , and with an arsenal of opinions and rules that made The Godfather look like Papa Smurf. , whichAll of this contributed to the confusion. Finally, after twenty years, the road would go straight down from Vermont to North Carolina, where my marriage and our life as a family ended.

“Do you think I’m doing the right thing getting a divorce?” I asked Megan, my twelve-year-old daughter as I tucked her in.  I always asked Megan inappropriate questions like that. Three-year-old Celina sat on the floor at my feet softly singing “I-love-my-sister,” on endless repeat as she played with her Beanie Babies.

“You are Mom,” Megan replied. Her hazel eyes and even her freckles looked serious and more grown-up than I’d ever seen.  “You know you and Dad never really got along.”

“It wasn’t just the cooking Mom,” said Megan, touching my arm, gentle as a whisper.

I am a wishy-washy, people pleasing person. I thought about the day before my wedding to Mike, how I’d driven to a hidden pasture way out in the country, shimmied through a barbwire fence and sat on a big rock, crying and yelling to the sky, I won’t marry him! I won’t! But of course, I did.

“I think you’re right honey,” I said as I sighed, hugging her close. “You sleep really good in your big, beautiful room.” I rolled off the bed, smoothed her blanket around her and said, “Pretty soon we’ll start looking for horses. Won’t that be great?”

“I can’t wait,” said Megan and a smile lit her face.

Gathering up Celina and her Beanie Babies, I carried her downstairs to the master bedroom and tucked her into the foldout couch I’d set up next to my bed.

I flicked off the light, and started thinking. I always told the girls that nighttime was never a good time for thinking. It may have been the only sensible motherly advice I’d ever given. But per usual, I didn’t follow my own scrap of wisdom.

I thought about finding a home for us. A capital-H Home. A peaceful place.  Somewhere quiet where a single mom and her daughters could live safely in the country and keep the horses, dogs, cats, and whatever other animals we needed and wanted all around us.  I thought we needed a farm. But the question was…where? We’d lived so many places in the last twenty years. Where was “home?”

And I thought about horses. Every winter when I was a kid, I rode the wild, pampas mare La Bruja from The Wild Heart in the form of my orange plastic, fast-as-greased-lightening roll-up sled. Every spring, summer, and fall I rode her in the form of my bike. And while my imagination ran with the mare, I saved up for a horse of my own. I salvaged old, valuable coins by poking through the office cash register everyday, coin by coin, plucking out and saving the older ones in a beat up jewelry box.  I swept the driveway of the station, polished the linoleum floors in the kitchen, and painted the railings on the deck overlooking the junkyard for a dollar a job.  I babysat for two little freckle-faced boys in the trailer court next door. The horses that came from that haggling and saving my determination were the reason I promised my daughters we’d get a horse when we moved from Vermont to North Carolina.  I remembered the sense of freedom and strength I always got when riding my horse.  And the power—the power that let me go where I wanted—to explore the world without fear.  Power that I controlled with a sure but gentle, loving touch.

I took care of my horse. Fed, watered, groomed, and sheltered him. And in return, he gave me power and strength and freedom.  It was a steady and true and deeply symbiotic relationship. A relationship I could count on. Better than any boy for sure, I’d thought in my youth.  And better than any man on earth, I thought as I watched Celina sleep with her beanie babies.

A horse would let my daughters run, really run, headlong into this life with joy and with all their hearts.  I hoped that having horses would entice them to spend more time galloping across open fields, and less time looking in the mirror.  And I hoped that having horses would give them such confidence that when they did look in the mirror, they’d see what I saw—beautiful, kind, strong young women with the willpower, intelligence, and just plain grit to do whatever in this world they wanted.

The first thing I’ll do is get us a horse, I thought.

I sat on my bed, took a pen and pad of sticky notes from my bedside table and started making a list.

Find a good horse, I wrote and stuck the note to the table.

Kim Hinson is an outside-loving, forever optimistic, yet chronically worried writer, professor, and mother of three daughters. She believes that finding a home—a capital H Home—and having a good horse are what life’s all about.  Add a lot of great books to that mix and Poof! It’s Heaven on Earth. Find out more about Kim and see lots of pictures at http://kimhinson.com/

The Plight of the Amateur