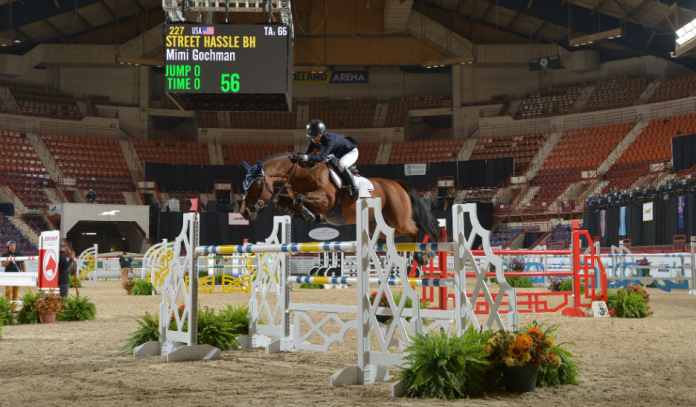 “I’ve had Stevie (Street Hassle BH) about three years now,” said Gochman. “He is super reliable and has consistently done the high Junior jumpers and Prix des States twice now with me. He’s got a great personality and tries his best every single time.”

Regarding the success of the team, only incurring 4 faults after two rounds, Gochman noted a sense of security going into the second round. “It feels very secure. I did my best, as a team we did our best, and it’s nice to have it assured that we (as a team) were going to do well. It was nice to go in and just focus on our rounds. I went in just trying to go clear. It was fun!”

In round one, the first three riders in Zone 2 produced fault-free rounds. With a drop score in hand, anchor rider Sophie Gochman elected to sit the round out as the official drop score for the team. In round two, Steckbeck incurred four faults but maintained Zone 2’s team lead.

Riding for the podium, one rider from Zone 7 and one from Zone 5 were chosen for the jump-off after tying for second place with 12 faults. In the end, Zone 7 won the silver medal with a clear jump-off round ending on a team score of 12 faults. Zone 5 took home the bronze after pulling a rail in the jump-off.

This year’s PNHS will host two internationally sanctioned FEI CSI3* jumper classes, designed by FEI 4* Course Designer and Olympic Silver medalist, Michel Vaillancourt. The nation’s top jumping riders and horses will go head-to-head in the $60,000 Pennsylvania Big Jump, with an increase of $10,000 in prize money over last year, and the $134,000 Grand Prix de Penn National which is held on the show’s final day, Saturday, October 19.