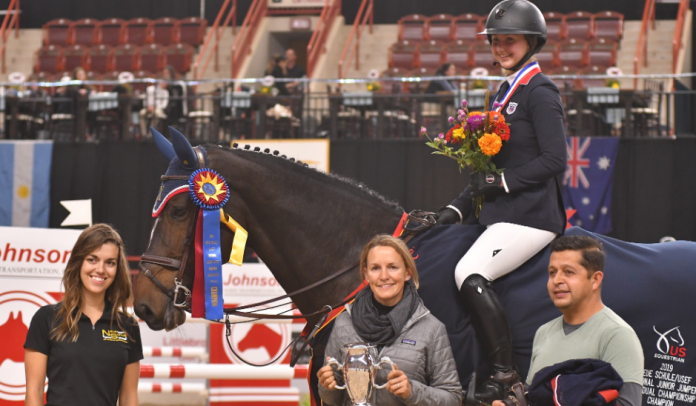 “I’m very thankful to have such an amazing horse. It’s been an incredible year,” said Reichow, noting this was her last year in the Juniors. “It definitely has been the best year of my life; I’ll never forget it. With Talent Search and now this (Neue Schule/USEF National Junior Jumper Individual Championships) I didn’t expect this to happen, I’m over the moon.”

The final course, designed by Ken Krome of Westminster, MD, featured eleven jumps with fourteen jumping efforts at 1.35m with a time allowed of 69 seconds. Reichow and Forever Alve represented Zone 10 and produced three brilliant rounds in the 2019 Neue Schule/USEF National Junior Jumper Championships. The duo only incurred one rail in Phase II to remain in the top three heading into the final phase, where they produced a double clear round and ended the weekend on a final score of four penalty points.

“It’s such an honor and such a prestigious class and I don’t think someone from Zone 10 has won it in a couple years, and I’m truly honored I was able to do that this year,” said Reichow. “It has always been a goal of mine to come here (PNHS) and do well.”

This year’s PNHS will host five internationally sanctioned FEI CSI3* jumper classes, designed by FEI 4* Course Designer and Olympic Silver medalist, Michel Vaillancourt. The nation’s top jumping riders and horses will go head-to-head in the $60,000 Pennsylvania Big Jump, with an increase of $10,000 in prize money over last year, and the $134,000 Grand Prix de Penn National which is held on the show’s final day, Saturday, October 19.