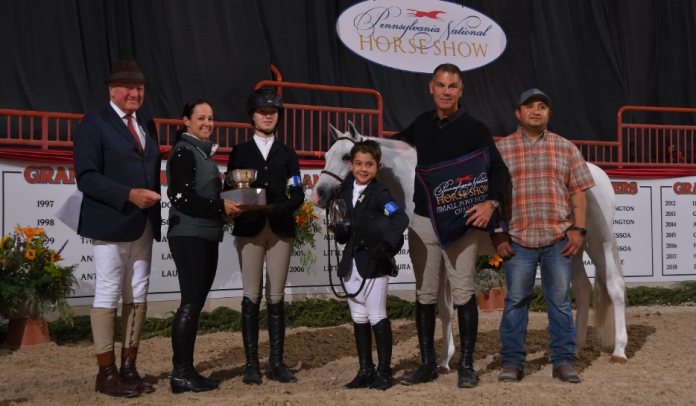 Harrisburg, PA – October 12, 2019 – With his family next to the ring and a good luck charm in his pocket, nine-year-old JJ Torano piloted H.G. Mud Puddles through a successful final round in the Small Pony Hunter division Saturday at the 2019 Pennsylvania National Horse Show (PNHS). The duo earned a score of 87.00 to secure the Small Pony Hunter Championship and the Knick Knack Challenge Trophy at the Pennsylvania Farm Show Complex in Harrisburg, PA.

For his first year at the PNHS, Torano was joined by his parents and, in a way, his grandfather. Torano kept a photo of him and a blue ribbon, along with a good-luck letter from John Roper, in his pocket during his rides as a connection to his late grandfather. His father, Jimmy Torano, added that the good luck charm would stay with them for other horse shows.

“I wasn’t nervous,” said Torano, who has had H.G. Mud Puddles for a year and a half. “I’m not usually nervous. She always jumps the jumps, and I like that I can really trust her. The first day we tried her, there was something that flew in the ring, and she just trotted right over it.”

While hunters of all sizes competed for Championships and High Point Awards, Family Fun Day was in full swing at the PNHS as children and their parents enjoyed story hour, carriage rides, craft activities and the show itself. Starting the day’s opening ceremonies, the William C. Steinkraus Style Award was given to Madison Goetzmann for best exemplifying the American style of equitation and sportsmanship in the 2019 Neue Schule/USEF Prix des States.

Stella Wasserman accepted the High Point Small 3’6” Junior Hunter award for her performances in the 15 & Under division with Boss, which earned them the Huntland Derby Perpetual Cup with a total of 27 points.

Riding the green Baroness of Locheil, Maddie Tosh earned the Swamp Girl Challenge Trophy and her second Championship at the PNHS this year in the Medium Pony Hunter division with a total of 20 points.

“This was her (Baroness of Locheil) first time here, and she was super nervous yesterday and today in the Handy,” said Tosh. “She was definitely way more relaxed going into the Stake, and then she was amazing. I knew we were going to get a high score, because when she goes well, she’s so pretty.” The pair earned a score of 90.00 in their final round.

Closing out Saturday’s events, Caroline Passarelli and So Dapper were awarded the Large Pony Hunter Championship and the For the Laughter Perpetual Cup with a total of 24 points.

The EMO Agency Pony Hunter High Five Award, sponsored by EMO Agency, is awarded to the pony and rider who have the highest score in their division. Both with scores of 90.00 in their divisions, Caroline Passarelli and Maddie Tosh rode away with this award.

This year’s PNHS will host five internationally sanctioned FEI CSI3* jumper classes, designed by FEI 4* Course Designer and Olympic Silver medalist, Michel Vaillancourt. The nation’s top jumping riders and horses will go head-to-head in the $60,000 Pennsylvania Big Jump, with an increase of $10,000 in prize money over last year, and the $134,000 Grand Prix de Penn National which is held on the show’s final day, Saturday, October 19.