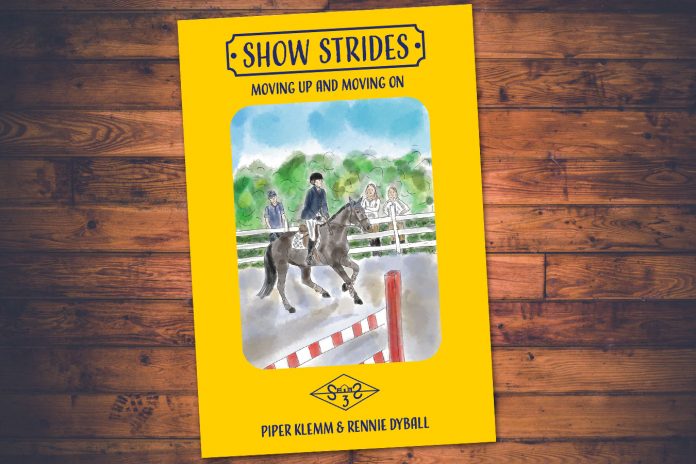 We hope you are enjoying books 1 and 2 of  The Plaid Horse’s new novel series, Show Strides. To celebrate the release of book 3, Moving Up and Moving On, we are excited to share this sneak peek below. Show Strides books 1, 2 and 3 are available on Amazon (paperback, Kindle and Audible), and at select tack stores.

Jacob was already in the ring by the time Tally arrived. Ryan was watching him at the in-gate. Both of

“In for their power and speed class, this is number 520, Jacob Viston, riding Carlo.”

Tally thought it would be obvious to just about anyone how great Jacob looked on a horse. Jacob’s position was so solid, with a tight lower leg and deep heels, that
Tally almost didn’t notice
the bit of awkwardness Carlo had to his jumping style.

As they rounded a corner to the in-and-out, Carlo held his head high and Jacob sat deeply in the saddle, turning his toes out slightly to use his spurs on the little bay.

Carlo rubbed the vertical jumping in and took an abbreviated stride in the middle. There was a moment of hesitation – Tally wasn’t sure if he’d take off long after one stride or try to squeeze in a second –
and Jacob clucked at his horse.

The gelding took off after one stride, but he didn’t have the step or the scope to clear the oxer. He punched out the top rail hard, and when he put his front legs down to land the jump, one hoof came down squarely on top of the fallen rail. Carlo stumbled, and Jacob came down on his neck in a heap. The pair scrambled away, and Jacob pulled the horse up swiftly. Carlo was limping.

“The rider is excused, thank you,” said the announcer.

Was that really necessary? Tally thought, her face burning for her
new barn friend and her heart
breaking for his horse.

Ryan jogged into the ring and ran up Carlo’s stirrups, his eyes carefully trained on the horse’s front legs as they walked out of the ring.

Tally kept her distance as Ryan checked out Carlo’s right front leg, calling a vet to come look as well. Jacob’s mom joined them, and the group talked among themselves until Jacob walked toward Tally, his head down.

“Hey,” Tally said, and Jacob looked up
at her. He was trying not to cry.

“What did the vet say?” Tally asked.

“She doesn’t think it’s serious, but there’s no way to know for sure yet. We just have to let him rest.”

Jacob’s mom motioned for
him to come over to the
group. Jacob gave Tally a little wave before heading back to his horse.

A couple days after returning home from the Pinnacle Summer Classic, Tally was moving flower boxes into the show office when she saw Jacob walking toward the ring with Sweetie.

He smiled upon seeing a familiar face.

“He’s on stall rest for a while. But it could have been a lot worse, so I’m relieved,” Jacob said, petting Sweetie’s shoulder.

“So glad to hear that,” Tally said, setting a flower box down and brushing the dirt off her hands. “You’re going to lesson on Sweetie? She’s the best.”

“Yeah, I’ve heard she’s a lot of fun. I’m glad I can keep riding with Ryan while Carlo gets better. Hey, how did you and Mac end up doing at the show?”

“Really well, actually,” Tally said. “Goose was champion in the children’s ponies, and Joey was reserve in the mediums.”

“Thanks,” Tally said. “I’m proud of that little guy. Have a great lesson.”

As she continued working in the indoor, Tally overheard a conversation between Ryan and Jacob about what happened with Carlo.

“I’m sorry to tell you this, but I think the one-meter classes are outside of Carlo’s scope,” said Ryan. “You’d serve him better to be really successful at a lower height.” Tally felt a bit awkward overhearing their talk, but made a mental note to look up how big one-meter fences were.

“I agree. I think my old trainer was so focused on us moving up that… I don’t know. I wish I’d realized sooner that Carlo was overmatched.”

“Don’t worry about that,” Ryan said. “We’re going to do right by Carlo now. Let’s keep you in the saddle, and when Carlo recovers, you guys can go kill it together in the point-eight meter. How’s that sound?”

Tally watched the rest of his lesson while she worked, noting how happy Sweetie looked with Jacob. She couldn’t ignore the pang of jealousy over someone new riding her favorite school horse – and riding the mare so well – but, as Ryan pointed out, doing right by the horses was the important part of their sport. She was happy that Sweetie was happy.

We want to hear from you: Share your thoughts on Show Strides by writing to showstrides@theplaidhorse.comand leave us a review on Amazon!

About the Author: Rennie Dyball is the author of several books, including The Plaid Horse’s middle grade novel series, Show Strides. She’s also a contributing writer for TPH and a ghostwriter for celebrity books. Rennie lives in Maryland and competes in hunters and equitation.

“March to Your Own Drum.” How Gabrielle Strigel Has Paved Her Own Way to the Top