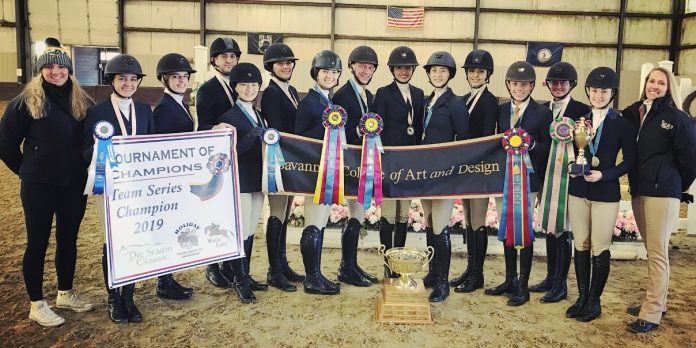 Lots of teams have gone on a roll.  You get a couple good freshmen, add some upper classmen and ride that wave for three or four years of wins.  Then there’s the Savannah College of Art & Design, who just won their SIXTH STRAIGHT Tournament of Champions, September 21 at University of Connecticut, propelling themselves into the sixth year of their current roll.

After winning the IHSA National Championship in 2015, 2016, 2017, then finishing second by a single point in 2018, then AGAIN in 2019, people kept saying, “Wait till Ryan Genn graduates,” then “Tatum Tatreau will be gone next year,” but then came Adam Edgar and Maddy Keck and Brady Martino and Cady Dickensheets and all the rest,.  Adam was National Champion in Open Flat in 2018, and Reserve Champion in Open Fences. He topped that in 2019 by winning Cacchione Cup, as the top overall open rider in the country. Guess what guys… he’s only a junior and he’s still going, and now they have a new kid named Rose Skloff from California.

Maddy Keck started the SCAD show, winning the A Section of Intermediate Flat, before Adam Edgar won the B Section of Open Fences.   Boom! – 14 points to start the show. But in the two classes between Keck and Edgar, Bridgewater College’s Georgia Osborne won the Section B Intermediate and Michael Golinowski won the Open Fences Section B for Bridgewater, putting Bridgewater back in a tie with SCAD.  Mount Holyoke took two seconds in those classes and those three teams rode the big start to the winners circle, as SCAD won Champion, Mount Holyoke in Reserve, and Bridgewater in 3rd place.

One of the big surprises was Sacred Heart, who overcame a slow start to score 29 points and tie with Bridgewater, before losing the tie-breaker and finishing in 4th place.  Goucher and Miami predictably placed in the team ribbons, in 5th and 7th respectively.  The unexpectedly impressive performances came from Roger Williams University – 2019 Zone 1 Champs who finished 6th place, and the host, UCONN, who finished in 8th Place team.

SCAD’s Rose Skloff, a junior from Los Angeles, got her first chance to perform in the High Tournament Medal and won the Championship, something teammates Adam Edgar and Maddy Keck had previously accomplished.  Rose was the high score on the flat and a close second-high score over fences to narrowly beat out Bridgewater’s Michael Golinowski, a sophomore from Burke, Virginia. The UCONN entry, Clara Bechtold came in 3rd, and the rest of placings follow.

Another Tournament newcomer, Mount Holyoke’s Marina McDonald, a freshman from Northampton won the Low Medal.  SCAD’s Brady Martino was beaten by a point over fences, narrowly missing winning his fourth Tournament Low Medal.  Brady is a junior from Easton, Pennsylvania. Noelle Gulley of Goucher came in 3rd and the rest can be found below.

The UCONN team and staff did a remarkable job of running the show under extreme duress, after their Team Captain of the past two years, Samantha Calzone passed away from injuries sustained in a riding accident the week prior.  UCONN riders were literally going directly from the Tournament horse show to the funeral that afternoon. We wish Sam’s family and her UCONN family our deepest condolences and support for the difficult future.

The Tournament season will continue December 7 at the Grier School in Pennsylvania, hosted by the Penn State team.  Winter Classic will be at SCAD in January, and the Spring Classic is scheduled for University of Findlay (Ohio) in March.

Questions about Tournament or requests for additional information or pictures should be addressed to Tournament Director Jim Arrigon at jimarrigon@hotmail.com.  More info and history of the Tournament can be found at RideInCollege.com .

Thanks to Steve Maxwell of CampusEquestrian.com for pictures of the event.