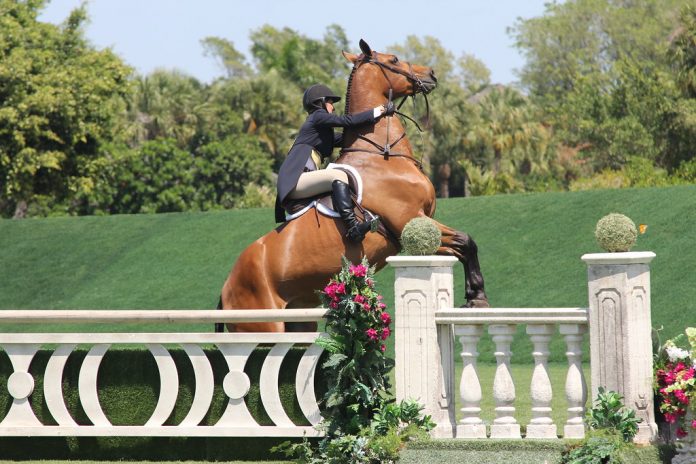 If you ride horses for long enough, you will fall off at some point. It’s inevitable. Horses and ponies will give you an ego check when you are least expecting it. I’ve had several moms (some new to the pony mom scene, and some who are fellow ammy’s) ask me recently about how to handle it when your kid falls off—particularly the first time they fall off.

It can be scary for the kid, the trainer, and especially for mom and dad. I mean, you know that your kid is on this big animal that you trust to keep them safe, but you just don’t realize quite how vulnerable they are until you see them tumbling off said massive animal.

Maybe I am a bad mom, or maybe I am just used to the falling, but I rarely get nervous about my ponykid falling at this point. Probably because I spent a decent amount of time when I was growing up doing something stupid and falling off myself. I had to learn how to shake it off and get back on quickly—lest my trainer catch wind of whatever stupid thing I was doing. I’ve had a few falls I would call significant, ones that included ER trips, but most of the time I walk away with my ego bruised far more than my body. But I have always believed in “getting back on” the horse.

My experience as a rider (including all these falls) helped take some of the fear away from my ponykid. She has literally seen me take some pretty nasty tumbles, get stepped on, and cry (from both pain and humility). But, most importantly, she’s also seen me get up and get back on. She knows that falls happen, and it’s okay.

The flip side of that, is that I also know. In the moment when she flies feet over head off her pony, I know that brief flash of time is really, really scary. While I know that more often than not, she will be fine. I also know that she could be really hurt. As a mom, it can be a truly helpless feeling. I know most moms’ instinct is to pick your baby up, hold them tight, and protect them from ever doing anything dangerous ever again.

I think you just have to remind yourself that you can’t protect your children all the time. In life, they going to fall (literally and figuratively). What an amazing lesson to learn at a young age that they have the power to pick themselves up, dust themselves off, and try again! I know lots of grownups who don’t know how to do that. Of course, you take precautions. Put them on the safest mount, make sure they never get on without a helmet, and that they ride in an environment where all the “t”’s are crossed and the “i”’s are dotted. But if they haven’t fallen off yet, they just haven’t been riding long enough.

What makes riding so difficult is that the pony has opinions and reactions. A football doesn’t care where you throw it, but a pony knows if it wants to turn right or left. Even the most even-tempered lesson pony can get frightened and scoot sometimes. It’s what makes the sport challenging, but also why it’s so rewarding when they get it right!

The hardest part of the PonyMom gig is that you have to fake that you’re not scared when they fall. It will happen again at some point for sure, even when you do everything right, but it’s probably the most important lesson they will learn—sometimes you fail ,and it’s okay. You just learn from your mistake and try again.

We started a tradition when PonyKid was little: to celebrate the falls. Falling means you learned something. Maybe you learned your heels weren’t down, or maybe you needed to sit up— there’s always a lesson, and learning deserves celebrating. We go get ice cream or some other treat to celebrate the learning.

So what to do after the fall? Expect some regression. It’s totally normal. Much like everything else with kids and ponies, sometimes it’s one step forward and two steps back. Fear is a normal response (and one that is designed to keep us safe). It’s okay to be nervous. Allow your ponykid to take a step backward to a trusted lesson pony, or cantering poles if they tumbled over a jump. Maybe a neck strap for extra security for a couple rides will give both of you a little peace of mind.

But I do think it’s important, as long as they are not seriously injured, to get right back on the horse. Even if just to walk. Even if you’re scared too. We as a society want to bubble wrap our kids. If we want them to participate in a sport that is innately dangerous, we are going to have to give up some of that bubble wrap.

The day I knew we had finally conquered the fear of falling was at a show. She and the pony parted ways and by the time she popped right up on her feet she was already asking “Momma, did you get that on video?!” She made her way to the mounting block before I could even get to the ring.

That was the day I knew I had a real rider on my hands. The fear of falling had been replaced by the fear of not trying again, fixing her mistake, and making it right.