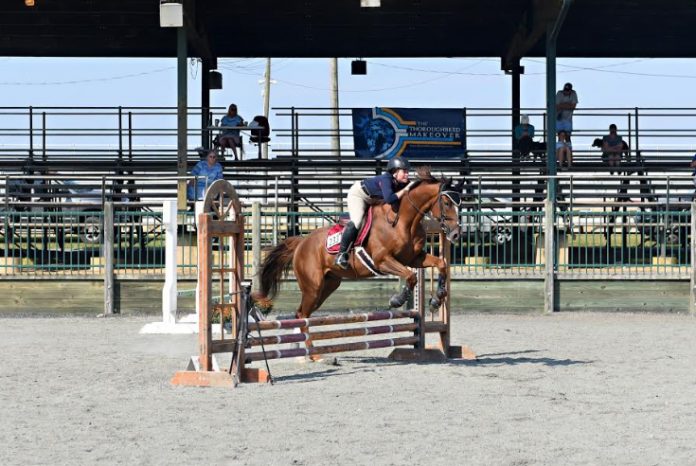 December 5, 2019 (Fair Hill, MD) – The Fair Hill Thoroughbred Show (www.fairhillthoroughbredshow.com) had its best year ever, according to president Lisa Demars.

“We had more than 125 riders competing with their Thoroughbreds in hunter and jumper classes. Each of these teams was in the process of retraining OTTBs for a new discipline. And they are doing really well! We are very proud to support these riders,” said Demars.

The show offered competitors the opportunity to enter a drawing to earn one of 15 spots in a free clinic led this year by Comdt. John Ledingham of Co. Meath, Ireland, and held at The Stables at Fox Crossing, Cochranville, PA. Comdt. Ledingham was a member of the Irish Army Equitation School until his retirement in 2002. He competed in the Seoul Olympics, three World Championships, three European Championships, 15 Aga Khan Nations Cups and 63 Nations Cups for Ireland. Comdt. Ledingham was also a three-time winner of the Hickstead Derby and the Hickstead Speed Derby, and four-time winner of the Royal Dublin Horse Show Puissance setting a record of 7’5” in 1987!

Since his retirement from the Irish Army, Comdt. Ledingham has been Chef d’Equip of Irish Junior Teams, winning four gold, two silver and two bronze medals at European Championships and a gold medal at the Youth Olympic Games, Nan-jing, China. He was Irish Equestrian Team manager, Athens Olympics; Coach to Irish Modern Pentathlon riders at the London and Rio Olympics; Chef d’Equip World Breeding Championships, Lanaken, Belgium where Irish-bred horses won two gold, three silver, and two bronze medals; Coach to the British Equestrian Federation Showjumping Pathway (2010-2016); Chairman of the Coaching Committee, Horsesport Ireland (2002-present); three-time Coach of the Year and he is a recipient of an FEI Gold Medal.

This year,  the FHTS again awarded $500 TERF Good Ambassador Scholarships to select competitors program. sponsored by the Thoroughbred Education and Research Foundation. The award is designed to support riders who have demonstrated – while at the show – an ability to retrain their thoroughbred.  Riders are nominated by the judge and show manager, and then asked to submit a brief essay describing how they would use the scholarship to further their riding careers.

This year’s scholarships went to:

“The philosophy of the show is simple. Every Thoroughbred needs a chance to live a great life after racing  and every owner/rider should have the opportunity to enjoy these wonderful horses in a welcoming and open environment,” said Board Member, Dixie Abbott.