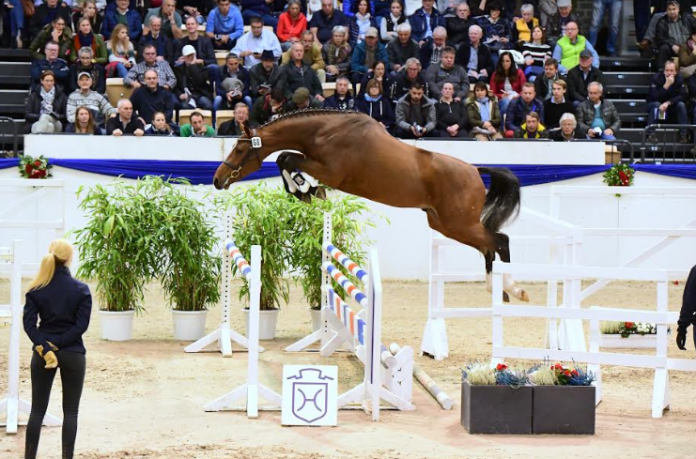 The approval process starts with presenting the two year old colts to the breed associations stallion selection committee.  Of those presented, the committee then pre-selects a handful of the colts amongst hundreds who will be eligible to attend the stallion licensing. They are selected based upon their quality in type, movement, jumping ability and pedigree. The stallion licensing spans several days as the colts are presented in-hand, on hard ground, at liberty and in free jumping. On the final day the approved stallions are announced, and for the owners who have opted to participate, auctioning of the approved and non-approved stallions.

Urthago HS was bred and raised at Hyperion Stud’s operation based in Holstein, Germany.  “Holstein was a tough road for approval, but we are so proud of the horse and everyone involved in making him. We relied on genetics that could upgrade the horse type to this modern sport era while giving back the blood of Carthago” said Hyperion Stud owner Vicky Castegren. Urthago HS will be developed for sport and shows tremendous potential for breeding. He has a most interesting pedigree with a sire line that boasts some of the best show jumpers the world has ever seen including Untouchable, Carthago and Casall who are legends of showjumping. In the line of four we find perfect sex balanced linebreeding to Carthago through his son Mylord Carthago and the Carthago daughter Ligusta, who herself received a ten for jumping at her mare performance test.  The Corde la bryere mare is none other than Cicera, full sister of the legend Cavalier Royale and Cicero. Cicera is also mother of the approved stallion Ciceras Icewater by Corofino I. Many international sporthorses and approved stallions have come from this motherline including VDL Groep Spiga, Kyra, Verdi and Calato to name a few.

Dr. Thomas Nissen, the Holsteiner Verband breeding director, recently provided the following evaluation of Urthago from the approvals to Pferd+ Sport Magazine [translated from German to English] “An outstanding representative type of the Holsteiner breeding with high exterior bonits. With his pretty face and modern outfit this Uriko son showed all days in Neumünster his very sporty type. This very modern and sporty type in combination with already very good stallion presence and top correctness makes him an outstanding horse. Type and conformation shows in all parts a perfect combination for a modern sporthorse and a stallion. In all different parts of the approvals he showed his big value as a stallion and modern sporthorse. His top correctness and conformation makes it easy for him to show super movements in all 3 gaits. Walk is elastic and well balanced  (regulated) , especially trot and canter are top quality because of the super active hind end and this you could see especially in jumping. In jumping the stallion is demonstrating a top forward canter with a perfect bascule and reflexes in combination with top scope.His very exclusive pedigree is also showing his big value as a stallion and a sporthorse”.

Leviathan HS was purchased by Hyperion Stud as a foal and has been carefully developed as a stallion prospect. At the approvals, “Leviathan showed his scope and ability and looks to be a top prospect for sport” said Hyperion Stud owner Vicky Castegren. His sire line includes 1.60m show jumpers including, Livello, winner of the Falsterbo Nations Cup, the legendary Olympic competitor, Casall, and, Calando I, who was German Champion in 1984 under Karsten Huck. Leviathan’s motherline has produced numerous Staatsprämie mares and successful sport horses competing at 1.40m+, and his dams sister is the mother of Casallvano who is competing at the top of the sport at 1.60m GCT classes and 5* Grand Prix with Marco Kutscher.  From Stamm 741 come many top international show jumpers including; Leonardo under Franke Sloothaak, Chagall Orion under Mario Deslauriers as well as VDL Cardento, who won the team silver medal under Swedish Peter Ericsson at the Athens Olympics 2004.

Hyperion Stud is dedicated to breeding, raising and training top show jumpers worldwide.   Hyperion Stud is a global operation with farms in Virginia and Wellington, Florida with breeding and training operations in Holstein, Germany and Holland.  Their experience breeding and developing top horses for sport, coupled with a close connection to European breeding and performance gives them a pulse on breeding trends for world-class horses.   Being based in the US, they have a unique understanding of the American market and what the riders are seeking.

Brooke Kemper and Rocket J Squirrel Top the Podium in the...