Calling all trainers, riders, and breeders of young horses – USHJA has proposed a Young Jumper Championship for 2021 that would showcase the up and coming, talented prospects of the industry.

This proposed championship has conceptually been approved by both USHJA and USEF. It now just needs final voting by USEF to continue forward. The event would allow young jumper horses aged 4, 5, 6, 7, and 8 to qualify and compete for great prize money at a national level. The goal is to make qualification as inclusive as possible in order to showcase as many young horses as it can.

The success of these championships are vital to growing American sporthorse breeding. USHJA believes that this championship would give grassroots breeders in the United States motivation to improve the breeding and development of young horses. The hope is that these championships would give both young horse trainers and American breeders a goal to work towards as well as encourage them to focus on the importance of correctly developing young horses. The opportunities this potential championship could bring are encouraging for the growth of our sport in the United States.

The proposed championship would be a three round competition separated into two qualifying rounds and one final, with a goal of offering $110,000 in prize money. The final would take the top 15 horses, and prize money would be rewarded all the way through fifteenth place. For the horses who do not make the top 15, there will be a consultation class offered, highlighting how the emphasis of this competition is to give young horses a chance to learn and compete at a national level. On top of the overall class winnings, there will be an American Bred prize money bonus for horses foaled on American soil.

More educational information will be released to the public if approved by USEF. 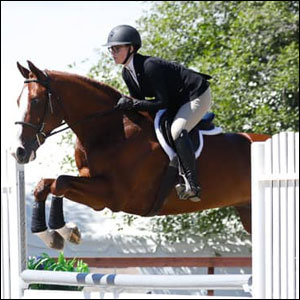 About the Author: Tori is an 18 year old freshman honors student at the University of Colorado Denver. She has ridden horses for her entire life and works as a working student at White Harvest Farms in Brighton, Colorado and is a photography/journalism intern for The Plaid Horse.