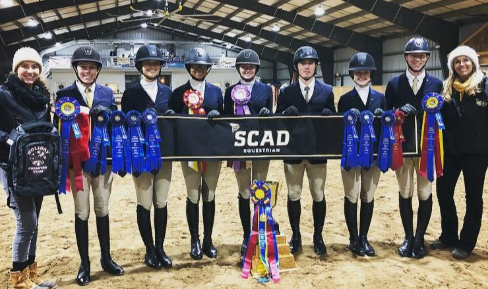 SCAD won their seventh straight Tournament on December 7, 2019, hosted by Penn State at The Grier School in central Pennsylvania.  SCAD’s Adam Edgar won both the open classes and the High Medal – his second; Brady Martino won both Limit classes and the Low Medal – his FIFTH, which is an all-time Tournament record.  But the big story was that SCAD scored a team total of 54 points out of a possible 56 – one second-place ribbon short of a perfect score. The SCAD score was the highest team score in the 28-year history of the Tournament of Champions Series.   The previous high was SCAD’s 49 at 2017 Preseason Classic at Randolph College, then Centenary’s 46 in 2016 at the Holiday Tournament at Centenary.  SCAD has four prior Holiday Tournament of Champions titles with previous wins in 2018, 2017 and 2014.

Miami had a strong start, with a 2nd and 1st in the first two classes – Open and Intermediate fences – to mount the only real challenge to SCAD early in the day.  Seton Hill also started strong, and Mount Holyoke was excellent as usual, with three blue ribbons to claim the Reserve Champion spot.  SCAD was one of two teams to score points in every class, with an unbelievable seven blues and a red. Goucher also got a ribbon in every class.  Penn State and Goucher were the only other teams to win more than a single blue ribbon, with two apiece.

In the Equestrian Talent Search Medal, outstanding high school aged riders competed for prizes and the attention of college coaches.  They also had the opportunity to work with the coach of their choice for the day. The winner of ETS Medal was Lindsay Shaw, senior at The Grier School, working with the Otterbein University coaches.

The Tournament’s 28th Annual season will continue January 25, 2020 at SCAD Equestrian Center near Savannah.  The season finale will be March 14 at University of Findlay in Ohio.

Questions concerning the Tournament should be addressed to Tournament Director Jim Arrigon at jimarrigon@hotmail.com.

All photo credits to Jim Arrigon.