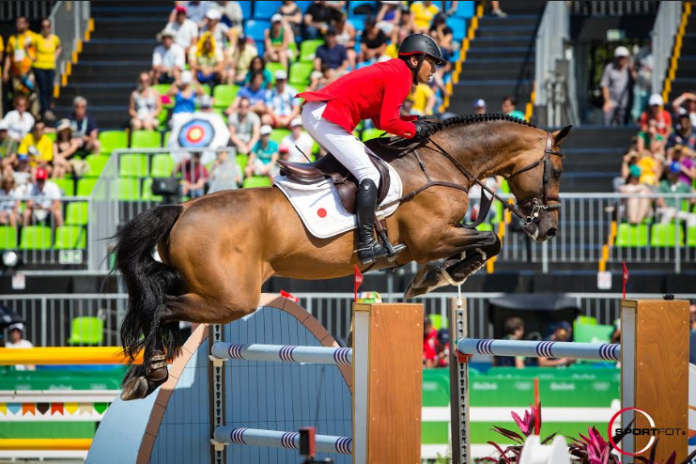 Olympic competitor and breeding stallion Imothep has returned to the United States and was  joined by Hyperion Stud’s Holsteiner approved stallion Cool Jazz. “This officially marks Imothep’s retirement from sport and we are excited to offer North American Breeders access to this super stallion for the first time in many years via fresh collections,” said Hyperion Stud owner Vicky Castegren. Olympic Imothep is a 2003 KWPN stallion by Indoctro x Calvados x Dominard and is approved for breeding by the BWP with the Ambassador designation, KWPN, Holsteiner Verband, OL, RSPI/Westfalen NA and ZfdP. Highlights of his illustrious career in sport include competing at the 2016 Olympic Games in Rio for Team Japan with Taizo Sugitani, a 12th place finish at the World Equestrian Games in 2014, and being part of the Nations Cup Team Ireland in Aachen, Dublin and Hickstead in 2014 with Darragh Kenny. In honor of his retirement, breeders can take advantage of a discounted stud fee for the 2020 breeding season.

Cool Jazz is a 2012 Holsteiner Approved Stallion by Colman / Cascavelle / Sacramento Song xx from stamm 238. He was licensed by the Holsteiner Verband in Neumunster in 2014, the following year he successfully completed and passed his Stallion Performance Test in Germany to become fully approved as a Holsteiner breeding stallion. “Cool Jazz is a really interesting stallion for sport and for breeding. We purchased him from the Holsteiner stallion selections in Neumunster where his quality in type, movement and jumping was apparent,” said Hyperion Stud owner Vicky Castegren. He successfully competed in the young jumper classes in Europe and will continue his development in sport in North America.”We feel this stallion will be an asset to North American breeders and are very excited to make him available via fresh collections in 2020,” said Hyperion Stud owner Vicky Castegren.

Hyperion Stud is dedicated to breeding, raising and training top show jumpers worldwide. Hyperion Stud is a global operation with farms in Virginia and Wellington, Florida with breeding and training operations in Holstein, Germany and Holland.  Their experience breeding and developing top horses for sport, coupled with a close connection to European breeding and performance gives them a pulse on breeding trends for world-class horses. Being based in the US, they have a unique understanding of the American market and what the riders are seeking. Hyperion Stud has a large variety of horses available for sale, from young jumpers, horses competing at 1.40 + meter level, approved and licensed stallions, breeding stock, promising foals and young prospects. They also stand a roster of nearly thirty accomplished stallions, including Imothep, Dakota VDL, and Chin Quidam VDL as well as many other top stallions. To learn more about Hyperion Stud, please visit hyperionstud.com.