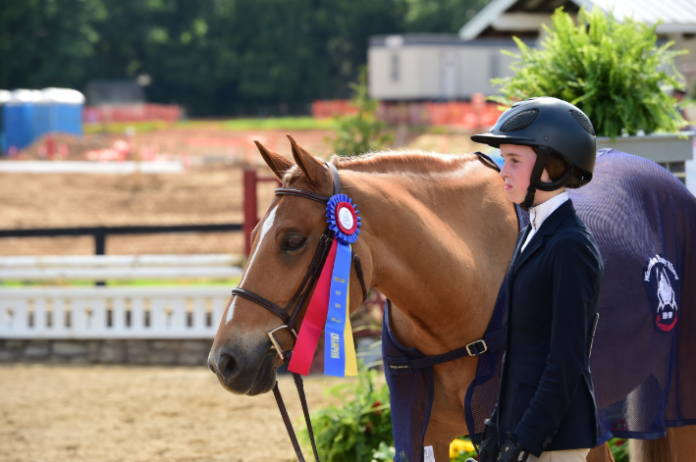 Fourteen-year-old Skylar Boehm doesn’t come from a long line of equestrians. She isn’t even second or third generation, but that doesn’t matter. She brings heart, determination and perseverance to every ride.

Skylar started riding at only three years old, when her family lived in Rhode Island. A nearbypark offered $5 pony rides.

“I promised her that when we moved here (Virginia),” mom Lonnie Boehm said, “she’d be able to ride again. That’s when the spark of this horse thing began.”

And it hasn’t stopped, or even slowed down.

Skylar is now in 9th grade and competing in the hunters as well as equitation.

“We found a trainer when Skylar was three-and-a-half years old to start lessons. They went from a half hour to an hour and when she was six, she started showing,” Lonnie said.

By the time Skylar was eight, she switched to a barn that focused more on showing and most recently, has moved to Rose Mount Farm in Spotsylvania, VA, with trainer Ann Garnett-Wheeler, who is more focused on rated circuit shows.

At this year’s Warrenton Pony Show, Skylar’s first time at the show, she competed with her pony, Why Not Wiley, known around the barn as Wiley.

“To be able to win both of the medal finals was a good experience,” Skylar said. Lonnie couldn’t agree more.

“It was a great day for her at her first Warrenton Pony Show,” Lonnie said, “and it was a phenomenal day for her and Wiley.”

Though Skylar will still be eligible to compete on ponies next year, she is focusing on her future and the move from ponies to horses. Since she has NCAA level riding aspirations, Skyler wants to get comfortable jumping 3’6″ on horses in the near future.

“It’s very exciting, because I have so many goals I want to achieve, and owning a horse (rather than owning a pony) is required for those goals. I’ll always love riding ponies, but I am eager for the change,” Skylar said.

As a result, the Boehm family made the very difficult decision to sell Wiley. It was not one made without thought, or careful consideration.

“Wiley has done so much for me, and really got me to where I am today,” Skylar said. “He gave me so much confidence, and I know he’ll do the same for his new owner! I have so many memories with Wiley, but a few of my favorites are: the Warrenton Pony Show, the Deep Run summer show and the James River horse show. Although, simply riding Wiley was always so enjoyable.”

Now, they have “Titanium Z” (Tanner), a Zangersheide (Belgium Warmblood), who is almost 17 hands.

“I am extremely looking forward to, eventually, competing in big equitation classes,” Skylar said. “Riding on an NCEA team in college is what I’ve always wanted to achieve, and riding competitively in these classes will get me there.”

While Skylar makes the transition to riding horses and higher jumps, she is looking forward to Maclay qualifier classes.

“My long-term goals,” she said, “are to compete in the Maclay and hopefully go to the Maclay Finals and compete there. I feel like it’s one of the highest-level classes you can qualify for, and I really want to do that.”

For the remainder of the year, Skylar plans on showing at the Mid Atlantic Equitation Festival (Nov. 15-17) and the Barracks (December).

Along the way, her family will be there cheering her on. Her father, John, enjoys spending time at the horse show, providing an extra set of hands and helping Skylar.

“I’m usually with her at most shows, just to help her through things,” he said. “We have good days and we have bad days. We try to endure both. She competes at the IEA [Interscholastic Equestrian Association] level also, and we spend time together. Showing is a great opportunity for father and daughter to spend some quality time.”

It’s also a wonderful way for the family to bond. Skylar is one of six children – ages 20, 14, 12, 7, 6 and 4 years old. The Boehms are a treatment foster care family, currently with three special needs siblings in their care while they go through the lengthy adoption process.

“We are a horse show family,” Lonnie said. “It’s just a nice way to spend the day to support Skylar. It’s what you do when you’re a family.”

“I call us the ‘circus is coming to town family’ because we breeze in with all our chairs and picnic blankets. Horse shows are so reserved and quiet, even though the kids stay quiet and sit nicely for 9 hours, for a 14 year old to have her younger siblings there, it’s kind of an annoyance thing, but it’s the kind of family that we are.”

They typically take two cars to a horse show, so Lonnie can leave with the other kids, and John can stay with Skylar and watch the other riders, if things become too much.

“They can get a break and go home if it starts to get long,” John said.

“Skylar works very hard at being the best that she can be. A lot of the sport comes from continual practice, learning from mistakes that occur, and really working hard to not relive those mistakes. She lessons anywhere from 3-4 times a week and hacks the other days. She’s almost six days a week on her pony, or horse, whatever she can get on.

That’s the thing I’m very proud of as a father, all the time and dedication that she puts into it and how seriously she takes this sport,” he said.

Photos © Teresa Ramsay, Member of the Warrenton Pony Show board of directors and show photographer; Photos also courtesy of the Boehm Family.