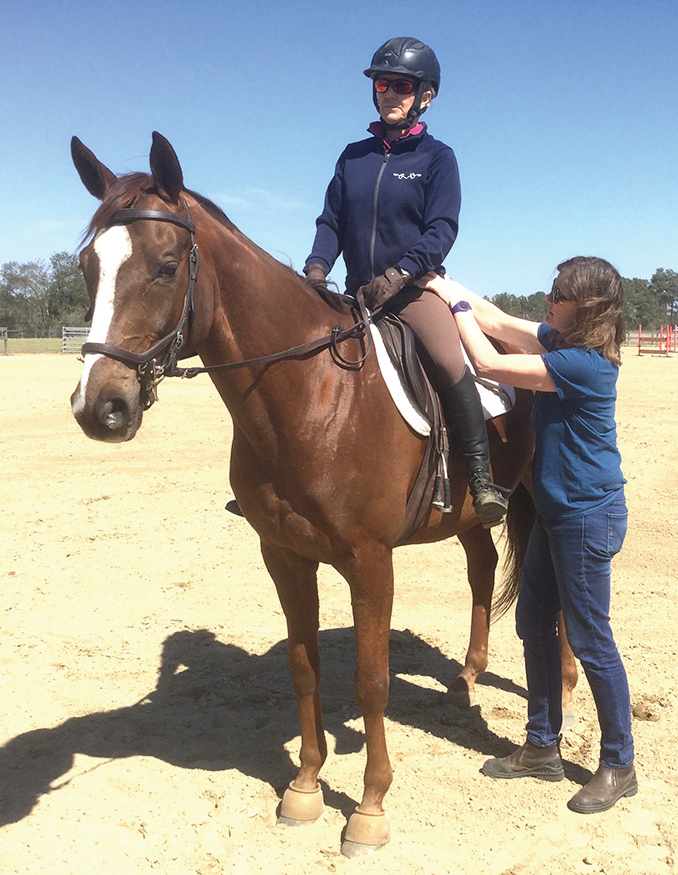 Have you ever had lingering pain from an injury? Has your horse ever duped the vet? What about that time you tweaked your back?

Do you know about “ortho-bionomy?”

If you answered no, it’s worth your time to find out about its benefits for both you and your horse.

Jenny Hunt, a horsewoman with decades of experience grew up in England. There, she was recognized as an assistant instructor by the British Horse Society. After college, she moved to the U.S., and she ran a teaching and training business in Connecticut for hunter/jumpers. After that, she managed elite facilities, and trained with eventing coaches throughout the U.S., like legend Jimmy Wofford. Along the way, she also worked as a vet tech for Dr. Harry Werner, VMD.

However, a fall from her personal horse sent her in a different direction.

“I became interested in bodywork for horses after a fall from my horse, Ellie,” Hunt, Lafayette, Colo., said. “In rehabilitating my neck with somatic work, the person working with me suggested that I get Ellie worked on.”

That was the beginning of Hunt’s journey with non-invasive therapies, and as a horse owner she discovered “rolfing.” Rolfing is a therapy that uses manipulation of fascia to reorganize connective tissue which then realigns and balances the whole body.

“The results with my mare from rolfing were structural and had a great effect on her,” Hunt recalled. “I studied equine rolfing from Jim Pascucci. I also took a few courses in equine craniosacral which improved and deepened my work even more.”

Determined to expand her education in the area, she began taking Equine Positional Release classes (EPR) from Zarna Carter. There, she studied for 15 months, learning a curriculum that was based mostly on ortho-bionomy. During that time, Hunt realized the importance of studying ortho-bionomy to bring lymphatic and visceral perspectives to her work with horses.

Ortho-bionomy is based on osteopathy and is gentle and non-invasive. It’s an alternative, but not an opponent of chiropractic medicine. Hunt places a joint in a position of ease which creates relaxation in and around the joint, and by adding a small compression, stimulates the proprioceptive nerve endings which allows the nervous system to self-correct and realign the joint.

Hunt explained, “ortho-bionomy follows the principle that structure follows function. It is a way of working with the body to improve function.”

Sessions range in length, but improvement can be seen after just one session. In order to address multiple areas of need and maintain changes, Hunt recommends starting with three or four sessions, spaced one to two weeks apart.

“I had known for years that riders reflected the patterns or even created the patterns in their horses and although I always suggested they go help themselves, it usually resulted in a gentle massage that did nothing structurally for their bodies,” Hunt recalled.

Susan Moore sought Hunt out to aide her gelding in achieving a healthy balance. Moore owns a performance horse who had a suspensory injury, and was laid up through initial rehabilitation. Hunt worked with the injured horse and supported his healing process.

Moore said, “I ended up moving him to Jenny’s house where she could keep an eye on him. I think her being able to get her hands on him on a regular basis saved him. In partnership with a vet for the last two years, she’s been able to hugely assist in his recovery. I’m now riding him and bringing him back. He has maintenance sessions with Jenny once a month, or more, if needed.”

Hunt has been adamant about continuing her education; there is always something more she feels she can learn. Currently, she studies with Sheri Covey and Melinda Doden at the Rocky Mountain Ortho-Bionomy Center (Colo.).

“The most efficient way to live is in balance,” Hunt explains, “The majority of time, when we move away from balance, we are moving away from healthfulness.”

Hunt is now expanding her practice to work with human-equine dyad, as she finds many patterns are mirrored between horse and rider. Whenever possible, she likes to make some physical corrections for the rider, while the rider is in the saddle on the horse.

“Trauma is held in our bodies,” Hunt explains, “We stop noticing compensatory patterns created by pain.”

Moore supported Hunt’s theory. “It’s a body awareness she helps create within you,” she said. “She’ll feel things and you’ll say, ‘You’re right, that’s been a little off.’”

Her services lead to results for both horses and humans and her schedule now takes her across the country to provide sessions for clients. Although Hunt incorporates other areas of her training in sessions, as appropriate, she shares that with ortho-bionomy, “the focus isn’t on the symptom; it’s on the cause.”

Additional information, as well as how to schedule an assessment, can be found at horsehoundbodywork.com.

This article originally appeared in the April 2016 print edition of The Plaid Horse.

A Horse Owner’s Guide to a Safe and Effective Fence