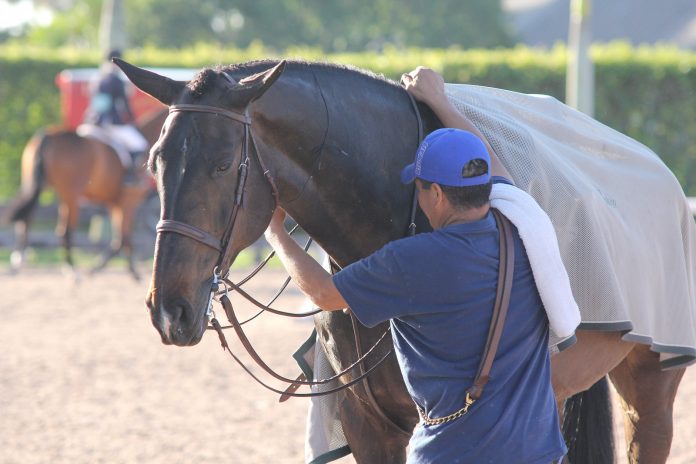 Ocala, Florida, March 11, 2020– The Grooms Award, Ltd. presented gift bags to the grooms of the horses that competed in the Grand Prix CSI5* at the Winter Equestrian Festival in Wellington FL, on March 7 and the Longines FEI Jumping World Cup held at the Live Oak International in Ocala, Florida on March 8. The Grooms Award Ltd., a non-for-profit organization, celebrates professional hunter/jumper grooms and their dedication to the care of show horses.

“We were thrilled to hand out bags to the deserving grooms who work so diligently getting these horses ready to compete,” said Andrea Mewhinney, Director of The Grooms Award, Ltd. “Their dedication and hard work is vital to each horse’s success and for that they deserve to be in the winner’s circle themselves.”

Ashlee Bond piloted Donatello 141 to their first five-star victory in the $401,000 Douglas Elliman Real Estate Grand Prix CSI5* at the Winter Equestrian Festival. Sharing in the victory was Donatello’s groom Hugo Ramirez. Daniel Coyle rode a beautiful round to clinch the win of the Longines FEI Jumping World Cup at the Live Oak International. Sharing in his victory was his groom Uli Paulischta. Both winning grooms were awarded a tote bag from SmartPak that included a gift from EquiFit, a Grooms Award check for $150, a special edition Grooms Award hat, an item from Got Salt?, Boy-O-Boy Bridleworks custom belt, items from Sterling Essentials, the #groomsrock hammock, and Lucky Braids shampoo.

Created to recognize the workers “behind the scenes,” the Grooms Award was named for Moira Caffarey (who unexpectedly passed away in 1997) and later George Hennessy (transporter for former USET). Moira cared for 1983 FEI World Cup Champion, “I Love You,” who was inducted into the Show Jumping Hall of Fame in 2014. Friends of Moira donated a trophy for the first-ever grooms’ award at the Pennsylvania National Horse Show (Harrisburg) where individuals and companies donated prizes to be given to the winning groom. As donations increased each year, it was decided that each of the Grand Prix grooms deserved a “Thank You” for their efforts and professionalism. A tote bag from was awarded to each Grand Prix groom, filled with goodies and gift cards from generous sponsors.

For more information, or to donate, please visit www.groomsaward.org. The Grooms Award, Ltd. is also on Facebook and Instagram #groomsrock.