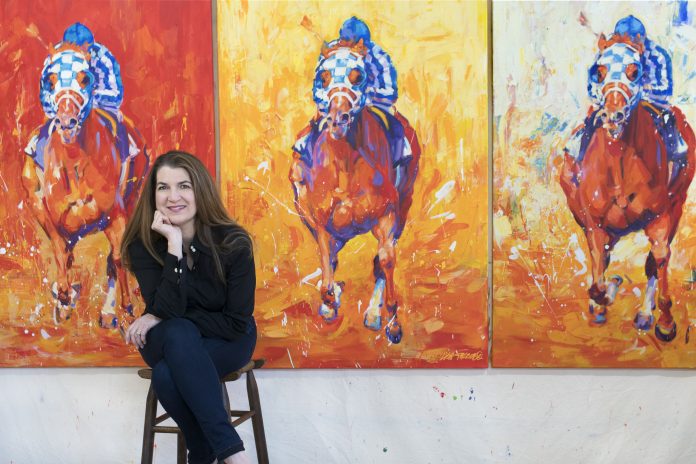 THE WORLD’S MOST FAMOUS & ICONIC HORSE HONORED FOR HISTORIC ACHIEVEMENTS

Secretariat was born March 30, 1970. He became an American Thoroughbred racehorse who, in 1973, became the first Triple Crown winner in 25 years. His record-breaking victory in the Belmont Stakes, which he won by 31 lengths, is widely regarded as one of the greatest races of all time.

“I was thrilled and honored to have been chosen as the featured artist to showcase my work that captures the beauty and magnificence of Big Red – a national and beloved racing hero,” said Lisa Palombo. “As we all know, Secretariat was far from any ordinary racehorse. In the sporting world, he’s often mentioned in the same breath alongside some of the human all-time greats.”

Featured work in this special collection includes, but is not limited to “The Belmont,” “The Derby,” and “Little Big Red,” an acrylic-on-canvas which captures Secretariat’s greatness as a young foal in The Meadow where he was born.

Lisa Palombo is a renowned contemporary American Impressionist known for her expressive brushwork and fearless use of color. Her equine, polo and horseracing paintings are especially masterful, capturing the elegance, motion and thunder of these magnificent animals.

Lisa began her formal art education at the age of nine while spending summers at the acclaimed Rhode Island School of Design (RISD). She later graduated from RISD with honors and has been painting professionally for over 30 years. Her awe-inspiring artwork adorns the walls of private collectors and corporate collections worldwide.

Which will be the most popular equestrian events of 2022?

What are the Three Most Popular Forms of Betting for the Horses?