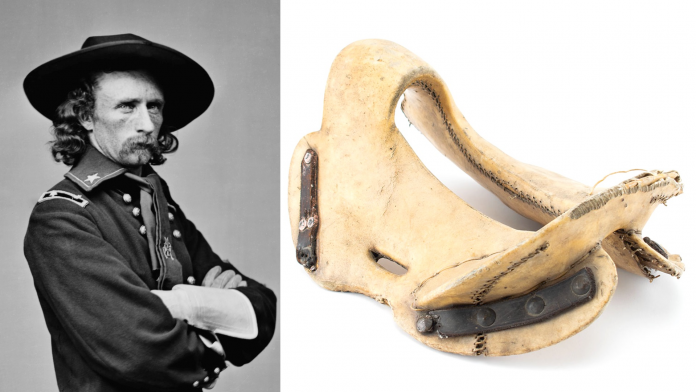 The racing saddle of George Custer circa 1870s, meticulously crafted with a vellum exterior. A passionate horseman, Custer owned and raced several thoroughbred horses in Kentucky; his best, Frogtown, had a great spring meeting at Lexington in 1872, winning the mile and a quarter and mile and three quarters dashes, both in record times. Custer decided to sell Frogtown in April 1876—two months before his famous ‘last stand’—because his duty out West prevented him from ‘giving so noble a horse the proper attention.’ This sleek saddle, a scaled down version of the McLellan style of the Civil War, would have been a prized possession—as an expert cavalryman, Custer knew the value of a light and well-made saddle on the battlefield and on the racetrack. In very good condition, with overall wear and soiling.

This saddle is illustrated in Lawrence A. Frost’s 1986 book General Custer’s Thoroughbreds: Racing, Riding, Hunting and Fighting. A first edition of the book is included, inscribed by the author to the former owner of the saddle: “For Jim Strain, longtime friend and Custer buff who owns Gen. Custer’s racing saddle—with all good wishes, Lawrence A. Frost.”

Also accompanied by a comprehensive provenance packet, detailing the unique history of this historic relic: the paperwork present includes family histories, letters, and documents concerning the saddle, which was obtained by James P. Strain circa 1928 from John Kirkpatrick, a descendant of the Custer family who possessed a trunk of family heirlooms. Based on correspondence within this folder, it appears that the saddle was exhibited at the International Museum of the Horse in the mid-1980s.

“It’s an exceptional piece of Custer history, bringing to life the connection between his work as a cavalry officer and his passion as a racehorse enthusiast,” said Bobby Livingston, Executive VP at RR Auction.

The Fine Autographs and Artifacts Featuring Civil War items from RR Auction began on April 17 and will conclude on May 13 at 7:00 PM ET. For more information, go to www.rrauction.com.