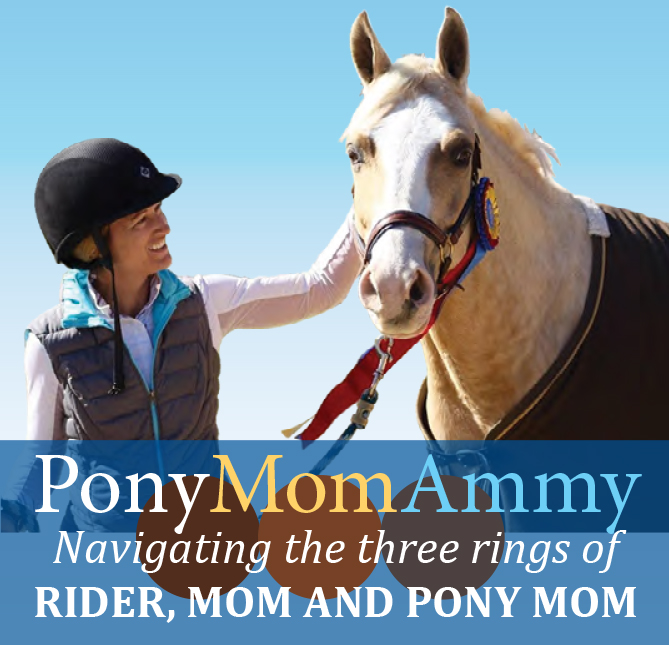 I have always said that having horses is my therapy. I justify the expense of ponies by saying that it’s cheaper than having a psychologist on call 24 hours a day… I can’t bring myself to actually do that math though, because I am quite certain I could go back to school, get my very own PhD in Psychology, and help myself, for less than it costs to maintain a couple show horses, but I digress. On the back of a pony is where I have always found peace. Sitting in a stall is where I do my best thinking. Through every single major event in my life, horses have been the one constant. My decidedly non-horsey husband will even say “you really need to go sit on your pony” when I am feeling especially stressed or anxious. In my experience, there are few things in life that a good ugly cry, and listening to a horse chewing hay, cannot at least improve.

But what do we do when, the one place that has always been our source of comfort and confidence, becomes a place of self-doubt and insecurity?

“Comparison is the thief of joy” is one of my favorite sayings because it’s so true. Nothing can change my perception of my own progress faster than watching someone else do it better, or faster. But when we go to horse shows, this is exactly what we are paying someone to do…compare us to the other riders/horses in our division. Who had the best trip out of the entries on that day. Even more difficult is that you could theoretically have the exact same trip two days in a row and win on day one, and not place on day two…it just depends on how everyone else did as well.

I have left shows wondering why in the world I continue to spend time and money to go to shows, when I know I could go have a nice happy hack at home and feel better mentally than showing for days, and then suffering through the inevitable horse show hangover. We do it because we are chasing perfection. We had that one trip that was flawless, and we chase down that feeling like a drug addict chasing a high.

I can count on one hand the number of “perfect” trips I’ve had (and I don’t even mean truly flawless, but trips where there is nothing I would change) in 40 years. I have never had the benefit of being given a “made” horse to ride, so knowing that I put in the actual blood, sweat and tears to make those handful of magical trips happen, only boosts the feeling of accomplishment. For my PonyKid, I want her to feel that same joy and personal satisfaction. For this, and admittedly for financial reasons, I would prefer for my PonyKid to bring along her own green beans.

But this level of perfection she is chasing is all too fleeting. Her last pony, who she brought along well enough that he is now introducing a new small child to the joys of showing, was not an easy ride, but she worked through the challenges and the day they had that absolutely perfect trip was as exciting for me as it was for her. It was the stuff dreams are made of. It was spectacular…and is now the place where her success bar has been set. In this age of social media posts that highlight the good, and minimize the bad, it’s a challenge to remember that the only person you have to beat is yourself.

PonyKid just got a new pony three weeks ago and I am not afraid to admit that I wasn’t sure they were ready to go to a show just yet. He’s a great guy but green and only has a few shows under his belt, and again, we’ve only known him for 3 weeks! But “everyone else” was going, so I agreed with the condition that we were going to have very realistic goals (like “just don’t trot when you should be cantering,” kind of goals) and be happy as long as kid and pony tried their best and had good attitudes. This pony is entirely her project, and while he does get training rides at home, this show was a test to see how she could handle doing it all without help. In that regard, she did a phenomenal job! Understandably he was a little excited the first day on the show grounds, but she rode through the issues, schooled him herself every day. I never so much as lunged him for her.

Saturday, they truly exceeded my expectations. Kid did everything our trainer told her to focus on. There were some hiccups, of course, but really was so very impressed with both of them.

Sunday, they looked great in the schooling ring and I was excited to watch them go again. I assumed my position far from the ingate so as to not interfere (y’all the struggle is so very real) and as soon as they walked in, I could tell something was off. Her body language looked defeated, her eyes looked distracted, and they found a whole new set of issues they had not had the day before. Missed lead changes that had not been a problem, were suddenly an issue. Distances became illusive. It was as if someone had flipped a switch and we lost that confident kid we had just the day before.

When I walked over after she was finished with her trips, she was visibly upset. I thought it was simply frustration, but after talking to her, she confessed that she had heard a couple trainers sitting on the other side of the course board discussing how her new pony was a bad fit for her, and how her riding would suffer as a result of riding something so green. Y’all, my heart sunk. Because that is all it took for doubt and insecurity to creep in…some casual words from someone else, can kill confidence faster than her actual riding ever could.

And this, friends, is when it hit me (well after I got over the initial anger of what she had overheard): I am sending my kid, who is a teenager and sensitive, into a literal arena, to be compared to her peers. Then to add insult to injury, she will look at all the social media posts that show the flawless moments from other’s rounds. I didn’t do a good enough job preparing her for the inevitable letdown. Because in her mind, anything short of perfection wasn’t going to be good enough. Maybe we should have waited a little longer before going to a show – though I think she needed to know that she has it in herself to do this, and do it well. But maybe we should have had this conversation before we got to the show grounds…

We talked about how, while in the ring she is being judged against others, truly the only person she needs to ride better than, is the person she was yesterday. We judge our success, not by ribbons won, but by milestones met. When you are riding a greenie, not in a green division, you are comparing apples to oranges, but calling them all apples. And while, at the end of the day, she will be a better rider for having put in all the work, and she will have a skill set many riders do not, there will be more shows where she leaves feeling defeated, despite major accomplishments.

The bank of confidence is quite fickle, and it’s far easier to make a withdrawal, than it is to make a deposit. A very wise trainer told me when I was younger that “we don’t lose. We either win, or we learn,” and my kid is learning so much. I am so grateful for that. I am grateful that she has the support and the talent to bring along green ponies and learn these life lessons. She will look back and know that she may have had to work harder, but she will appreciate knowing the work that went into that winning round (because they will get there) is all thanks to her own efforts. Yes, we could have bought something that had been there and done that, and maybe she would have walked away with more blue ribbons, but she could not have the same personal satisfaction.

Those of us who ride, know that this sport is as mentally demanding, as it is physically demanding. And our horses and ponies are excellent at picking up on our doubts and fears. As their leader, especially on the green ones, they look to us to have enough confidence for us both. For now, I believe in the kid and the pony enough for all of us. I will continue to remind her that what someone posts on social media rarely paints the entire picture (and that goes for me and her as well). Most of all though, I will remind her that when she is feeling the most frustrated, often the best thing to do is go for a happy hack at home and then have a good ugly cry while your pony nibbles his hay…reconnect with the source of comfort and confidence, and remember why you started this journey in the first place.

Originally from the April 2020 issue.

Wit and Wisdom from a Horse