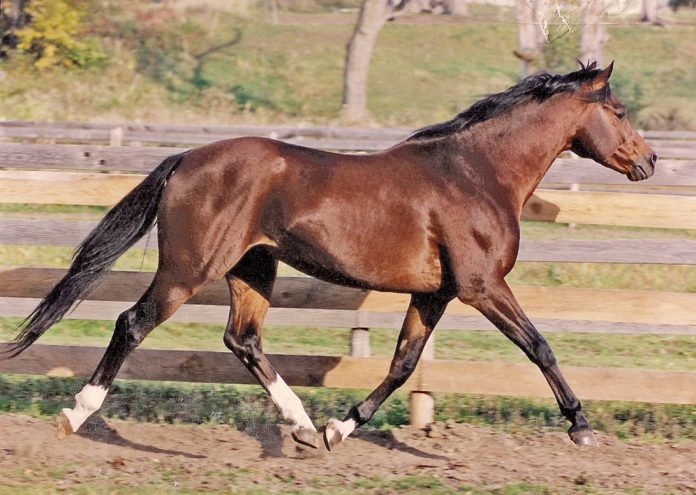 At the end of 2014, the pony world lost one of the greats, Hidden Creek’s Rain Fox, one of the first crossbred stallions. His life was both long – he was 31 years old – and productive – his last foal was born in 2014. Standing at Champlain Isle Farm in Vermont with Amy and Randy McCoy for the last 20 years, Rain Fox contributed greatly to the fierce competition and excellence we see in the pony hunter divisions today.

“Foxy” was bred by Marguerite Taylor, out of a Thoroughbred mare and by her legendary stallion *Cymraeg Rain Beau. He started his career winning by being the overall Pony Hunter Breeding Champion at The Devon Horse Show three times- as a yearling, two year old, and three year old. “Marguerite is the quintessential pony breeder in this country. She has done all of it. She really bred a lot being in the thick of things in Virginia,” says Amy McCoy.

After breeding him with a heavy schedule at her farm in Virginia, Taylor sent Foxy to the McCoys to stand at and Champlain Isle in 1991 and then they bought him. From their farm in Isle LaMott, Vermont, (about four miles from the Canadian border), the McCoys both shipped semen to the US and Canada and bred their own mares. Foxy often bred a dozen or more mares per year, up until the last five years when he semi-retired, only breeding mares on the farm and not shipping semen.

Randy McCoy remembers fondly, “He was a pet in his stall – anyone could go in with him. He loved babies – he was wonderful with babies – they would come to his stall and he would nuzzle them. He was a good father.”

Breeding two crossbreds leads to a greater range in potential sizing, but to the McCoys often took the gamble to breed the pony hunter they wanted. As one of the first heavily bred crossbred ponies, it took the McCoys some time to get sizing down for top of the line ponies.

Amy McCoy said, “He was all of 14.2 – every bit of it, right on the line and ½ TB. The initial thought was to breed him to 14 h mares and you would get good, safe larges. His babies, however, end up being pretty small and we missed the boat on a lot before we figured that out. You have to breed him to something big to get large ponies. The 14 h mares tended to make 13.3 or 14h babies – bad sized ponies. We just kept getting the wrong size until we figured that out. There are a lot of 14 h Rain Fox babies out there.”

With Champlain Isle so far North, The Devon Horse Show (PA) is not only the biggest, but also the closest hunter breeding show to the farm. “Rain Fox babies are gorgeous. I’m ambivalent about showing on the line – first you have to push them hard and that’s tough on a baby to do that. For the ones we show on the line, they go to Devon and that’s it- it is a one shot deal for us. They have to figure it all out and it’s a heck of a show to get your feet wet on,” explains Amy.

“Foxy was one of the last. He was very well bred. The last of a really elegant line and he was a wonderful guy. We were very privileged and honored to have him,” said Amy.

Stallions out of Rain Fox Mares:

A Mother & Daughter’s Joint Venture with a Registered Virginia Bred...