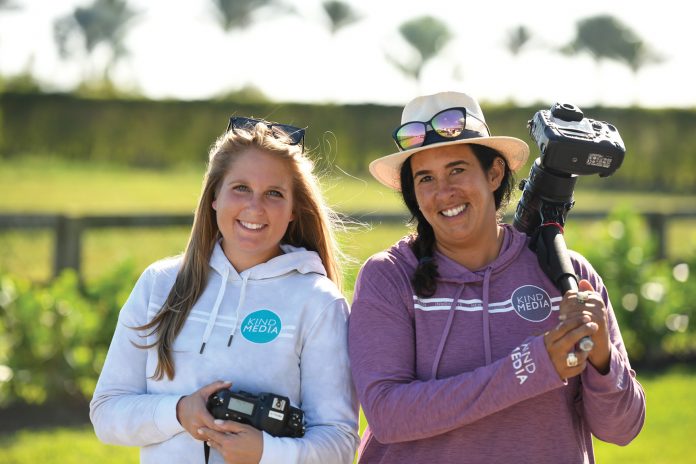 After working for The Book LLC, photographers Vicci Valenti and Annie Patterson took a hiatus. They returned two years later with their own media company, Kind Media LLC.

Sometimes even seasoned professionals must learn that the grass isn’t always greener on the other side of the fence. Vicci Valenti and Annie Patterson experienced that after leaving their positions at The Book LLC, where they shot photos at horse shows for James Parker, to pursue other employment outside the horse industry. Eventually, though, they realized they missed the horse show world.

In November 2019, the pair partnered up and formed Kind Media LLC, a photography and media company. With some of the oldest and most well-known events in the books for this year, Valenti and Patterson are looking forward to continuing the relationships they built at The Book and getting to do a job that “doesn’t actually feel like work.”

Valenti, who is from Valley Forge, Pennsylvania, grew up riding in Malvern, Pennsylvania, practically within throwing distance of the Devon Horse Show. Though she had to find rides to the barn and never owned her own horse, Valenti knew she eventually wanted to work in the horse industry.

Alongside riding, Valenti developed a passion for photography, which she inherited from her dad, Rocco. She pursued it as a hobby during her time at Delaware Valley University, where she studied equine business.

Around 2003, Valenti started working as a groom. She cared for one of photographer Anne Gittins’ horses during that time, and after Gittins saw her photos, she offered her a job with her own photography business. During Valenti’s free time, she freelanced as a photographer, often shooting for James Parker’s The Book LLC. Eventually she made the move to working for The Book full time.

“When I started with James, he was shooting film,” Valenti said. “I learned a lot from starting with him with film. It definitely taught me how to take photos with a purpose, way more than digital ever would teach someone.”

In 2008, The Book LLC went digital, but Valenti said the skills she learned while shooting on film helped her develop her eye for photos and made her shooting more productive and efficient. She went on to spend 15 years with The Book as a professional photographer.

While Valenti got into photography originally as a hobby, Patterson, of Charleston, South Carolina, had been pointed toward a career in it from the beginning. She grew up riding hunter jumpers and always had a camera in hand at shows. In fact, Patterson originally went to the Savannah College of Art and Design (SCAD) to pursue a photography degree, but later changed majors and moved to the University of South Carolina (USC).

“I was a little bit nervous about doing photography full time since it isn’t your typical ‘nine-to-five,’ and I think I got a little scared,” Patterson said. “I decided to switch my major to graphic design and finish out a degree there [at USC].”

Something kept calling Patterson to a career with horses, though. She continued to ride and shoot photos throughout college, and eventually some friends noticed her pictures were similar to Parker’s shots. They advised her to reach out to The Book’s website to see if they needed help at shows.

“I just got lucky somehow and the stars aligned, and they took me on,” Patterson said.

She worked at The Book for three years, gaining insight on how to run a business. Most importantly, Patterson said, she learned how to be organized at the big shows, planning and scheduling to make sure every rider was covered.

“I was in shock,” Patterson added with a laugh.

“I feel like I learned, especially at a young age, fresh out of college, the value of customer service, too,” Patterson said. “I think having that relationship with your clients — they’re not just your clients. Some of them are our friends. They’re more than just people we get to take pictures of. So I definitely think customer service, organization and time management were the key things I learned from there.”

A Business is Born

Eventually, Valenti and Patterson decided to take a hiatus from the horse show photography world. During that almost two-year period, Valenti bought a 1974 Volkswagen Kombi microbus and installed a photo booth in it. She drove the bus, named “Rio,” to parties and events, renting it out through her Fotovic and Company business, which she still operates today.

Patterson tried out corporate America for a bit, although it didn’t turn out to be as great as she thought. She pushed herself instead to expand her photography business and jumped into the wedding industry, becoming a second shooter for a couple Charleston-based photographers.

Ultimately, though, both Valenti and Patterson realized they missed the horse show world, and the pair teamed up to start a business together. Valenti said collaborating with Patterson was a no-brainer, as Patterson brought video, graphic design and editing to the team. For Patterson, partnering with Valenti meant getting to work with her mentor from The Book.

“I really trusted her and appreciated how well she was handling all of our business side of things and all of our contacts,” Patterson said. “She pushes me to stay on deadlines, things like that, that I know aren’t my strong suit. It’s important for people to know that it’s really awesome to go into it as a team rather than try to do it ourselves.”

Valenti and Patterson named their new company “Kind Media LLC” because of the many issues, including mental illness, people often face in the world.

“The ‘Kind’ part came up to just put that message out there that you don’t know what people are going through, so just be kind,” Valenti said. “We brought it up, and then we decided to see if we could come up with an acronym that worked for our business so we could use it in two fashions.”

After a few brainstorming sessions, “Keen, Innovative, New, Digital” filled out the Kind acronym, with “Media” tacked on at the end to acknowledge the other aspects their business offered outside of photography, like video and social media content.

Since Kind Media’s conception, Valenti and Patterson have landed the official photographer contracts for the Devon Horse Show and the Lake Placid Horse Show. While both horse shows were cancelled due to the COVID-19 pandemic, being selected for the jobs was still an honor.

“It’s a little full circle,” Valenti said. “I would groom there, and I even braided horses for the Devon Horse Show. And then I worked it for the past 15 years for The Book.”

“I’m in shock,” Patterson added with a laugh.  “I feel like we’re really lucky every day to get to do what we do period. That’s what I’m most excited about is getting back out there and getting to do that every single day, wherever it ends up leading us to.”

Get to know Annie Patterson

1. You currently own a retired hunter that you care for with your mom, correct?

Yes, his name is Gibbs. He’s a Hanoverian Warmblood, and I’ve owned him since he was 8, so about 10 years.  We showed in small A shows just in South Carolina.

2. What was the most important thing you learned  about photography at SCAD?

Most of our classes were based on projects you were given.  Those projects pushed you to be creative and to think outside  the box, which has helped me today. I can look at a horse and  see a picture that no one else sees, or see it differently than  others. That’s what I think makes photography and  videography so unique—people see the same thing so differently.

3. What’s a perk of having a partner for your business?

When you get to work as a team, there’s plenty of time for  like, if I’m having an off day, she can pick me up or vice versa.  It’s always nice to have somebody to be able to ask hey,  what do you think about this, or how should we word this?

4. Do the long days of shooting at horse shows ever get overwhelming?

There’s been days we’ve been at the show from 7 am  until  11 at night for a Saturday night class, and I mean, not once do  I really feel like it’s work. I think that’s really what I’m looking  forward to most is just cherishing that time to see how good  we have it in doing this. It just doesn’t really get better than  being able to go and be around horses and great people.

5. What kind of things do you like to do in Charleston?

My parents live on the water. I love boating and fishing, that kind of lifestyle.

Get to Know Vicci Valenti

1. What non-horsey type photography have you done?

I’ve always offered some family shoots, and I  would do a couple weddings a year for people  that I know, so mostly stuff to pass the time.

2. Who else did you groom for?

Rachel Kennedy was one of the first people I worked for on the A circuit. The other job that gave me the opportunity to go to Wellington for the first time as a groom was for Margaret Duprey with the Cherry Knoll Hunters and Jumpers at the time.

3. Did you find it difficult to change from film back to digital?

No, I found it great because then I could continue shooting every frame with a purpose. Every employee that I got to work with or teach at The Book, we would kind of teach them the way of pretending like you  were shooting with film.

It really feels good to drive around, just as a second antique car. You drive around and people are honking, waving and giving a peace sign, and it’s very happy for those seconds.

We are the official photographers at the USET Finals East as well. Obviously, it’s not as long as the others, but it’s special for the kids that  go there, so it’s special to us.

Read this article in the May/June full issue here.

Are You Watching This Season of The Bachelor?

35 Horse Halloween Costumes That Are Delightfully Over The Top