Home LGBTQ Ponies for Pride: Where the equine and LGBTQ+ communities meet 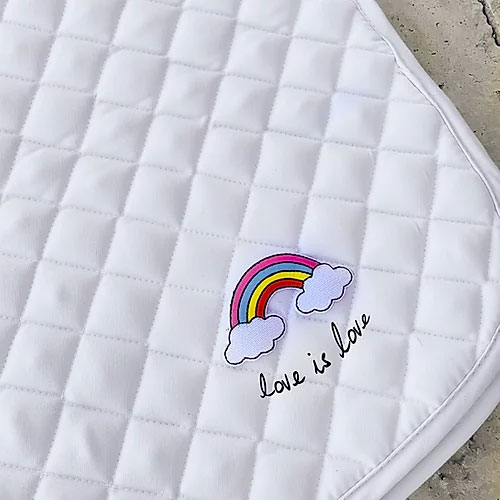 I have been overwhelmed recently by the frequency and severity of hate, prejudice, and exclusion, not only in the world, but particularly in this sport. If you’re “different,” you’re considered controversial, likely bullied, and often discriminated against. At all levels of the sport, bullying amongst teenagers is restricted to Snapchat, “Finstas”, and Twitter. There is a desperate need for reform, rewiring, and reconsidering who we are choosing to give voices to at this time. This extends to everything we are facing this month, including Pride and the Black Lives Matter protests around the world.

While this sport provides us with the opportunity to connect with animals, understand love and care in a new way and feel empowered by the ability to ride and soar, it can also be a hub for hate and discrimination—that needs to change.

When I came out, I was met with little to no hate. In the horse world, the most I have had to deal with was uncomfortable silence, someone quickly changing the subject, or being unfollowed on Instagram. I suspect this largely had to do with the fact that the first girl I dated publicly was a professional working for a notable rider and trainer. Plus, I was lucky to have a strong and accepting community at my barn, a place where I grew up and have always turned for love and support. My barn mates and their parents did all of the “right” things: they asked questions, they took time to digest and reframe their thinking, and they loved me regardless.

At the end of the day, love is love.

I started Ponies For Pride when the pride parades across the country were cancelled. As a member of the LGBTQ community, I wanted to use my privilege to serve others instead of hiding behind it and claiming neutrality. I believe my job is and has always been to take the good things that luckily fell into in my life and use them to enact change rather than just standing behind them, hiding under silence and inaction. This has always been true of me, even before I came out.

I chose to donate the proceeds from my fundraiser to the Ali Forney Center, an agency in New York dedicated to helping LGBTQ homeless youth. It is the largest agency of its kind, and has grown from a six-bed sanctuary in a church basement to assisting 1,400+ youth each year and providing 70,000+ meals annually. Founded by Carl Siciliano in honor of Ali Forney, a gender-nonconforming teen who fled their home at 13 and ultimately ended up homeless by the age of 15. Ali advocated for the safety of homeless LGBTQ youth and was tragically murdered in Harlem in 1997.

To raise funds for the Ali Forney Center, I am selling saddle pads, tees, and ¼ zips whose proceeds will be donated entirely to the AFC. You can find these on my website. The last date to place an order will be June 30th.

Pony up, spread love, and raise your voice. We’re all in this together.

Shelby is a Manhattan-based actor, photographer, and equestrian with a BFA in Drama from NYU’s Tisch School of the Arts. She rides at Lloyd Harbor Equestrian Center under the instruction of Lesley Woodworth and Catrine Golia, and at Coriander Farm under the instruction of Nashea Powell. She owes her life and her passion for horses to her mare, Chanel. Shelby is an LGBTQ activist and advocate for making the horse world more accessible, and plans to open a non-profit that provides equine therapy to adolescents with cognitive and psychotic disorders. (www.shelbyphillipsphotography.com)

It’s National Coming Out Day: What Does That Mean, and Is...