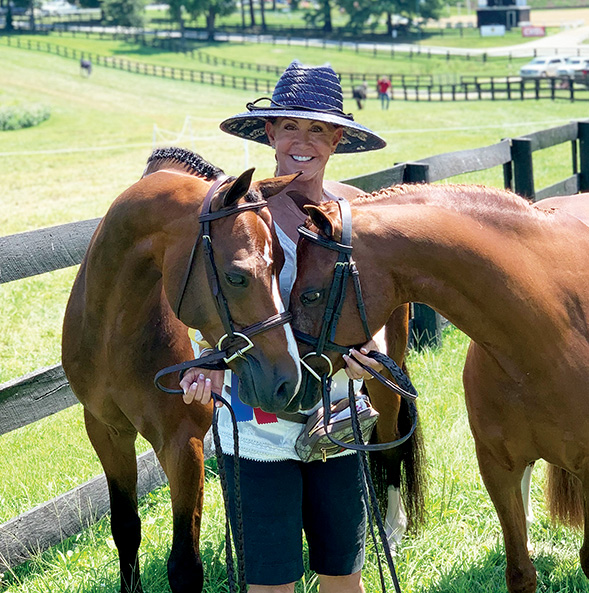 The first fake tail on a pony and the first $1 million-dollar hunter: What do these things have in common? Allyson Coluccio’s innovation was at their root.

“I always wanted everything to be as good as it could be, so I had to be creative,” said Coluccio, owner of Hidden Ridge International, Inc. “Today, there’s a product for everything, but when I started in this industry over 30 years ago, you had to be resourceful to succeed.”

In the 1980s, Allyson was one of the first importers of British Riding Ponies to the United States. “I was really impressed with how fancy the British ponies were,” said Allyson. “The British had already been perfecting their ponies for nearly a century.  At the same time, there was a calling for fancier ponies here as people wanted ponies that could win, especially in the under saddle and model classes.”

From there, Allyson continued looking for ways to innovate within the pony industry. “Most of the larger ponies were crossed with Arabian horses and didn’t have fantastic tails,” she said. “In the mid-1980s, some people who were showing gaited horses had started to use fake tails to improve their appearance. I thought: ‘Why don’t we try this with the ponies?’ and we did. I even added in tiny fishing weights to the bottom of the tails so the tails would lay flat.  It completely transformed the look of my pony’s hind end, and we won the model class at Devon that year.”

Allyson’s foresight and attention to detail were clear from the beginning. “After college, I remember finding a pony at a livestock auction for $400,” she said. “I got him back in shape, then resold him for $4,500. People didn’t believe me when I told them that it was the same pony. I realized I could see the potential in a horse or pony.”

“I look for the little details that make a horse or pony special, and I’ve learned how to spot a diamond in the rough, ” she added. “I also have a realistic understanding of what I can change and not change about an animal.”

Her talent for spotting a hidden gem came to light when she purchased Justified. “We came across him when we were on a buying trip for a client who wanted a jumper,” Allyson said. “He was a top show jumper at the time, and I thought he’d make a good hunter. He wasn’t the fanciest mover, but I recognized that his form and technique were spot on. He was super careful – almost too careful. We decided to import him as a hunter prospect.”

In fall of 1998, Justified received three perfect scores of 100 at the Middleburg Classic Horse Show— a defining moment in hunter competitions and in Coluccio’s career as a producer of top hunters.

“What separated Justified was that he was not only a top-quality horse in the show ring, but kind and willing to his riders,” she added. “He could go be a perfect champion and I felt comfortable putting my then 10-year-old son, Evan, on him. You would tack him up and he could march straight into the show ring to win. He was a horse of a lifetime.” In 1999, Allyson sold Justified for $1 million – the first hunter to be sold for that price in the world.

In addition to buying and selling horses, Allyson is also a well-known breeder. Most notably, she owned Blue Rain, a grey Welsh-Thoroughbred cross, who held the title of USEF Sire of the Year for the span of a decade from 2004 to 2014. Today, Allyson runs an entire breeding operation at her farm in Middleburg, VA. “Just recently, I’ve started breeding horses as well,” she said. “We have a great group of yearlings and two-year-olds. Of course, I am still breeding the ponies because that’s where my passion is. Right now, we have several stallions standing: EMC Entourage, Eclipse, CS Online, and a few in Europe.”

Allyson doesn’t like being in the spotlight or in the show ring, but thrives behind the scenes where she makes the magic happen with her ingenuity and imagination. Her son Evan has taken the reins of the riding part of her operation. “My son will ride anything and rides well,” Allyson said. “He’ll get on any horse to try it – it doesn’t matter how green the horse is –  which is a big asset to the business.”

Evan was groomed for the show ring from a young age. Over his junior career, he earned championships in the pony hunters through the junior jumpers at Devon, Pennsylvania National, and Washington International. He went on to win the Individual Gold Medal in 2006 FEI North American Young Riders’ Championship under chef d’equipe Sandra Ruiz.  After that, he had the opportunity to train with some of the biggest names in the sport, including McLain Ward, Katie Monahan-Prudent, and Missy Clark, to name a few. Evan also spent over a year training and showing in Europe

“My mom has a huge amount of experience and knowledge across various aspects of the sport,” Evan said. “When it comes to the training of the horses, that’s more my department. We know each other’s strengths and feed off that energy. My mom is definitely the glue that keeps it all together. She is very hands-on with the care of all of our horses and she keeps the farm running meticulously. She also has a huge network of connections around the world and has taught me a lot about the industry.”

“We want to create happy clients and find the right horses for people,” Evan added. “Not every horse is right for every person. I have some horses that are superstars in the right program and some that go well in any program. We are also looking forward to growing the training side of our business to take on more clients. It’s great to be able to keep working with the horses and see them develop in our program.”

At the heart of Allyson’s business remains her love of family, horses, and animals in general. She has used the stay-at-home period during the pandemic to spend time with her farm animals, including sheep, miniature cows, miniature horses, and more.

“I think it’s healthy for people to take a break from horse shows, spend time with their family, or even go for a trail ride,” she said. “In my free time, I’m involved with Prince Fluffy Kareem, a charity that supports working horses, donkeys, and camels.”

Allyson and her team at Hidden Ridge International use their passion to find the perfect horses for her clients’ needs and to grow champions. “There’s no feeling more rewarding than finding or developing a special horse and seeing it go to a great home,” Allyson added. “Some of the horses we develop are just truly special and I’m grateful to do what I do. It’s important to remember why you love what you do. At the end of the day, I love animals.”

Dominique Mungin: It’s All About the Moments