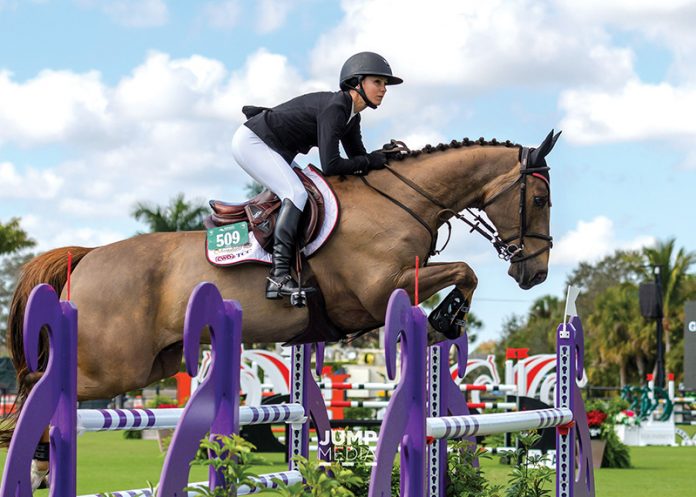 When it comes to breeding, Georgina Bloomberg has adhered firmly to the concept of quality over quantity. Her Gotham Enterprizes’ breeding endeavors remain small in numbers, but the rate of success has been sky-high.

“We’ve had a couple really good horses, and a couple that have gone on to other people,” said Bloomberg, whose international show jumping operation is based out of Wellington, FL, and North Salem, NY. “I don’t want to bring a ton more horses into the world. There are already enough horses that need homes and need help. I’m not going to breed just for volume or until I get a good one—I want to do it responsibly. Every horse I create, I’m aware it might not be a good horse, but it’s a horse I’m still responsible for.”

Bloomberg, a Pan American Games bronze medalist and two-time World Cup finalist, has only bred about 10 horses since 2006, but two have reached the international level. Nine-year-old American Warmblood Manhattan (Metropolitan—Lumina 2), has become a particular source of pride for his rider as of late, having stepped up to the five-star level in February. According to Bloomberg, he’s showing the potential for even more.

“He’s definitely a grand prix horse,” she said. “I’d love to see him do a Nations Cup, to jump a five-star grand prix and a championship. He has all the talent.”

Bloomberg’s foray into breeding began in 2005, when she had a small group of mares that were not in work, whether retired or rehabbing from injury. The result of those first matings was South Street (Languster—Mila), who turned out to be a sensational speed horse. In 2016, the bay won the 1.40m Speed Challenge in three consecutive outings at the Winter Equestrian Festival during Weeks 5, 7 and 8. South Street is now Bloomberg’s newest broodmare and is set to produce the first third-generation homebred of the operation. She was recently bred to Bloomberg’s Australian-bred stallion, Tulara Colmine.

“South Street wasn’t a grand prix horse, but she was a super horse. She won probably more than any other horse I’ve had,” Bloomberg said. “Most people who breed don’t get one horse of that quality. To have her and have success was wonderful.”

Manhattan, meanwhile, is a son of two former Bloomberg mounts, Metropolitan and Lumina 2. Metropolitan, a Selle Francais stallion, represented the U.S. in Nations Cup competition, while Lumina 2, a Westphalian mare, carried Bloomberg to success in the amateur-owner jumpers in the early 2000s.

“We thought they were a good match. Metropolitan was very scopey, calm, and easy-going,” Bloomberg said. “Luminia was more careful and hotter, but she didn’t have all the scope.”

Inheriting a bit of both parents, from his dam’s face to his sire’s build and affectionate personality, Manhattan was bred, born, and raised at Brendan Furlong’s nearby Pittstown, NJ, farm and veterinary practice. Furlong, who served as team veterinarian for the Land Rover U.S. Eventing Team for more than a decade, always took note of his quality. Manhattan thrived in Furlong’s care, where young horses grow up in a “natural setting” with ample turnout and socialization.

“He had a little independent streak from young age—that’s what makes him good,” said Furlong.

Sarah Crotty, a hospital technician at Furlong’s practice, was the first person on Manhattan’s back and taught the gelding his first lessons under saddle before he joined Bloomberg’s competition string at Gotham North in his 4-year-old year. There, Vasco Flores continued the chestnut’s education and gave him some of his first experiences in the show ring, taking note of the horse’s seemingly endless scope and agreeable demeanor.

“His working demeanor was super. He was a nice horse to work with. He always wanted to do his job,” recalled Flores, who, after working for Gotham Enterprizes for more than five years, now runs his own Highport Stables. “The horse has Olympic scope. He can jump anything.”

Manhattan progressed through the 5-year-old (1.10m-1.15m), 6-year-old (1.20m-1.25m), and 7-year-old (1.30m-1.35m) young jumper divisions with ease, and a review of his record reveals an impressive resume. During the 2017 Winter Equestrian Festival, Flores rode the gelding to five wins, three divisional championships, and the overall circuit champion title in the 6-year-olds. The pair also brought home blues in three consecutive years during Old Salem Farm’s spring series.

“I always thought I got lucky, because he was overly talented for his divisions” Flores said of Manhattan as a young horse. “If I gave him a little bit of room [at the jump], he would figure it out.”

Flores admits he was uncertain, however, whether Manhattan would continue his success as the jumps got bigger. Rideability did not always come easy with the gelding, but it would be essential at the top levels of the sport.

“The way I would describe it, it was raw power,” he said. “The horse had a lot of ability from day one. It was just harnessing everything the right way. I think the horse for sure landed in the right system between Georgina and [trainer] Jimmy [Doyle]. I think the horse is showing his potential now.”

Bloomberg was uncertain whether she was the right fit to ride Manhattan. It wasn’t until two years ago, when she was home in New York between shows in Europe, that she really connected with her horse. The timing was everything.

“I kept riding to stay fit, and I really liked him. He had a quirky, different style, but he gave me a good feeling,” she said. “I wanted to get to know him.”

Bloomberg is now successfully piloting her best homebred at the international level and, during the most recent winter season in Wellington, Manhattan let his rider know that he’s ready to take the next step in his career. On the derby field at the CaptiveOne Advisors 1.50m Classic CSI4* during WEF 4, Manhattan jumped a superb round in his debut at the height.

“It was his first time out there, and it was our first 1.50m together. There were a lot of firsts, and he went and basically trotted around the course,” Bloomberg said. “He handled it so well; we had just the last jump down. That was the moment I knew he was going to be a top-level horse.”

Manhattan capped his circuit by stepping up to the five-star level, never touching more than a single rail. In his first 1.55m event, the only mark against him and his rider were two time faults.

“From the outside, watching the horse go clear in the five-star at WEF was amazing,” Flores said. “Watching something that I got to ride and work with–and to see all the work that Georgina and Jimmy put in and the finishing touches come together—it’s honestly special.”

“It’s unbelievable,” Furlong said. “It’s lovely to see them go on, I couldn’t be happier for Georgina and her entire team. They’re raising awareness and the level of the American Warmblood, and it’s fantastic to see.”

Bloomberg has jumped around the world, and now aboard Manhattan, the journey has come full circle.

“Just the fact that I rode both the mother and the father—I’m incredibly proud to have a homebred that’s this quality,” she said. “If he was injured and retired today, I’d be proud of what he’s already done. I’ve bred two horses that I’ve genuinely loved riding and had good success on. To have this come out of it makes it really special.”