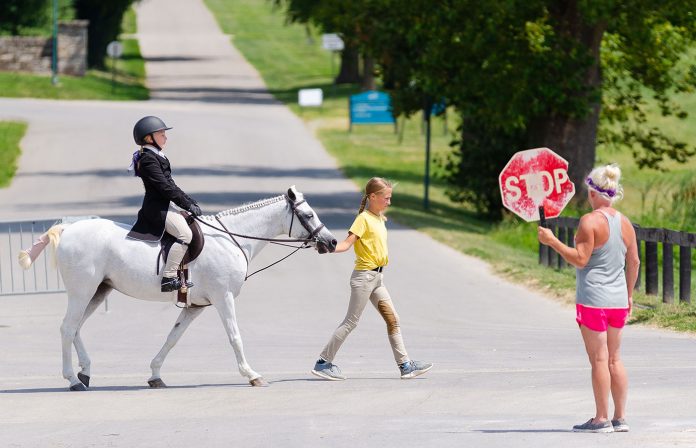 Due to Covid-19 cases in the Kentucky Horse Park, Pony Finals was cancelled yesterday two days before the event was due to start. Weeks ago, I wrote a response to the COTH interview which Billy Moroney and Robin Greenwood were interviewed about the merits of going forward vs cancellation. In that piece, I wrote:

“A number of Facebook commenters have suggested that anyone not directly concerned with Pony Finals (parent/trainer/owner/sponsor/management) should stay out of the discussion. I disagree, and think that those without ‘a dog in the fight’ are positioned to consider the question from an unbiased, clear headed viewpoint. USEF  has a vested interest in continuing forward despite the very valid concerns about risks, as do trainers who depend on the participation and competitive success of students to enhance their bottom line and their standing in the sport, and as do parents who aren’t unbiased about any issue affecting their children.  To this neutral bystander, proceeding with Pony Finals at this point in the pandemic is not rational.”

Before the last-minute news, USHJA had already recommended cancellation. But since Pony Finals are a USEF “property,” the decision rested with USEF.

In the last few months, horse shows have resumed with protocols in place (temperature checks, masking, social distancing). These protocols may decrease the likelihood, but are not a guarantee that someone who is presymptomatic or asymptomatic will not enter the show grounds and transmit the virus.

However, the protocols have not been rigorously followed everywhere—as evidenced from photographs on social media and accounts from stewards and others participants. I have not heard of even one single instance in which a management asked anyone to leave a showgrounds because of a refusal or a lack of diligence in following these precautions.

Since such action would serve as an useful example to others, it’s not something to keep quiet about, right? Clearly, enforcement has been a problem; in recent days we’ve received notice from USEF that protocols have been tightened even further in an effort to remove any grey areas that caused “confusion” (a charitable description) about requirements.

Meanwhile, Covid-19 trends in the southern states and specifically in Kentucky have grown dramatically upward. These trends were already emerging some weeks ago while a national debate about school safety rages. A gathering of children at just one camp in Georgia has resulted in hundreds of transmissions. Yet, shows have continued—even in the ‘hot zones.’

A serious defect to USEF’s Covid-19 Action Plan is a reliance on public health authorities to exercise guidance and/or place restrictions on activities that could lead to increased risk:

“These requirements and recommendations are intended to ensure USEF organizers and participants are following the most recent guidance from federal, state, and other public health officials. As that guidance continues to change, the content of this action plan will be modified to reflect those changes.

These requirements and recommendations for operating USEF-licensed competitions are in effect immediately and until further notice, however, they are subject to modification as the guidance from the government and public health officials’ changes.“

There is nothing in the protocols to address what should happen when guidance from public officials is absent  What if elected officials are slow to act, or if they choose to disregard warnings from health experts and fail to act at all? What if the guidelines are confusing?

On July 20th, the State of Kentucky issued an advisory (posted on USEF’s website)  that Kentucky residents should quarantine for 14 days after visiting Alabama, Arizona, Florida, Georgia, Idaho, Nevada, South Carolina, Texas, and Mississippi which, like the others, was approaching testing positivity rates of 15%. But what about non-residents? What about visitors to Kentucky? Were those traveling to Lexinton’s Kentucky Horse Park to show exempt from that advisory?

USEF exercised due diligence in posting the notice, but how many were asked on arrival at the Horse Park if they were Kentucky residents or had traveled to any of those states? Does anyone, including our Federation officers, think that participants in horse showing activities are so entirely insulated from the rest of society that the virus will respect the boundaries of our showgrounds just because we have protocols on USEF’s website and many shows are trying hard to follow them?

In light of that July 20th advisory, didn’t USEF consider the implications for Pony Finals at that point? If they had and had acted wisely in dispassionately weighing the options, looking at the trajectory of the increasing rates of CoVid infection, a disappointing yet justifiably rational and timely decision to cancel could have arrived at.

Had that serious action been taken earlier, it’s possible that the need for extra caution would have been made obvious to all participants at competitions everywhere. As it is, no one is happy. Instead, many are angry as further cancellations are contemplated.

New Show Grounds About to Break Ground in Ocala, FL