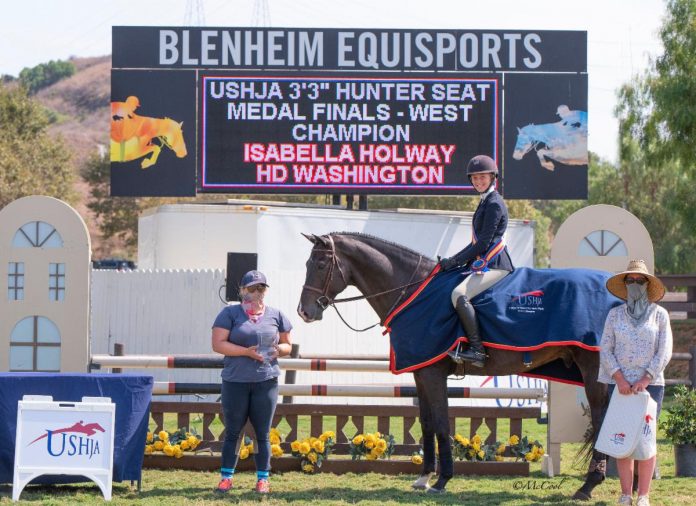 Lexington, Ky.—Aug. 17, 2020—The USHJA 3’3″ Hunter Seat Medal Final – West saw 45 horse-and-rider combinations contest the inaugural event on Sunday, August 16, but only one left the ring at the Blenheim Summer Classic with the tricolor. Isabella Holway, of Cardiff, California, and HD Washington were the top pair to claim the Final after three rounds of competition, while Vivienne Wood, of Pasadena, California, rode Way Out West to second and Julia Nickl, of Palos Verdes Estates, California, finished in third with Zurich.

After the first round of competition over a 13-effort course, the top 25 riders returned for a second round on Rancho Mission Viejo Riding Park’s Ortega Field with Nickl sittting in first on a score of 88 and Holway close behind in second with an 86. The two would swap spots on the leaderboard after Holway added a second round score of 84.5 for a total of 170.5, edging out Nickl’s 169.75 by less than a point. The top 6 were then called back for a third round, where their performance decided the final placings. Another flawless round aboard HD Horses, LLC’s HD Washington secured the win for Holway, who was more than pleased with her results.

“I was very happy with my rounds in the Medal! Round one presented many questions around the course that my horse and I were able to answer and execute very smoothly. Round two was a little bit more of a challenging course but was very fun and inviting. I think the work-off was probably our best round. My horse was super, the test was so well written and everything sort of just came together. Happy would be an understatement,” she said.

“[HD Washington] is unreal,” Holway said of her mount. “I can’t even put into words how much this horse has done for me and continues to do every day. He is my absolute one in a million horse. He’s big, goofy, and definitely thinks he’s the most handsome everywhere he goes, which I’d have to agree with. He always puts forth his best efforts and does it with a big smile on his face.”

After moving up from sixth in the first round and fourth in the second, Wood’s testing phase landed her and R & R Stables, LLC’s Way Out West in reserve. Nickl and her own Zurich rounded out the top three.

The USHJA 3’3” Hunter Seat Medal serves as a stepping stone for equitation riders, providing an opportunity to qualify and compete in a national equitation final at fence heights of 3’3”. The Medal is open to Junior Active Members of the USEF and USHJA, who have not competed in any of the following National Equitation Finals with fences at 3’6” within the same competition year, including: ASPCA Maclay Finals, USEF Hunter Seat Medal Finals, USEF Show Jumping Talent Search Finals (East or West), WIHS Equitation Classic Finals, Jump Canada Medal Finals or the North American Equitation Championship.

“My experience competing in the Final was surreal. I will always remember this day. From start to finish, this final not only allowed great competition but a place for growth and experience in the show ring. It was truly such an amazing final and class to partake in. Huge thanks to USHJA for adding this final this year; I’m so grateful,” said Holway.

The USHJA 3’3″ Hunter Seat Medal Finals – East have a new date and will now take place Saturday, September 19, at the New England Equitation Championships in West Springfield, Massachusetts. For 2020 only, both coasts’ Finals are open to any Junior who wished to participate.

About the U.S. Hunter Jumper Association

The United States Hunter Jumper Association, as the official hunter/jumper affiliate of the United States Equestrian Federation, is a competition-based sport organization that serves our members through educational programs, awards and recognition, communication and rules. We provide a wide array of programs for all hunter/jumper levels, and we are mindful of the well-being of our equine partners. Additionally, we are committed to preserving the history of our sport and through our Foundation we support charitable and benevolent services. Learn more at ushja.org.