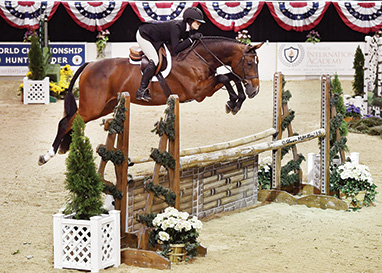 Precious few horses ever conquer the highest levels of international showjumping. Rarer still is the horse that achieves such heights, and then goes on to realize similar successes in the hunter ring. The late Baranus was one of those rare talents, earning the highest accolades in both disciplines as a competitive and well-loved partner for Olympians and amateurs alike.

With such prominent bloodlines (Balou du Rouet x Centauer Z), Bear’s athleticism was hardly surprising, but it was the successful application of his natural talents across multiple disciplines that made him so singularly unique.

Bear was foaled in 2003 by well-known German breeder Gestüt Lewitz, and later sold to Dutch show jumper Eric van der Vlueten. Together, Van der Vlueten and Bear achieved multiple notable finishes, culminating with a win at the 2012 3* Grand Prix in Humilkon, Switzerland. Unquestionably, the then nine-year-old Oldenburg possessed a high degree of talent, and it led him to a partnership with ten-time Canadian Olympian Ian Millar.

In a November 2012 press release from Millar Brooke Farm, Millar said Baranus was “a stunning horse, he has a lovely character, he’s got beautiful technique. I’m very excited about this partnership.”

Bear advanced steadily under Millar’s guidance to the highest levels of international show jumping, including victories at Spruce Meadows, GCT Miami, and the Winter Equestrian Festival. During their partnership, the duo represented Team Canada 16 times and appeared in 28 World Cup competitions.

Years later, it wasn’t just the gelding’s speed in the ring that made a lasting impression on Millar—it was also his unwavering character and willing partnership. When asked about his time with Bear, Millar called him “always a gentleman … in and out of the ring.”

Bear’s impeccable character and agreeable nature allowed him to quickly accomplish a rare and challenging transition in 2017. Bear and Millar competed as a team for the last time in the 4* Nations Cup in Ocala, Florida. Just weeks later, Bear and newfound partner Cassandra Kahle swept onto the hunter stage with an incredible third place finish in the $50,000 USHJA International Hunter Derby.

Following his spectacular performance in Ocala, Bear continued to dazzle in his hunter performances. His top placement in the International Hunter Derby during the 2017 Devon Horse Show quickly captured the attention of Lindsay Maxwell and her hunter trainer Archie Cox. The connection between Maxwell and Bear was instantaneous. Said Cox: “Bear and Lindsay had a level of horse and rider communication that was really magical.” Their trust in one another, he added, “contributed to their numerous successes in the ring.”

Bear again found himself with a new competitive partner eager to reach the highest levels of the discipline. Said Maxwell, “Bear was a singularly special horse both in and out of the arena. He was a very serious competitor who always gave his best effort in the competition arena, and was the kindest, most gentle soul in the barn.”

Bear’s “best effort” came to fruition in the form of numerous tri-colors and awards at Indoors and beyond with Maxwell in the irons. Together, Bear and Maxwell created just as many memories in the ring they did in the barn where Bear could be counted on to make silly faces in exchange for carrots or kisses.

It was with great sadness that on June 5, Baranus passed away due to complications stemming from a rare microbial infection.

Bear’s impressive list of championships and awards is a testament to his talent and competitive spirit at the highest levels of sport. But the legacy of the celebrated gelding goes beyond the ribbons and accolades. Said Maxwell, “My team and I have had the extraordinary honor of working with numerous champions, but Bear was a universal favorite. In terms of both talent and personality, it was impossible not to love Bear.”

Originally from the August 2020 issue.

Photo Gallery: Blame it on the Rain