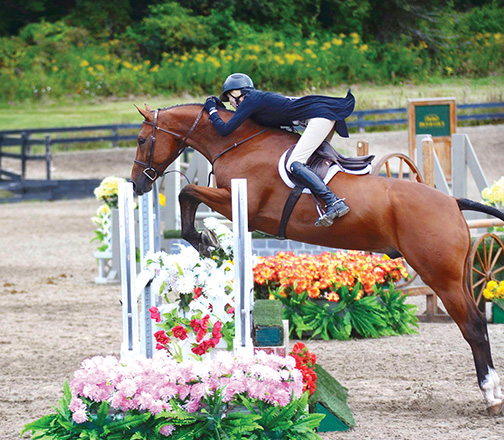 We all make mistakes. But horse people,  as a group, aren’t always the best at handling  them. So TPH reached out to some top riders  to share their own show ring bloopers to  prove, once and for all, that these  mistakes really do happen to the best of us!

“I flew Big Shot from California to Kentucky for the Green Incentive Finals and got eliminated for crossing the dotted line on the way to the first jump. All because I learned the course without looking at the chart where it was clearly marked.” ~ Jenny Karazissis

“We all look forward to achieving excellence  in the show ring. Being the winner is always fun, but it’s not always the case! That’s why our sport is so unique, challenging, and humbling. In 2011 I had a beautiful derby hunter who was in contention of winning the $10,000 USHJA International Hunter Derby. We scored a 90 in the first round and came back last for the handy. The setting was beautiful, the grass was green, the jumps were luscious, and my trot jump to finish the handy was tasty. Literally! Going to our last jump on course, eye on the prize, things went south, and as I leaned up the neck to release, my horse stopped and I went sailing. Up the neck and over the ears—right into the prettiest set of fake flowers you’d ever seen. In doing so, I accidentally pulled the bridle off with me. My horse reacted to that and sat backwards—this time sitting on his fake tail causing that to unravel and end up on the ground as well.

Here’s the fun part. When we get knocked down, we have to stand up and laugh, learn, and move on. That’s our sport! I stood up, I removed the rose petals from my front teeth, assisted the jump crew in putting the flowers back together. I then gathered my bridle and took a 5′ walk backwards to pick up the beautiful fake tail. So I picked it up and waved it proudly over my head. Horse and rider left the scene with nothing but a bruised ego, but the crowd went wild and enjoyed a good laugh. A memory I’ll never forget!” ~ Nick Haness

“I remember one year in January starting off in the Desert, catch riding a pregreen horse. I was short on time, got on the horse, picked up the left lead, cantered four jumps without walking. The horse landed both leads in the warm up and went to the show ring. The first jump was off the right and I went in and picked up the wrong lead. Then I tried again and again and again… I picked up the left lead six times. I tried from the walk, I tried from the trot, I made an extra circle. Finally realizing the horse had just been imported and probably needed a different leg aid, I picked up the correct lead and I could hear the judge clapping in the judge’s box. I have picked up the wrong lead before, but I’m pretty sure six times is a record!” ~ Hope Glynn

“I remember not too long ago, being at Devon, showing in the Green Conformation. I was having a beautiful trip and the last line was like nine or ten strides going towards the out gate and I just sort of lost track of where I was and mucked out the last jump! Boy, did I feel dumb! As I walked out of the ring, Don Stewart screams, ‘Hide the razor blades!’ We all laughed. What can you do? Just one of those things that happen!” ~ Leslie Steele

Originally from the August 2020 issue.