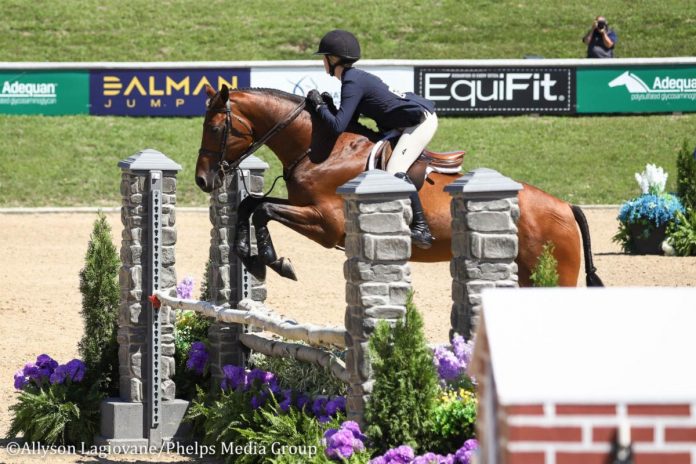 Traverse City, Mich.—Aug. 26, 2020—Capping off a successful three days of junior competition in Traverse City, Michigan, the USHJA Gladstone Cup Equitation Classic – East, presented by Intermont Equestrian at Emory & Henry College, showcased the talents of 67 equestrian contenders throughout the day Tuesday, August 25. Grace Debney dominated the day thanks to three rounds of consistent riding, both on Temple Equestrian LLC’s Quimby, her usual ride, as well as a swapped horse for the final work-off. Leading the way from start to finish, Debney demonstrated her equitation expertise in the Classic round, Handy phase and the final test to emerge victorious, an added bonus following her championship honors earlier in the week during the 2020 Adequan/USEF Junior Hunter National Championship – East Coast.

Named in honor of the United States Equestrian Team headquarters at Hamilton Farm in Gladstone, New Jersey, the USHJA Gladstone Cup Equitation Classic is a three-round class that combines the precision of equitation and the handiness of hunters over a course set at the 3’6” height. Hosted in the picturesque Turtle Creek Casino & Hotel International Ring, the class featured expert tracks from course designer Andy Christiansen of Royal Palm Beach, Florida, which served to highlight the skills of the exhibitors ahead of judges Mark Jungherr of Williston, Florida., and Sissy Wickes of Unionville, Pennsylvania.

Wickes commended riders on a job well done, especially noting the skill and finesse of the top four finishers. She highlighted what set Debney apart from the rest, saying, “The top four were all consistent, beautiful riders. Grace [Debney’s] first round impressed us because she picked up a pace and never changed it. It was absolutely beautiful and it was soft and efficient. I think that is the point of equitation—to look good but to also be functional; to not work against your horse and work with your horse.”

Following the Classic Round, Debney had jumped to the early lead as the front-runner on Quimby with a score of 90, the only exhibitor to hit the 90-point benchmark during the first portion of riding. Collectively, participants rose to the occasion with 23 individuals earning a first-round score of 80 or higher, and the cut-off score for the group of top 20 returners sat at 81.50 points, keeping the scores tight headed into the Handy Phase.

Trained by Kate Conover, Stacey Weiss and Samantha Schaefer of Shadow Ridge Farm and assisted by Haleigh Landrigan, Debney has been building her relationship with Quimby for two years. It was clear that their strong partnership paid off as she set herself on top early on in the class. Conover commented on Debney’s impressive start, stating, “Her first round was breathtaking. We are really proud of her. She kept her composure, and we kept saying, ‘It’s not the battle, it’s the war. Be consistent and keep at it.’ We walked the course and we did what worked for [Quimby]. It was nice with all of the options on course, and we can’t say enough about this venue. It was a beautiful course and it was set up really nicely for our horse to show off how hunter-y he is.”

The handy pattern challenged participants to successfully trot a fence, hand gallop and complete a bounce, in addition to a number of changes of direction and rollbacks. Not willing to be outdone by any of their peers, Debney and Quimby once again led the way, maneuvering the handy track to the tune of 89.50 points to settle on a top score of 179.50 after the second round.

For the final test, the judges called back the top-scoring four riders. For the work-off, riders were not allowed any assistance from their trainers, putting emphasis on their horsemanship, and also swapped horses. First to go, Ellie Ferrigno rode Austin Krawitt’s mount, Vendredi Riverland, and Krawitt followed suit of Ferrigno’s horse, Astro De Ravel. Second-to-last to tackle the pattern, Dominic Gibbs piloted Quimby, and Debney closed out the day aboard Gibbs’ Clover. Ultimately, Debney continued to impress and was named the 2020 champion.

On her historic win, Debney said, “It means a lot because we’ve had [Quimby] since he was seven years old and he is my first equitation horse. I was his first rider in the equation classes, so to win at such a nice venue is really big for me and my horse. It’s really special.”

For their outstanding efforts, the champion and reserve champion were recognized with prizes from the USHJA Gladstone Cup Equitation Classic’s generous sponsors. The day’s big winner, Debney was honored with a Charles Owen helmet, a pair of Parlanti tall boots, an Essex Classics riding shirt, a gift basket from Straight Arrow, a certificate for FITS Breeches, a cooler and a keeper trophy. Krawitt, as the runner-up, earned an Essex Classics riding shirt and a certificate for FITS Breeches. All top 10 riders sported colorful sashes and saddle pads from USHJA. The top 5 riders also received a certificate for an Essex Classics riding shirt. Susan Mancheski’s HH Moonshine, ridden by Tessa Downey, was distinguished with the Best Equitation Horse Award, winning a CWD Halter and a trophy.