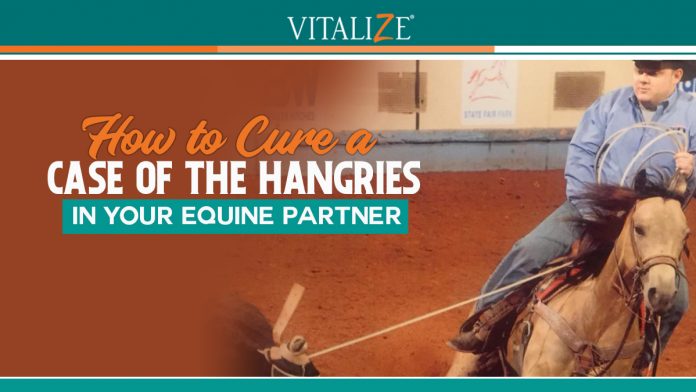 (SAINT JOSEPH, Mo., Sept. 2, 2020) Hangry. It’s a real emotion. You’re so hungry, that you’re angry. You don’t want to be around other people, or your mood is so foul that you shouldn’t be around others. But nothing sounds good. A hamburger doesn’t sound good, a piece of fruit doesn’t sound good. A donut or your favorite ice cream won’t likely ease the hunger you’re experiencing.

Imagine being a hangry horse. The horse is only able to eat what is put in front of it; and for years that same grain mixture hasn’t been cutting it. Yet, as the equine half of a roping duo, you’re expected to perform at your highest. You’ve done well for a younger horse. Putting your partner in the top 10 in the world the past two years. Just imagine what would happen if this horse were full and happy.

Meet Flash. He’s the 6-year-old raised and owned by Brett Schmidt, Mebane, North Carolina. Schmidt owns and rode both the mother and the father to Flash, making him an extra special show horse. However, another thing that sets this horse apart is that he is the hardest keeping horse that Schmidt has ever had to deal with.

“He’s always been a little horse. He’s never eaten well, even when he was nursing his mother. He’s a late bloomer,” Schmidt said of the equine partner he’s been roping off of the past few years.

Schmidt is no amateur when it comes to horsemanship and horse care. He’s been team roping and competing in AQHA recognized shows for 18 years. He’s yet to claim a world title, but he’s been a finalist 18 times. At Level 3, he’s been in the top 10 nine times, and at Level 2, he’s claimed Reserve and Third in the World. So, while Flash has proven himself a great and diverse roping horse – he placed in the top 10 in heading as a 4-year-old and in the top 10 in heeling as a 5-year-old – Schmidt has remained perplexed about his appetite loss and inability to gain weight.

“I bet he’s put on 100 pounds in the last eight months. For a horse that gets ridden 4 to 5 days a week, that is just crazy. We are not feeding him any differently than we were three years ago, two years ago, or one year ago,” Schmidt said.

Flash took a turn for the better when Schmidt’s friend and BioZyme® Inc., Area Sales Manager Justin O’Flaherty introduced him to the Vitalize® equine supplements. He said after Flash started the Vitalize®Equine Digest More® Plus, he gained 20 pounds in a month. He also started him on Vitalize Alimend®, and he continued to gain weight, fill out, get more shine to his coat and became overall calmer.

“His temperament has calmed down some; he was never high strung just always seemed fresh or irritable, 90% of that has gone away. He’s more pleasurable to be around. I guess before he was just hangry,” Schmidt laughs.

Vitalize Equine Digest More Plus is a pelleted top-dress supplement that contains Amaferm® for increased digestibility, MOS for sequestering pathogens, and biotin and zinc for coat and hoof health. It provides an easy, convenient way to enhance digestive health for horses of all ages and performance statuses when adequate protein, vitamins and minerals are already received through fortified feed and premium forage. Amaferm is a precision prebiotic designed to enhance digestibility by amplifying nutrient supply for maximum performance. It is research-proven to significantly increase intake, digestion and absorption improving gut health.

Vitalize Alimend is a natural product that contains a unique blend of: MHB3® Hyaluronan, H. erinaceous (Lion’s mane) extract, and AO-Biotics® that supports gastric health and GI tissue in horses. It provides 24/7 stomach comfort and relieves equine gastric issues commonly associated with training, traveling and performance without altering stomach pH or hindering digestion. AO-Biotics is a precision prebiotic designed to boost animal resilience to challenges and is research-proven to improve gut integrity and immune response.

Flash now cleans up his grain immediately instead of leaving any trace behind between meals. He nibbles hay all day, but he’s definitely eating better, keeping his weight up and looking and acting better, all thanks to the Vitalize supplements.

Although COVID-19 hasn’t allowed for much competition, he and Flash are still practicing at home on a regular basis, so they are ready for when the shows start up again. With Vitalize on their team, and a horse that is no longer hangry, Schmidt has big goals for himself and his equine partner.

To learn more about the Vitalize products and the good gut feeling your horses can gain, visit www.vitalizeeq.com.

Jorst and Tarjan Showcase Rising Stars in AGDF 7 to Claim...