Home Blogs Pony Island Always at the Barn: Why Pony Rider Helena Timpany Has a ‘Bright,... 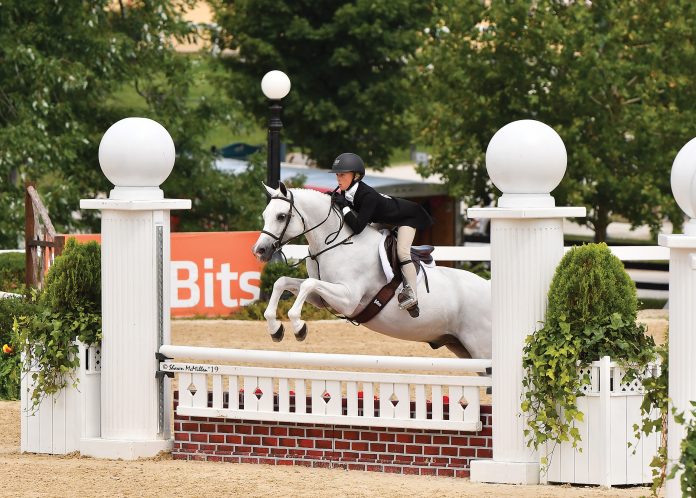 Helena Timpany was only two years old when she was first hoisted up on a pony at a birthday party. “It was the best birthday party the kids ever had,” her mother Diane recalled. The weather was gorgeous and the kids were enjoying their pony rides and the other barn animals.

She had no idea what that pony ride would inspire.

The camp held a small schooling show, in which Helena had a choice of riding a pony or a large horse named Whisper. Despite her small stature, she chose the horse.

“I had a suspicion then,” said Diane, “that she kind of liked a challenge.”

Helena rode at Ridge with Leslie Miller for two years—most of it on a Welsh pony named Twinkie. She joined Pony Club as well, learning essential horsemanship skills such as grooming and tack care. In an early lesson on a longe line, the little girl asked her trainer if she could jump like the other riders. “Yes you can,” said Leslie. “But it may take a while.”

Abbi challenged the 8-year-old to jump an oxer built of Christmas trees. Helena accepted the challenge and Abbi knew she had found a future star. “She was very little, but she was a go-getter,” said Abbi. “If you challenged her, she was going to try!”

Helena began training with Abbi, and got the ride on a bay Welsh mare named Bitty Bunny, “Clarey”. The pony had been shown by Abbi’s daughter Ellie Ferrigno in the green mediums the previous year at Pony Finals. Ellie went on to win the coveted USET Show Jumping Talent Search Finals East title, among other top junior honors, in 2019.

Competing with Clarey in the short stirrup division, Helena moved up to rated, and then A-rated, shows. She won her first blue in a walk-trot class, followed by a win in the over fences.”

“I thought it was really, really cool to win first place,” said Helena. “Then they announced that I got champion.” Abbi came over to let her know how proud she was of her.

“Oh, what? You don’t need me now?” Abbi teased. And with that, Helena was officially bitten by the horse show bug.

When Helena and Clarey scored several blues and a championship at the Vermont Summer Festival, Abbi knew it was time to move them out of short stirrup and up to children’s hunter pony.

Still in Vermont, Helena switched to the new division, and immediately pinned. And after all the success with Clarey, her family purchased the pony.

Despite all their success together, Helena didn’t find Clarey easy to deal with. But learning to work with the temperamental mare helped hone the skills she would need with future mounts.

While any mom would be proud of her daughter’s success, Diane is particularly impressed by Helena’s sportsmanship. “She shies away from negative talk, so her friends feel that they can trust her,” said Diane. “She has leadership qualities and fortitude. She treats the ponies with kindness and love. Friendship and harmony are as important to her as performance. I’ve instilled in her that success is not a reward if you don’t have fans and friends.”

In 2017, Helena was riding and showing Clovermeade Peekaboo Street, “Peek,” in the children’s pony hunters, moving up to show in the regular pony hunters only a week before Pony Finals.

So it was a big surprise to both Helena and Diane when Abbi invited Helena to come to Kentucky.

“When I first got to the Kentucky Horse Park, I was amazed at how large it was. Later that week I was able to ride in the cross-country field with Ellie which was so cool since I had never been on a grass field before,” said Helena.

Diane was unable to travel to Pony Finals due to work, but she caught her daughter’s classes on the live stream. After successful model and under saddle classes, Peek and Helena ran into some technical difficulties in the over fences. But Helena “handled it like a trooper,” said Abbi.

Helena’s teammates had spectacular jumping rounds, which landed them in the top ten in the massive medium pony division. She clapped and cheered, excited for her friends. Her teammates took notice, and Kyla Sullivan nominated Helena for the Betsy Fishback Sportsmanship Award.

After Pony Finals, Helena began showing Clovermeade Cranbunny, “Fancy,” in the regular smalls. With Fancy, she scored numerous blues and reserve championships, and they finished the year third in Zone 1 and fourth at Eastern States for HOTY.

With Clovermeade Bunny Side Up, “Tiger,” a medium, Helena qualified for Devon in 2019. The pair were in the ribbons there, and continued a tremendous winning streak, including numerous championships and ribbons at Indoors, a sixth overall in the USEF Pony Medal Final out of approximately 200 entries, and champion in Zone 1 and  third in the country.

Helena also began riding several of Abbi’s green ponies—another great learning opportunity for her. She and small green Clovermeade Bunny Talks, “Dimitri,” have taken many tricolors in the regulars and Dimitri stands #1 for CHJA and third for Zone 1, while Helena was tied for third in the USEF Pony Medal rankings with Dimitri.

Riding some of Abbi’s large ponies gave Helena the experience she needed to move up to her first horse, Last Call Z, “Lady,” who was purchased this spring. Of moving up to horses, said Helena, “It’s a big adjustment and I’m still working on it.”

The hard work is paying off: Lady has already pinned at Kentucky, Fairfield, and Westbrook (where Helena was also champion in the Children’s Equitation division).

“The growth and development that I have seen with Helena is beyond anything I could have imagined,” said Diane, adding that the family has Abbi to thank for that. “Abbi has an uncanny way of serving her students exactly what they need to get to the next level, and she is committed to making all of her ponies and riders champions. Abbi feels her riders’ joy and pain.”

Sharing the world of ponies has been a transformative experience for both mother and daughter. It has been, said Diane, “magical.”

Abbi has praise for Diane as well. Diane has given her free rein to shape Helena’s riding career, allowing her to advance rapidly and successfully. Of Helena, says Abbi, “She’s up for anything! I can throw her up on any pony, which is huge. She’s a hard worker, dedicated, always at the barn. She’s great on a green pony because she’s not worried if they have a moment. She loves a challenge. She has a bright, bright future.”

Originally from the October 2020 issue.

It Happens! Jumper Riders Look Back to Embarrassing Show Moments