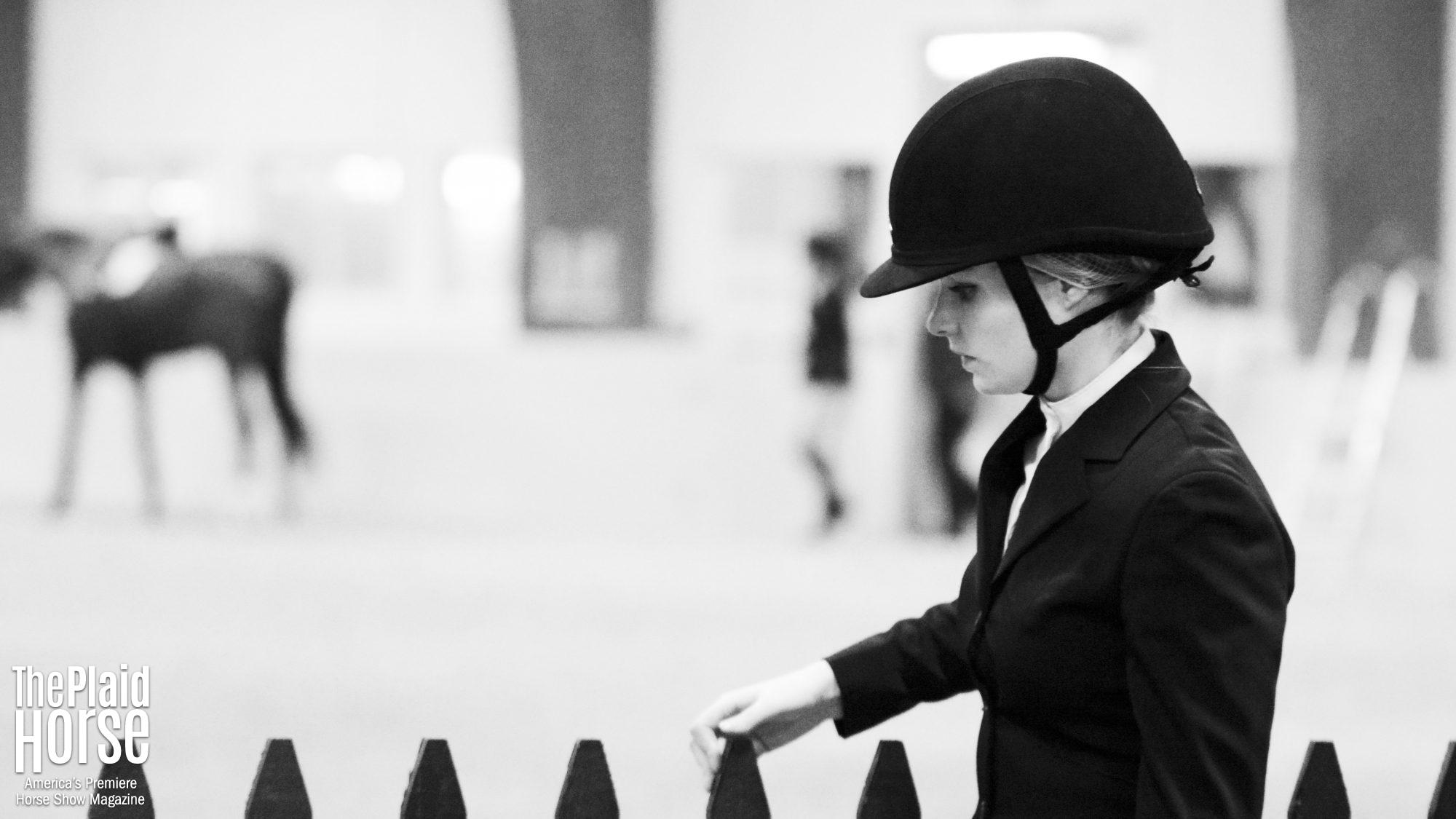 College student Cady found herself depressed and isolated in a new environment when she stumbled across the equestrian team—not realizing it was huntseat rather than her usual saddleseat. After her “sea of green ribbons” in her early horse shows, things started to click as the barn started to feel like home.

By the end of Junior year, things were looking up a bit. I went to three of the four shows, not doing much better, but finally after three years I earned enough points to boost up to a division. Surprisingly, I managed to still get my usual green ribbons despite harder competition. I also became Treasurer of the club.

This meant that all new recruits knew me. I was one of the first people they met, and in their eyes I was “important,” even though I never won classes. They looked up to me the same way I had to the older girls when I started. It wasn’t something I expected. I figured as soon as they showed with me and saw they were all better than me that respect would disappear, but it didn’t. They appreciated the work they knew I put into the team to keep it running.

By senior year, I was fully invested. I was for-sure going to every show, and qualifying for the post-season Regionals was in my crosshairs. First semester I was Vice President, serving under a grad student. After he graduated in the fall, I took his place, officially as President. A girl who took three years to advance one class and had yet to go to the post-season was President. It was surreal.

The start of the spring semester was life changing. After two failed treatments for my Crohn’s, my doctors continued my medication, but also gave me steroids. I was nervous to try them as my mom had severe side effects when she had taken steroids before, but I ended up loving them.

They helped my symptoms to the point of being a normal person. Even more importantly, my depression lifted away, and for the first time in my life I had energy. It was still below average, but I didn’t feel like passing out when I went to the barn. I could canter without being exhausted!

Getting enough points to move up another division was going much faster than the first time around. The last, regular show weekend started early on a Friday. There was a small show on Friday, a show on Saturday, and then post-season Regionals were on Sunday. I was one of the few from NIU who got to show on Friday as I was so close to pointing up. By Saturday’s show I only needed one point. Which was perfect for me as there were six in my class… and I managed to get my trademark green ribbon and single point.

It didn’t give me much courage going into Regionals, but at least I finally freakin’ made it! There were six in my class, and one was an NIU girl. She usually did really good. Like getting-first-out-of-ten-when-her-foot-was-injured good. So I was hopefully at least she would make it on to Zones.

“I always feel so bad for people who get third. They do so good but they don’t get to move on. That’s got to suck,” she said to me as we were standing at the in-gate getting ready.

Regionals were being held at Missouri State University. It had one of the best arenas in our region, and for whatever reason I always seemed to ride better on their horses than at other colleges. Plus, I actually had energy from the steroids. So this was the place where I stood the best chance of shining.

Being one of the smaller riders, most of the time I managed to pull one of their ponies – Sinnin’. She was a feisty mare who took two people to tighten her girth, and was one of the few horses with a red ribbon in her tail. Over the years I had come to appreciate her. She was speedy, and didn’t take a lot of effort to get going. If anything, my issue was with slowing her down, but in the show ring that was the better problem.

To my horror, she wasn’t used at all on the third day as she had been tired from the previous shows. Instead, I pulled a white pony that took a lot of energy just to get to trot, let alone not break at the canter.

My ride went… okay. There were no mistakes, but it definitely wasn’t my best performance either. To no surprise, I got my green ribbon, but this time it was a few inches longer. My teammate got third.

“I feel like I jinxed myself, bringing up how third sucks. Because it does,” she shrugged before the picture taking ceremony.

After handing my pony back I started crying immediately.

“That was a great ride. You should be so proud of yourself!” Coach said, assuming I was disappointed with the results. Which I always was, but actually I was crying because now it was over. That was my last show with the team. Probably my last show ever. And now it was just… done.

The assistant coach chimed in, “That was the best I’ve seen that horse go all weekend. There’s not much more you can do.”

With showing done in March, the next two months stressing over finding a job and graduating went in a flash. Of course, my job as President wasn’t done yet as we still had lessons until the end of the year. Plus, we were already planning for the shows next year.

Reflecting back on my college years, I was in such a different mental state before graduating from starting as a freshman, and a lot of that had to do with the equestrian team.

Overall, I never became the best rider (or even an average rider). And I never really “won it” for the team. Though I did receive the Sportsmanship award for my region after graduating. But I might never have seen the chalk reminders on the sidewalk for the next meeting. I might never have ridden a horse again. And I might never have made those friends I still have today.

Cady Wakitsch graduated with a BA in English from Northern Illinois University in 2016. She currently works as a marketer for a software company.

College Equestrian Teams: What’s The Best Fit For You? NCAA vs....