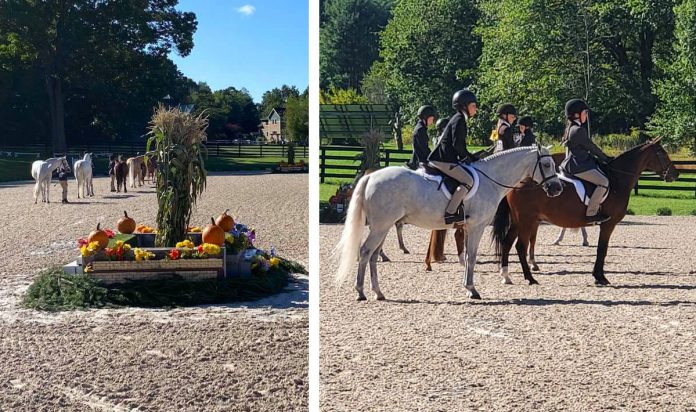 Pony Finals, like so many eagerly awaited events, was cancelled this year due to the pandemic. Kids around the country who look forward to it all year were crushed when they learned it would not take place.

So Epic Farm, owned by Jill Kulmann and her daughter Jaime Richards stepped up to the plate to provide an alternate event. It was amazing what they created in the short time they had to put it together!

Kids and ponies competed, learned, and had fun, while enjoying the stunning facility. The “Pony Feedback Frenzy” ran from September 11-13, beginning with an Auction Preview, Model Clinic with Audrey Petschek, and barbecue on Friday.

The model clinic received raves from participants, who were educated in all aspects of showing in model classes. The model is not to be taken likely, as points earned in the class count towards the championship, and could make a vital difference.

Learning about the model class, Audrey told the attendees, “improves your  understanding of correct structure and can only enhance your overall knowledge of horses.” Model classes, she states, “are part correct conformation, part proper presentation and showmanship.” She also advises competitors to “always enter the arena as if you are the winner.”

In order to show best in the model, ponies “should be a little chubby. Good horsemanship starts at home with a feeding program, good foot trimming and shoeing, and loads of grooming.

“Pony and tack should be super clean, the pony should be beautifully braided, have a properly fitted  bridle with everything in keepers, have hoof oil on the hooves and baby oil around the eyes and on the nose.

“In the ring you should pose your pony, and look to catch the judge’s eye. Keep your walk sharp and animated, stay at least two horse lengths from competitors (model classes are automatically socially distanced), and have a treat to get your pony’s attention. Get your pony posed when the judge is starting the one before you. Be sure to practice jogging so you can jog off promptly.

“Smile, breathe, and have fun.”

And don’t ever let go of the reins! That is cause for elimination.

Cassie Sanzone, who rides at Another Farm in Woodbury, had never modeled a pony. She loved the modeling clinic and said “I didn’t know how to model before, so I learned a lot!”

Her sister Hannah was also new to modeling ponies. She loved “learning what the judges were looking for, and how to do it.” She particularly enjoyed jogging her pony to show off his movement. Hannah felt the whole three day event was “a great learning experience. The judge’s feedback was the most helpful for me. I learned a lot!”

Friday’s events were followed by a barbecue in the evening.

The next day everyone got a chance to practice the skills they had learned, as the model class began the day. It was followed by an under saddle class and then Medal classes ranging from 18″ to 3’3″, keeping judges Timmy Kees and Frank Madden busy until 8 p.m. that night!

After each round, the competitors joined the judges for feedback (trainers were invited as well.) Then the riders would re-jump the particular fences the judges thought needed improvement, fixing their mistakes as detailed by the judges.

After the day’s events everyone relaxed and enjoyed a pizza party.

Sunday began with an over fences round for ponies, followed by brunch.  Horses (a late addition to the extravaganza) were next, and all competed in a hunter classic.

Meanwhile, the pony auction was in full swing, with bids coming in from around the country. The auction was an important part of the event, helping fill in the gap left from the sales that normally take place at Pony Finals. Jamie wanted to ensure that pony owners did not get left out of this important annual sale.

An under saddle class followed next in the ring, combining horses and ponies. The class was then split, with the top placers in each section returning to vie for the lead. The ponies outshone the horses, taking many of the top spots.

Ribbons were handed out through 10th place in each class, and then the overall winners were pinned as well. All of them went home with great prizes!

There was abundant praise for the event. Christina Schauder of Country Lane Farm summed it up perfectly.

“My students had an amazing experience attending the Epic show. I brought pony riders as well as adult and junior riders that competed on horses. They especially loved the judges’ feedback. It was positive and very helpful to all of them.

“The courses were challenging yet inviting. The facilities at Epic Farm were top notch. from the footing, to the schooling rings in the two indoors, to the beautiful stables our horses were spoiled with. Jamie and her mom Jill also spoiled the competitors and trainers with a barbecue, live music, a raffle (we won a bridle!) and even a modeling clinic. Thank you for a great three days!”