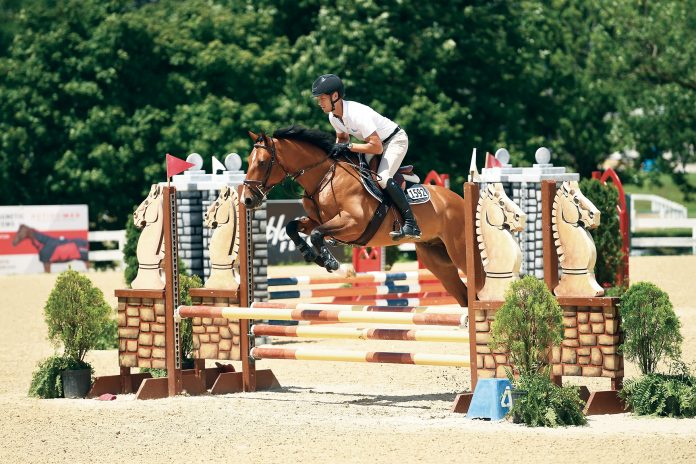 Every time Ali Boone sits astride one of her Sterling Equestrian homebreds, her mind goes to one place—her mother.

“She was the brains behind this. In a way, we’re just trying to carry it on to the point that she would be proud,” Ali said of her mom, Tricia Boone.

Tricia tragically passed away in March, but there is no doubting the legacy that the vivacious, passionate equestrian left on both her family and the industry at large. Tricia visibly lives on through Ali and her sister Catie, the Sterling Equestrian brand, and the championship horses—including the likes of Kent Farrington’s Up Chiqui and Boyd Martin’s Blackfoot Mystery—she has owned for some of the nation’s  best riders.

Tricia’s program has produced 24 foals, the oldest of which have begun their careers in the training jumper divisions, guided by Ali and Catie. Among them, the 5-year-old Prophet 55 is showing promise for big things. Affectionately known as “Luke,” he honors Tricia with the 55 that proceeds his show name. The matriarch of the Sterling Equestrian breeding program was born in 1955.

“I’m always thinking of her every time I’m on the young ones,” Ali said. “I know she’s with me, watching me, and happy to see the horses doing well.”

Luke, along with 6-year-old half-sibling On Fire 55 (“Peanut”), is out of the Matterhorn mare, Utterhorn, who was purchased with Olympic aspirations for Kent Farrington nearly a decade ago. Colic surgery cut those dreams short, but Utterhorn would contribute to another purpose: jump-starting the Sterling Equestrian breeding program alongside two other foundation mares, Naleida, who carried Catie to individual gold at the 2006 North American Junior and Young Rider Championships, and Wait and See, a top junior and amateur-owner mount for Ali.

“Mom was an equine veterinarian who worked mainly with broodmares when she was younger,” Ali said. “She had a big background working mainly with Thoroughbreds. As [Catie and I] started riding ourselves, as our dad hates to put it, we started “collecting horses”—older mares that were not at an age to be sold. We were fortunate to have a large farm, and my mom had the background, so we started breeding. My mom was super passionate about it.”

Utterhorn was characterized by her scope, so when it came time to select a stallion for her, Tricia sought out a speed horse. She settled on Cyklon, the former Shane Sweetnam mount who recorded 29 career FEI wins, mostly in speed classes. Cyklon was a winner at Dublin, Aachen, Gothenburg, and Wellington—just to name a few—and now stands at stud at Spy Coast Farm.

“[My mom] wanted to add the sharpness and quickness that we see in the sport now,” Ali said.  “She was trying to get something a little faster.”

Luke was born and raised at Sterling Equestrian, as are all of the family’s homebreds. They only leave the property for about a month in their 3-year-old year to be broke by Elijah McQuerry at his Versailles, KY, farm. Debbi White, who helped Tricia with the breeding program in its earliest stages, continues its management, as well as the family’s rehabilitation program. In addition to the 24 horses foaled on the farm, there are six more mares in foal in 2020.

“Luke was the easiest [young] horse I’ve ever had to ride,” White said. “The horses always come back exactly as [McQuerry] says they are, and he said that I’d love him. When I started him, he was so light off my leg.”

After McQuerry does the initial breaking, White rides the young horses briefly before they are turned out again for a few months; then they are put into regular work. When it was time for Luke to begin a more consistent program, White was impressed by his mental strength and composure.

“His brain was just so good,” she said. “The first day I sat on him [again], I cantered across the middle to do a simple change. I thought, ‘Let’s see what happens,’ and I [stepped out for] a lead change. He was light as can be, and he swapped leads in both directions.”

That poise continued when Luke competed at his first horse show at the World Equestrian Center in Wilmington, OH, in the baby green hunters.

“He went around, and the jumps weren’t a problem,” White said. “He has a class look, a class rhythm, and class balance. He’s not hard to get to the ring. He has all that going for him. He’s bred to be a jumper, but  he also has potential as a hunter.”

White works with the young horses until they are ready for Ali and Catie to ride; the two sisters split the horses within their own programs. Luke is currently in Ali’s program with Santiago “Santi” Neuberger; he made his jumper ring debut with Neuberger at  Kentucky Summer Horse Show in July.

“Santi and I have had him in our care for about five months. He’s always been so nice to work with,” Ali said. “He’s one we got really lucky with: He has natural balance and a great, natural rhythm. We’re mainly working on perfecting the form of his jump. He has every other quality; he was very rideable at a young age. He’s a smaller horse with long legs and an awesome stride. He has everything there. We’re very excited about him.”

“There are not many bad things you can say about Luke. Has the scope, and he’s careful enough,” Neuberger said. “He really doesn’t want to touch the fences. He wants to do it; he wants to jump, and he’s not spooky. Once he’s comfortable in the ring in the smaller classes, we’ll move him up.”

For now, Neuberger will be Luke’s primary rider. The Argentina native, also Ali’s boyfriend, rode to multiple national championships with 4-, 5-, 6- and 7-year-olds in his home country. In the past year and a half, the professional has begun laying the foundation for show ring success with the Boones’ young horses before passing them on to Ali and Catie, both of whom ride as amateurs.

“It’s nice to try to give my part and contribute to developing some very good jumpers,” Neuberger said. “I know how much Tricia loved these horses. It’s nice to be able to help Ali and her family with them.”

The Sterling Equestrian breeding program roster is approaching 30 horses—from foals to 6-year-olds—and the commitment the Boone family has made to producing American-bred show jumpers is significant.

That undertaking comes with great investment, both financial and otherwise. While Tricia is no longer a guiding force on the ground, both Ali and Catie remain committed to her vision.

“We’ve discussed it a lot recently,” Ali said. “To do this, it’s definitely something you have to be passionate about; it’s a lot of work and time. Going forward, we do want to keep breeding. I don’t think we ever saw the entire operation that we have now, coming, but we do love it.”

The Boone sisters hope to produce successful mounts for themselves, along with horses to sell—and perhaps, if they’re lucky, a horse capable of succeeding at the top levels of the sport. But ultimately, the Sterling Equestrian operation is all about happy horses with purpose and good homes, as well as honoring meaningful roots.

“When my mom brought in young horses, it was always the icing on the cake,” Ali said. “It made our program and our family as horse people come together as a whole.”

“[My mom] bred them with dreams of them being top horses, but she also just loved horses,” Ali added. “She’d be happy with them getting a great home, whether they ended up jumping or being a trail horse. She did this because she loved it.”

Originally from the October 2020 issue.