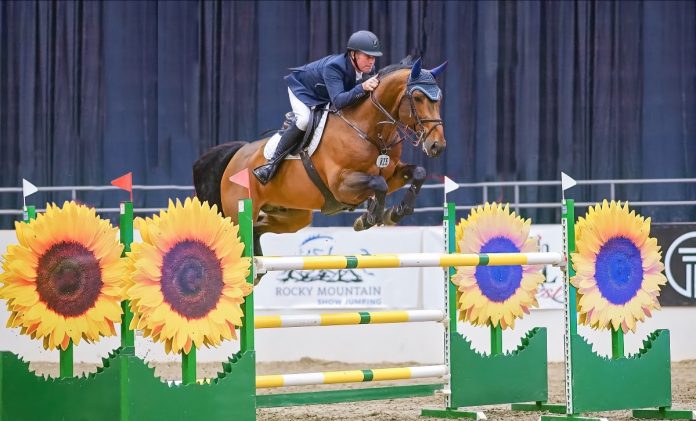 The cream rose to the top at the final Royal West Mini Series which played host to the 2020 Royal West Canadian Championship presented by Yann Candele this past Friday and Saturday night in downtown Calgary at Stampede Park.

Gold, Silver and Bronze medals were presented to the horse/rider combinations who earned the best result over the two nights of Grand Prix Competition beginning with the $2,500 Klondike Victory Farm Grand Prix on Friday, and the $20,000 Cavalier Horse Transport Spirit of the West Cup on Saturday evening. When the dust settled, it was Jim Ifko and Rachel Cornacchia both of Eventyre Farms who took home the Gold and Silver medals respectively, and young Shaelynn Enders with two nights of great riding won the Bronze Medal. In all, the three earned the medals topping a field of 26 riders who vied for the Royal West Canadian Championship title.

Although spectators were not allowed to attend the event live, there was a buzz in the air with almost all of the competitors and families competing at Royal West staying to watch both nights, as well as a huge Livestream audience that had over 8,000 views and 112,600 minutes or 1,876 hours of viewership, numbers that any showjumping event in North America would certainly enjoy.

“It was sure great that John and his team at Rocky Mountain Show Jumping was able to pull these tournaments off down at the Stampede, ” said Jim Ifko when asked about his feelings on the event. “Although the show wasn’t International per se, it sure had an International flavor and feeling, and their team should be very happy” added Jim.

Jim earned the Gold Medal aboard his great mount Un Diamant Des Forets by winning both the Friday and Saturday competitions. Jim’s horse is owned by Rachel Cornacchia of Eventyre Farms who earned herself the Silver Medal in the Championship aboard her horse Valkyrie De Talma.

When asked about her coach taking home the Gold and leaving her with the Silver, she replied, “Hey Jim is a fantastic rider and we work great together, and although I had to finish second, I was extremely happy because we at Eventyre all work together as a team.” “It was also great that medals were handed out to the owners and the grooms of the horses. I think this was a great touch, as it is not just the rider who gets the win. The win happens because of the team and its great that John recognizes that fact,” added Rachel.

Ellicia Edgar and her Husband Bryce Lueders were the sponsors of the $20,000 Spirit of the West Cup with their newly formed company Cavalier Horse Transport. Ellicia herself rode two horses in the Championship and had the heartbreaking last fence down on her first mount and unfortunately went off course on her second mount, the 7 year old Igor K. When asked about her night she laughed, “Well, it’s a bummer to jump around clear and have the last fence down, and as far as going off course, all I can do is laugh. I was so glad the judges didn’t whistle me out right away as Igor was jumping awesome, however, when I did jump the last fence, I thought it seemed that I finished rather quickly. I guess that happens when you skip five jumps.” On her sponsorship of the event, she added, “We just started our Cavalier Horse Transport company and my husband Bryce just returned from our first official trip to California, so it was nice having him here to support me and the rest of the Alberta riders who participated at Royal West. These riders will be the market that we cater to, so supporting this event was a no brainer to us and we were pleased to help out.”

Royal West has concluded, and the RMSJ management team now shifts their focus to the two Santa Claus Classic events at the end of November and the first week of December, also being held at Stampede Park.