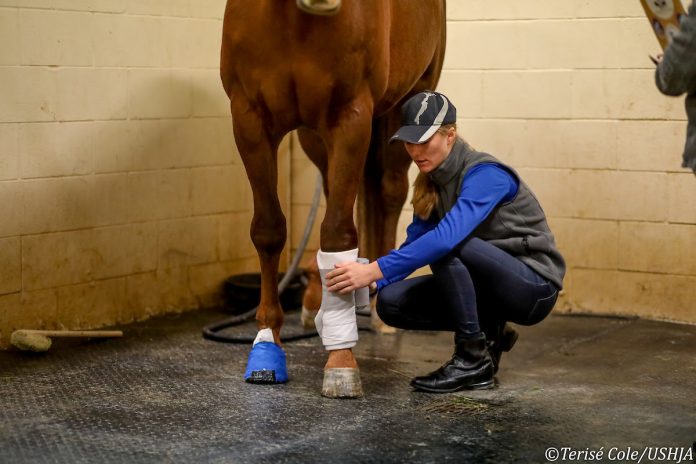 Both Nationals were held virtually this year due to the COVID-19 pandemic, but the events still featured multiple phases of competition.

“The committee did an amazing job of making the virtual [event] work,” Munson said. “It turned out to be absolutely amazing. At first we weren’t sure how it would work and if it would be the same experience, but they really pulled out all the stops.”

The competition began with an online written exam. The top scorers in the written exam then moved on to participate in the interview portion, which consisted of two essay questions that participants answered in a video interview with the HQC Committee. The top four finalists moved on to the practicum, where they were asked to demonstrate a series of horsemanship techniques also via video interview.

Munson, 16, of Rogers, Arkansas, was second place at HQC Nationals in 2019 and has competed in the Horsemanship Quiz Challenge for several years. In addition, she has grown up participating in all aspects of horsemanship at her family’s farm.

“I’m quite a bit of a bookworm to begin with; learning and testing is really enjoyable to me,” Munson said. “When the USHJA came out with HQC, I jumped at the chance to do that, and it has been amazing. Going to HQC [Nationals] last year specifically has been one of my favorite educational experiences yet.”

Munson took an early lead at this year’s HQC Nationals, earning the top score in the written exam. She earned fourth place in the interview phase before moving on to the practicum, where she took first place. Together, her efforts earned her the top overall spot.

“I was expecting more of a second place finish, so when I got the email it was really surprising and a really cool moment,” Munson said about learning that she won. “My best friend was next to me, and it was just a really happy moment.”

“I am super excited about the internship opportunity,” Munson said. “Being able to see that program—whether it’s breeding or rehab—they’re top level. Just getting a window into that I’m excited to have happen. Being able to spend a couple weeks there is going to be great.”

Spy Coast Farm also provided an educational webinar to all HQC Nationals participants during the competition.

McKenna Goodson, 16, of Amherst, Massachusetts, was second place overall after earning first place in the interview and second place in the practicum. She received gift certificates from Parlanti and FITS and a belt from Boy-O-Boy Bridleworks.

This was the inaugural year for Adult HQC Nationals, and winner Holly Adams, of Huddleston, Virginia, said the event was right up her alley because she loves learning and loves asking questions.

“I like to learn about things and horses are a huge part of my life,” Adams said. “I just feel like it’s responsible to know as much as I can and be able to do as much as I can for my horse.”

Adams started riding when she was 10 years old after begging her parents to let her go to camp. She has participated in multiple disciplines including dressage, hunters and jumpers, and she currently rides sidesaddle. Horsemanship has always been at the forefront of her involvement in the sport. Growing up, she participated in the Pony Club Knowdown and is used to doing things from start to finish at the barn.

HQC wasn’t around when Adams was a junior, so when she heard about Adult HQC she was excited to participate. During Nationals, Adams placed second in the written exam, first in the interview phase and third in the practicum. Even with her high placings, she was still shocked to receive the news that she had won.

“I was sitting outside with my husband and the dogs and just kind of fell over backward in the grass,” Adams said. “It was unbelievable.”

Adams received gift certificates from sponsors Charles Owen, Parlanti and FITS, as well as a gift package from Straight Arrow.

Angela Yates, of Indianapolis, Indiana, earned second place overall. She was second place in the interview and first place in the practicum, receiving gift certificates from Parlanti and FITS and a belt from Boy-O-Boy Bridleworks.

Peggy Kline, of Torrance, California, was third place overall. She was fourth place in the interview and second place in the practicum. She received a FITS gift certificate and a belt from Boy-O-Boy Bridleworks.