Home Blogs Why Dogs and Horses Make The Best Of Friends 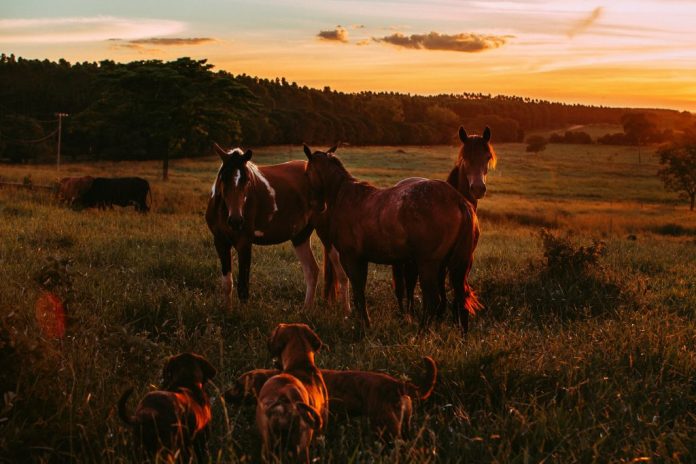 So, you’ve decided to relax from your long day at work. You’ve thought of grabbing your phone to see what’s trending in social media. As you’ve scrolled through your feed on Twitter, you’ve come across a compilation video about an incredible attachment between equine and canine buddy stories. You saw a clip showing a dog mischievously roving around a horse like it’s asking it to reach him. The horse stuck out its neck as far as it could to say hello and they started to sniff each other’s noses. Another one displays a dog and a horse snuggling up in a hay-filled stable snoozing the day away. One portrays a story of a rescued pooch who changed the life of a bossy miniature horse. By the time that dog hopped onto the miniature horse’s back from the step tool, it became obsessed with riding on his buddy’s back– and from that day on, they became inseparable.

You smiled at all these videos because you find it amusing and ridiculously adorable. It almost feels like it’s a crime to scroll past and not click on more videos about it. But then, you’ve wondered. Is it possible for a dog and a horse to get along? Can these two species really become best friends? Well, read on to find out.

What Makes Dogs and Horses The Best of Friends?

It’s easy for humans to display their affection for their pet– a treat, a belly rub, a snuggle time and saying ‘I love you’. In the same manner, anyone who spends time with their pet will notice how animals express their care to us.

Dogs, for example, use nose-nudging as a sign of seeking attention, licking as their form of kissing, jumping as an enthusiastic act, leaning to show they trust you, as well as rolling to suggest belly rubs. Horses, on the other hand, can also manifest the same way. In fact, research says that if a horse willingly approaches you, without being asked, it reveals that they like your presence. In addition, your trusty steed respects you if it constantly pays attention to your every move and follows you around. Horses are known to be flight animals. So if you sense that they’re relaxed around you, they are initiating that they’re safe with you.

We learn a lot from our animal friends and we couldn’t deny that they also love other species regardless of their differences. The manner of how dogs express their affection to humans also applies to their interaction with their friend horse. You’ll notice the excitement from them as the pooch eagerly reaches his horse companion at its stall–who in return leans down to greet hello. More often, both would snuffle each other’s noses, lick, lean– or sometimes, dogs would place its two front paws to the horse’s head as if it’s hugging him to convey that he’s happy to see him.

Both Appreciate A Good Snack

History and Biology will help us understand why animals are so obsessed with food. Animals used to live in the wild where their primary instinct is to survive. Although this also goes with primitive humans, our ancestors tend to rationalize their drive to eat. Other creatures don’t have that concept, and whenever there’s food available or smells like it’s a meal, they’ll eat it. Therefore, the appetite to eat, whether they’re hungry or not, is encoded in their DNA and due to evolution.

As a dog owner, you have probably encountered your dog gazing at you with those ‘puppy dog eyes’ staring straight to the food you’re eating at that moment. You might have also observed how easy it is for them to sneak their way into the kitchen table to see if there’s a potential snack. By the same token, you should be alert to deal with a horse. Some of them eat fast and are quick enough to steal your food too! Though this behavior is unfavorable, it is most definitely instinctual and natural.

Dogs are carnivorous. But, even so it’s still important to provide them with a proper diet. No matter how hungry they are. A well-balanced nourishment should be provided for your dog especially when it’s susceptible to diseases just like Cavalier King Charles Spaniel’s breed. If you can’t find the right brand, you can navigate to this website for reference. Likewise, though horses are considered to be omnivorous, it’s also best to know the correct fruits and vegetables for them, what food to avoid, and how to feed it.

All animals play and exhibit ways to have fun such as rolling, running, and wrestling. But studies explain that this may also seem like their method of communication and how they strengthen their bonds with each other. Dogs normally invite another dog to play, when its front legs are bowed and its tail is high and wagging. Surprisingly, a recent study by a group of researchers in Italy reveals that this play initiation behavior is also identical between a dog and a horse social play.

Elisabetta Palagi, PhD, and her team from the University of Pisa studied 20 Youtube videos of dogs and horses playing. They analyzed each clip and looked for certain patterns during its play. After careful examination, Dr Palagi realized that they seem to be ‘in sync’ as they appear to ‘understand each other’ and they adapt matching behaviors such as ‘self-handicapping’ which involves an act of adjusting their strengths or modifying their behavior as they play, as well as ‘rapid facial mimicry’ where both mimicked each other’s facial expression.

However, even if we find this one undoubtedly appealing, it’s important to be aware of the potential risks of bringing your dog to the stables, especially the cases of horse hoof trimmings ingestion. Though evolution has made all dogs and horses get along, this is not always the case. Dogs are considered predators by nature, and horses are their prey. If both instincts take over due to negative interaction, such as the horse’s fight-or-flight instinct, it can choose to kick or strike the dog. Similarly, dogs can become aggressive and chase the horse. Therefore, it’s necessary to make sure both are comfortable with each other.

Fundamentally, both equine and canine species are companion-driven animals. While dogs are pack species and horses are herd animals, it’s natural that both will work well together. Both have a long history of service to mankind during World War I. They are known to be curious, intelligent, and athletic animals. But perhaps the most important thing about them is that they’ve both evolved to develop close relationships with humans. Thus, it is our job to ensure their safe and positive environment in the pasture and train them properly.