Home Blogs Barn Lounge Found on Facebook: How a horse bought sight unseen turned out to... 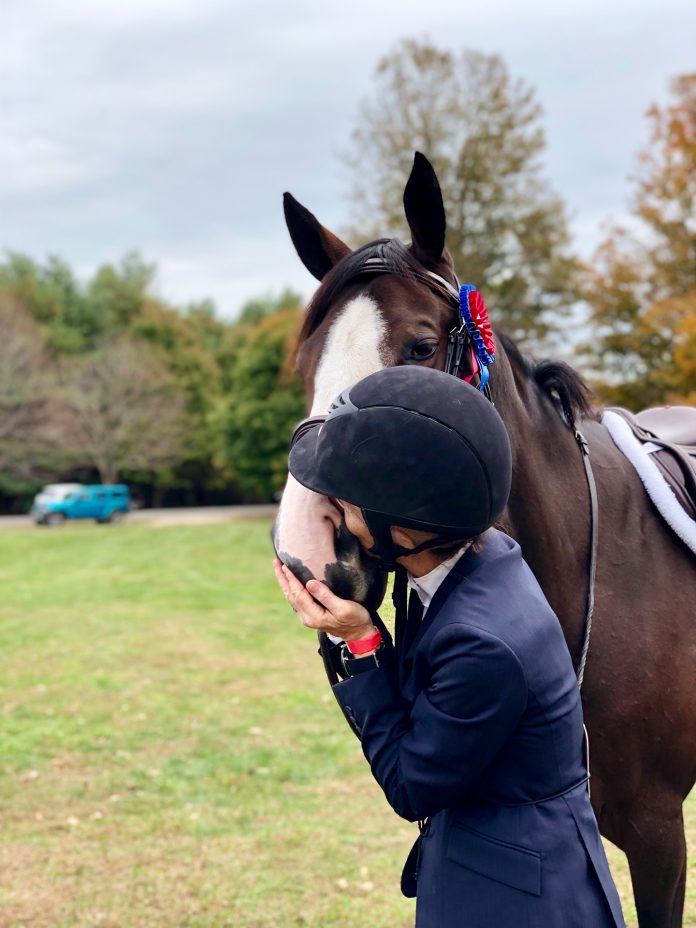 There are so many ways to go wrong when it comes to buying a horse. The worst way of all, most professionals agree, is sight unseen.  But that was before the Covid-19 pandemic upended the world and all bets were off. At least that’s what my trainer Nancy Hartman and I decided this past summer when I bought a horse on the basis of videos alone.

Before I met Nancy I’d been looking for a horse for a while with no success. Each time I found a promising mount, he or she was inevitably “out on trial” or already sold.  Apparently I was searching for the same horse as every other would-be horse owner: a 2’6” hunter packer with some sort of show record. Even after I increased my budget and lowered my standards, it was never quite enough to achieve success.

When I described my predicament to Nancy, she said, “I’ll find you a horse.” Nancy is the general manager and trainer at Mosefund Farm in Branchville, New Jersey and, as everyone who rides there can attest, Nancy is a woman of her word—and of action as well. Nancy trained at Crabet Park Equestrian Centre in England and has been coaching hunt seat riders all over the Northeast for almost fifty years. She not only knows her stuff but lots of people as well.

Nancy put the word out among her contacts and began checking out any horse that seemed promising on various Facebook sales groups. She turned up two horses fairly quickly in the nearby Hudson Valley of New York. One horse, an experienced show hunter, had been for sale for a while and his price had come down within range of my budget. The other horse, a 12-year-old Thoroughbred gelding described as kind and experienced, had just been posted on “Hunters, Jumpers & Equitation Unicorns,” one of Nancy’s favorite Facebook groups. Nancy was one of sixty people who had contacted the seller within hours of the post, she told Nancy, who arranged for us to try both horses right away.

The experienced show horse (who we tried at HITS Saugerties) turned out to be rather high strung. After he spooked at a culvert next to the warm up ring, we realized he wasn’t a good fit for a nervous middle-aged rider like me. The kind and experienced Thoroughbred, however, was exactly that. In fact, Nancy and I liked him so much we arranged the pre-purchase exam the following day. Alas, the exam revealed advanced kissing spine so we continued the search. This time, Nancy began searching a bit further afield—well beyond driving range of New Jersey, in fact.

While I had complete faith in Nancy’s judgment, when she sent me a video of a horse located in British Columbia, Canada, I did have some misgivings about the breadth of her search. Americans were not allowed to travel to Canada, after all, on account of the virus. Perhaps that’s why, when Nancy turned up a mare in Florida, it somehow seemed like a plausible plan- never mind this was in early August, when anyone who traveled to or from Florida faced a mandatory two-week quarantine at home.

Nancy had a long conversation with the mare’s owner, Allison Henson, with whom she bonded over their shared Vermont roots. Nancy also liked the look of the mare, a six-year-old bay Appendix named Alice that Allison had purchased eight months earlier with the intention of re-training then reselling her. Allison had taken Alice to a few local shows and even a cross-country event and put Alice up for sale in April. Although Alice attracted a number of would-be buyers, when Florida shut down, the buyers disappeared.

By the time Nancy found Alice on Facebook in August her price had dropped not once, but twice. I took this as a bad sign. Why had she been discounted? I asked Nancy, who replied, “I really love the way this mare goes.” In the meantime, Nancy had found a trainer in Ocala who was willing to try Alice for us and make an assessment. (Nancy couldn’t travel to Florida because she couldn’t quarantine for two weeks; she had a barn to run and riders to train.) But the trainer, Candace, would have to do it soon because the now-discounted Alice had attracted a “ton” of interested buyers, according to Allison.

Candace rode Alice the next day and sent Nancy a video along with a rave review. Alice was “wonderful” and “super sweet and forgiving of mistakes.” In short, if I wanted to buy Alice I’d have to act fast. Did Nancy think I should buy her? She did. We arranged a pre-purchase exam  (Alice passed) and I wired Allison a check.

Then I promptly had a large panic attack. What if Alice and didn’t like one another? What if she was nothing like she looked in the video? And were her ears really as big as they looked in the videos? I pelted Allison with all of those questions and more. Allison answered every phone call and text, day and night. I’m quite sure I couldn’t have successfully purchased an untried horse had the seller not been as kind and patient (and yes, honest) as her.

When Alice walked off the trailer at Mosefund Farm in late August, she looked around calmly and lowered her nose to graze. That pretty much sums up Alice. In fact, most of the time, Alice seems half-asleep unless she’s looking for a treat. Or until she enters the ring.  What do you call a horse that only wakes up when you ride her? I asked Allison a few weeks after Alice arrived. “Perfect,” she replied. (Allison and I text often; I send her news of Alice and videos and photographs.)

That’s how Alice became “Perfect Alice,” the show name that I chose for her when, seven weeks after her arrival, Nancy and I decided to enter her in a local show. Our team of three—Nancy, me, and Becca Bender, an incredibly talented 24-year-old who was helping to train Alice to jump because Alice is still green and I’m still nervous—decided to enter Alice in Beginner Hunter over fences and several Hunter Pleasure classes on the flat. Becca would ride Alice over the fences and I would ride her on the flat.

We didn’t even have the time to warm up for our classes, so Alice basically walked off of the trailer and into the ring—no lunging, no practice ride. She won ribbons in every class and a championship in the pleasure division. “It’s like she has been showing all her life,” said Nancy, who later admitted she did think it was crazy to buy horse sight unseen. (Fortunately, she admitted this two months after the fact.) As for Alice, when my friends at Mosefund Farm heard of her triumph at the show, three of them said they wanted an Alice clone for themselves. I’d call that a happy ending (or beginning) for a horse purchased sight unseen from a Facebook ad.

Originally from the December 2020 issue.

“I Euthanized Your Horse Today” – Skip’s Story of Rescue and...