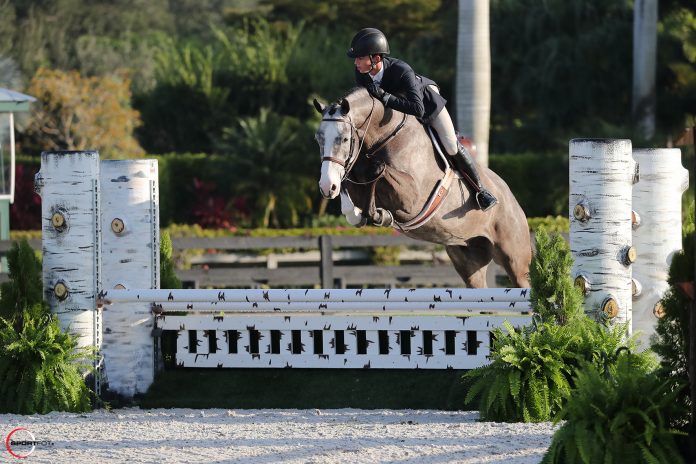 The Young Hunter 2’9” Five and Under division came to an end on Friday morning in the Rost Arena. Cooper Dean rode Larry Glefke’s Figure of Speech to four blue ribbons and one third place to claim the tricolor ribbon.

This championship was especially exciting for Dean, of Fayette, AL, and Figure of Speech because it was the gelding’s first horse show. The pair was also reserve champion in the Pre-Green Hunters 3 and 4 Year Old earlier in the week.

“He has a bright future!” Dean said of the four-year-old Holsteiner by Casall. “He is a great jumper and a beautiful steel grey [color] with a good body type. He’s a good young horse that any professional would want to have.”

Even though Figure of Speech is new to the hunter ring, Dean still piloted the gelding to win four of the five classes. The duo also topped the under saddle and received a high score of 87 in an over fences class.

“He really has such good form and lets you be smooth,” explained Dean. “He’s got a huge stride and an incredible front end so it doesn’t really matter where you spot him, he’s going to give you a good effort every time.”

Dean’s goals for the rest of the circuit with Figure of Speech are to remain consistent and continue on their successful track. “The plan is that we progress each week. Hopefully we keep these kind of results, but as long as we keep getting better and better each week,” Dean commented.

Saturday will feature more competition with the highlight event of the week, the $137,000 Wellington Regional Medical Center Grand Prix CSI3*, taking place in the International Arena. Hunter and equitation classes will also continue, with the Bruno DelGrange Palm Beach Adult Medal in the South Ring.