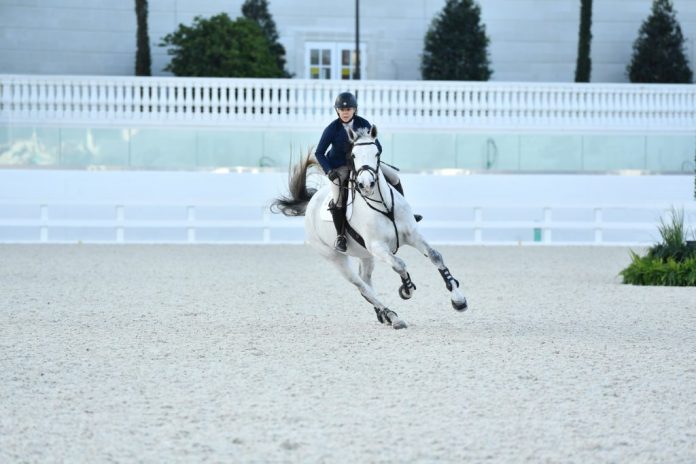 The course for the class was designed by Bobby Murphy of Lexington, Kentucky and featured three double combinations, a liverpool, a triple bar and a skinny vertical, challenging riders throughout the winding course. One of the first entries to contest the course was Tracy Fenney and MTM Farm’s MTM Reve Du Paradis (Crown Z x Kaline de Semilly). The duo earned several ribbons last year in grands prix in Florida, Illinois and Texas and were on their game for the $20,000 Welcome Prix 1.45m. Fenney and the 15-year-old Selle Francais gelding were quick and clear in the first round in a time of 79.553 seconds, well within the time allowed of 85 seconds, and continued straight to the jump-off. With just one available inside turn, Fenney knew that they would have to be fast for a chance at the win. The pair galloped between fences, leaving all rails up in a speedy 34.546 seconds, moving into the top spot.

Fenney and MTM Reve Du Paradis held the top spot until New Zealand’s Sharn Wordley and Lauren Balcomb’s Verdini D’Houtveld Z (Verdi x Laska III) took to the course. The pair was fresh off of a win in the $10,000 Open Prix at the Ocala Holiday Festival in December, preparing them well for this afternoon’s class. Wordley and the 9-year-old Dutch Warmblood gelding also laid down a fast, clear first round in 80.583 seconds before continuing to the jump-off. With a tough time to beat already on the board, Wordley took on the short course at full speed, jumping clear in a time of 34.377, sliding into the lead by just two-hundredths of a second.

About midway through the class, Fenney returned aboard MTM Farm’s MTM Apple (Favorit Ask x Kong’s Whopsie). The pair took top honors in December in the $25,000 HITS Grand Prix at the Ocala Holiday Festival and also earned 2nd in the Ocala Holiday Classic $25,000 SmartPak Grand Prix and the $25,000 HITS Grand Prix, signaling that they would be strong competitors this afternoon. Fenney and the 9-year-old Danish Warmblood mare were slightly more conservative in the first round, making sure to leave all rails up in 82.000 seconds. Determined to win, the duo ramped up their pace for the jump-off, flying between each fence and stopping the clock at an incredible 33.830 seconds, claiming first place, moving Wordley and Verdini D’Houtveld Z to 2nd place and herself and MTM Reve Du Paradis to 3rd place.