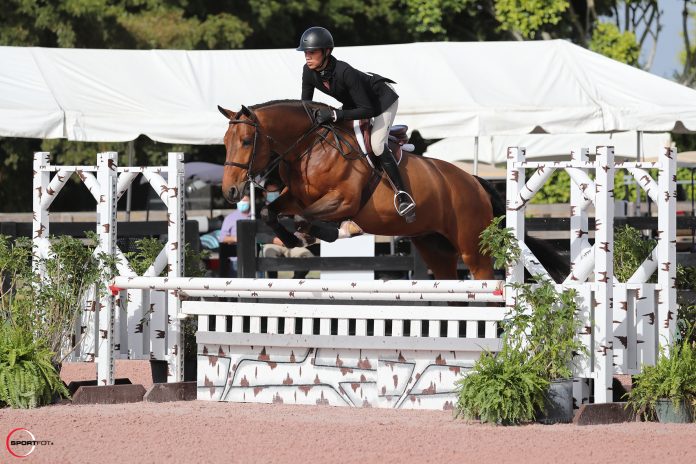 Nineteen equitation riders entered the South Ring on Saturday to compete for the top prize in the Bruno Delgrange Palm Beach Adult Medal. After a first round course and a flat phase, Alexander Goet, of Delmar, NY, rode his own Calvanos to the blue ribbon.

This year marks Goet’s first year as an amateur and it will also be his third year partnered with Calvanos. The pair had successfully shown in the junior equitation classes, including the finals last fall under the tutelage of Stepping Stone Farm.

“We imported him November 2018 from Germany as a five-year-old,” Goet commented of the eight-year-old Westphalian gelding. “From the second he got off the trailer from Europe he has never disappointed us. He is always there to win. Having a horse that wants to walk into the ring and win is a great quality.”

The medal consisted of a first round course, which was followed by a flat test for the top 12 riders. Goet was the sixth rider to go and impressed the judges with his style in both phases of competition.

“The first round was good, and he felt amazing,” Goet explained. “It was nice to have a little bit more horse so I could easily get up the bending line, shape him, and then step down in the turns. He is also very fun to flat; he is so comfortable and like riding a cloud at the canter.”

Goet will be staying and competing in Wellington for the whole season, where he plans to start transitioning from equitation to more hunters and jumpers. “Hopefully we will do some [hunter] derbies this year. Last year we did some over at [Equestrian Village] and a few here,” Goet described. “That’s another good part about Calvanos. He is not just set as an equitation horse; he is a lot of fun in the derbies too.”

The second-place honor went to Lauren Reid, of Kiawah Island, SC, and her horse Norway. Wellington, FL, resident Page Tredennick and her own Tomcat earned a third-place finish in the medal.

Sunday will feature one more day of competition for the first week of WEF, with the $30,000 Pilates Rocks Grand Prix in the International Arena and the crowning of the Large Junior Hunter 15 and Under champion taking place in the Rost Arena.

Farrington Flies to Victory with Kaprice in $25,000 Palm Beach Equine...