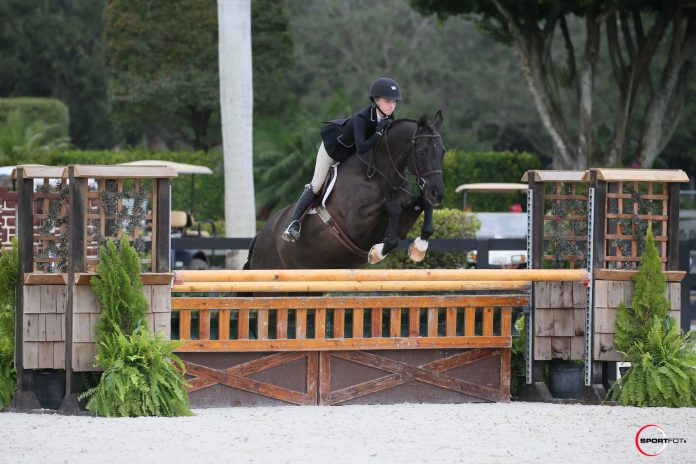 Competition in the Rost Arena began on Sunday, January 17 at the Palm Beach International Equestrian Center with the Large Junior Hunter 3’6” 15 and Under division. Tessa Downey aboard Symbolic earned the tricolor ribbon with first, second, and third-place ribbons during Week 1 of the 2021 Winter Equestrian Festival.

Downey, of Houston, TX, recently began leasing Symbolic from owner Bella Kay. The new partnership, trained by PJP Farm, has only shown together twice, but they are already proving to be a pair to watch out for.

“He is actually owned by one of my mother’s closest friends and was with Beacon Hill Show Stables before,” commented Downey of the 13-year-old Hanoverian gelding by Carenzo. “I love his color. He is always so shiny, and he has such a great personality too!”

The duo caught the judge’s eye and remained at the top during both days of the competitive division. Downey rode Symbolic to a blue ribbon over fences on Saturday with a score of 87.

“I started with a pretty forward pace yesterday. He was so good and scored double 87s,” explained Downey. “He got an 85 today; he was so good in the second round. In the first round I was just a little slow, but he was still great.”

Downey is looking forward to the rest of the season with Symbolic and hopes to stay consistent in the Large Junior Hunter division. The rider also has qualifying for the $50,000 USHJA/WCHR Peter Wetherill Palm Beach Hunter Spectacular during WEF 6 on her mind.

Kat Fuqua, of Atlanta, GA, and her own Grand Remo received reserve champion honors in the division. Fuqua rode Grand Remo to two firsts and an eighth place finish.

Competition will begin again on Wednesday, January 20, and continue through Sunday, January 24, for the second week of the Winter Equestrian Festival.