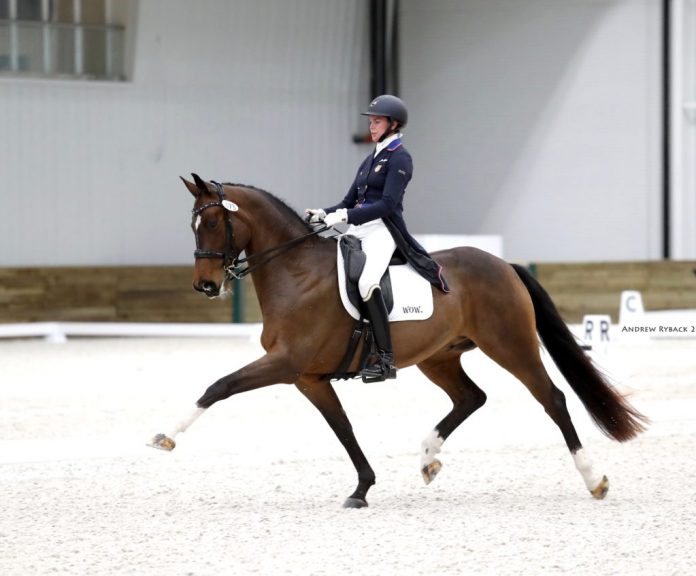 On the opening day of competition, Anna Marek of Dunnellon, FL, and Cynthia Davila’s Duvel captured the top spot in the FEI Prix St. Georges class with a score of 72.500%. Coming back on Saturday, the pair increased their score to 73.971%.

Marek has only ridden Duvel, a 13-year-old KWPN gelding by Florencio, for four months and this was their first show together.

“It was quite exciting. He’s a super fun horse to ride with a lot of movement and tall enough to make me look like a normal sized person,” laughed Marek, who stands at six feet tall. “It was fun to ride a big horse around the show. He is so nicely trained and does that level so well. Duvel makes it feel easy.”

Marek returned to the ring on Saturday for a high score of 76.324% to win the FEI Intermediate-I class with her own Holiday. This was only the second time that Holiday has shown at the I-1 level, but Marek has ridden the nine-year-old Dutch Warmblood gelding by Bojengel since it was four years old.

“The Friday test was a little bit rushed,” she recalled. “My trainer Anne [Gribbons] and I had a whole different plan for Saturday, and we wanted to see if he could handle the test a couple days in a row. Saturday was awesome.”

Marek has lived in the Ocala for 10 years and was very excited to see World Equestrian Center – Ocala built “in her backyard.”

“WEC is so gorgeous and like nowhere I’ve ever competed,” said Marek. “Whatever dressage they’re planning, we are planning to be there. I’m really excited to have the facility so close to home.”

Marek was happy to see that the facility, arenas, and the barns were very horse friendly. “Even the younger ones did well and were relaxed,” she said. “The footing was great. The rings were very nice and quiet.

“I think it’s very exciting for the growth of the sport,” she continued. “It will bring so much to Ocala and even horse sports because the place is friendly for spectators and has more activities outside of equestrian sports. There are wonderful restaurants. I think it will attract a lot of people to become interested in equestrian sports.”

Marek will return to World Equestrian Center — Ocala on January 22-24 with a new group of horses.

Audrie Anthony and Things Rafelli captured a score of 80% in the Dressage Seat Equitaton on Friday.

In the FEI Para Dressage Freestyle Test of Choice class on Saturday, Charlotte Merle-Smith and her own Guata posted a score of 74.800%. Cayla van der Walt and Daturo II were close behind with a score of 74.575%.

In Friday’s USEF Test of Choice, Lisanne Dorion and Hercules posted a score of 72.931% to win.

With a score of 72.759%, Allison Gerit and Chagall won the USEF Training Level Test 2 on Saturday.

In Sunday’s USEF Fourth Level Test 1, Tracey Corey and Sky’s The Limit completed their test to a score of 70.769%.

Jaron Verheij and his own Dutch D-Day won the open division of the FEI Grand Prix class on Friday with a score of 69.022%.

It was a tie for the top spot in the FEI Intermediate II class on Saturday, with Kerrigan Gluch and Hampton Green Farm’s Mejorano HGF and Ivo Juhrend and Eye Catcher, owned by Karen Young, both scoring 67.353%. Gluch and Mejorano HGF took the win in the I-2 on Friday in the open division with a score of 68.971%.