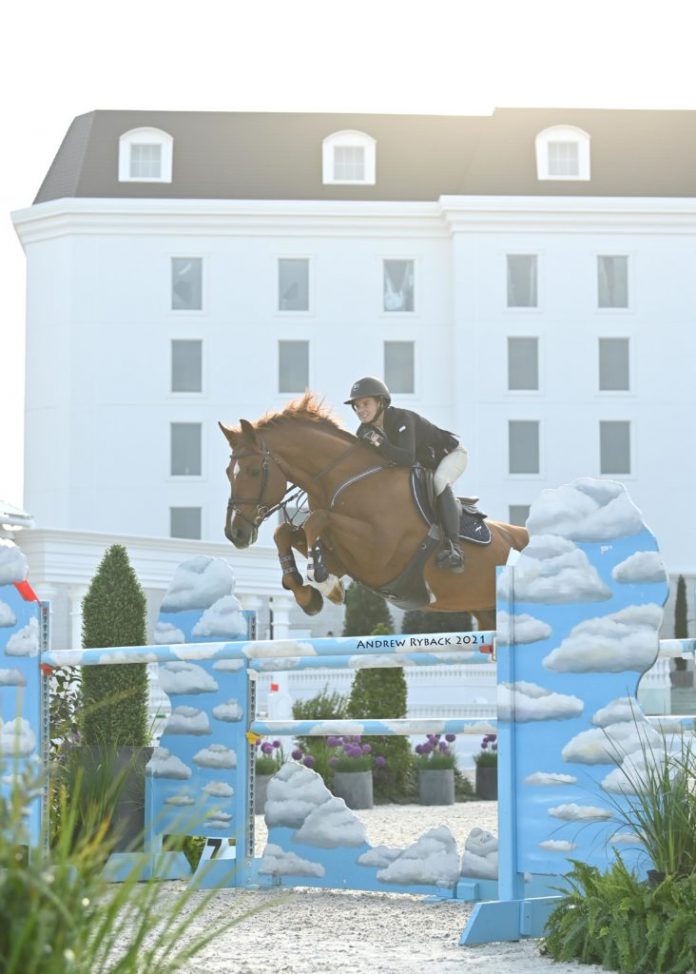 Feature class action for Week 3 of the World Equestrian Center — Ocala Winter Spectacular 2021 kicked off Thursday afternoon with the $20,000 Welcome Prix 1.45m in the WEC Grand Arena. Five countries were represented in the field of 24 highly competitive entries, but it was amateur Jordan Petersen of High Springs, Florida, and Derek Petersen’s Diamant’s Legacy (Diamant de Semilly x Courtney Love II) who managed the only double clear round of the class for the win.

The course for the class was designed by Anderson Lima of Brazil and featured 15 jumping efforts including a triple combination, a double combination and a skinny liverpool oxer. The technical track called for an adjustable ride and tested riders with options for both forward and collected related distances. The skinny liverpool oxer at fence 11 cost several riders 4 faults, as well as the quiet 9ab combination. However, the track suited perfectly the duo of Jordan Petersen and Derek Petersen’s Diamant’s Legacy (Diamant de Semilly x Courtney Love II). The pair have had a strong start to the World Equestrian Center — Ocala Winter Spectacular 2021, taking 2nd place in the $20,000 Welcome Prix 1.45m during Week 1 and 4th place in the $75,000 WEC Grand Prix 1.50m last week. Petersen and the 12-year-old Oldenburg stallion were on form again this afternoon, navigating one of only two clear first rounds in the class in 74.492 seconds. They continued straight to the jump-off, crossing the timers with a second clear round in just 38.876 seconds for the win.

The only other entry to manage a clear first round was Trapp O’Neil and AG Arion, LLC’s Baltazar D Z (Balougran Z Thalia De Quidam). The pair collected many top placings in 1.30-1.40m classes throughout 2020, signaling that they would be strong competitors in this afternoon’s class. O’Neil and the 12-year-old Zangerscheide gelding were the first entry to jump a fault-free first round, leaving all rails up in a time of 73.357 seconds. The duo continued straight to the jump-off, taking just one rail for a four fault score in a time of 42.877, ultimately finishing in 2nd place.

Brooke Kemper and Caroline Blum’s Arpeggi (Arpeggio x Lucy Lancer) also fell victim to the 77 second time allowed. The pair left all rails up in the first round, but their time of 77.754 seconds earned one time fault, landing them in 3rd place.

Petersen took a moment to chat ringside about her win, “I knew the course was pretty technical since I went near the end of the order and only one had jumped a clean first round before me. My plan was to just try to make it to the jump-off, then I knew I had to leave all of the jumps up. He jumped super well, he seems to really like it here. We love the facility, we’re lucky to have such an amazing facility just an hour from home.”

Petersen also commented on Diamant’s Legacy’s personality, “He is 12 years old this year. He is a stallion, but does not act like it. He has a puppy dog personality. He’s super honest and tries his hardest every time. He has a bunch of babies that are currently looking really great!”

When asked about herself and her farm, Petersen responded, “I am an amateur rider from the Ocala/Gainesville area. My husband Jared, my father-in-law Derek and I run Legacy Farm, so it’s truly a family business. We do a lot of young horses. Diamant’s Legacy is the only Grand Prix horse in the barn right now, so I’m really blessed that I get to have the ride on him.”