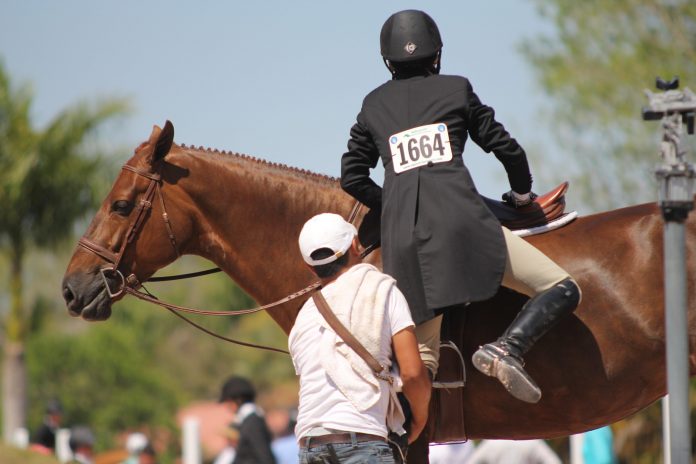 I was recently reading an article about the hidden lives of Ballerinas during the artist Degas’ life. These ballerinas were portrayed in his very famous paintings. The article spoke about how the dancers were treated as commodities for the wealthy, and that lecherous men often took advantage of these young women because they were desperate. Not just desperate to be the best in their art, but to simply survive.

They lived in a time when they made little money and the cost of living was greater than their allowances. When the only way to survive was to sell themselves as either ‘entertainers’ or live in a way that was so unpleasant, it was almost unbearable.

As I was reading this, I had a sudden realization. It struck me so hard and so fast, that I became incredibly sad all of the sudden.

I’m a professional in this sport, and have been since I was about 23. I come from a horse background, my mother is also a professional, and have a small business on the east coast. I’ve ridden with two different olympians as a professional and continue to do so. My program has had as many as 20 horses in training that I rode myself, or as few as two. Some of these horses have been very nice, and some… not as nice. But what does all of this have to do with Degas’ dancers?

When I was about 30, I had a tough, headstrong mare that someone had brought me to try to sell. She was touchy, jumped like a helicopter, and could be quite strong. She’d already gone through two trainers before she came to me. Even though she had a lot of not so amazing qualities, I quite liked her. She had a lot of jump and I thought, If I can just get her to settle down, I could have a really nice Grand Prix horse.

I started working really hard on this horse. Enlisted help from a hunter professional friend, and started gaining headway. My next goal was to try to buy the horse from the owner. The owner wanted quite a bit of money based on talent alone…which was difficult. They weren’t paying full training and I cut them a deal on my services, so I thought I’d be able to negotiate a bit.

I started scouting people that maybe could invest, but hit a lot of roadblocks. I don’t come from a wealthy family, I didn’t have a prolific showing career at the higher levels because of that. At that time, I was training off and on with a trainer, due to finances, so I wasn’t on their radar for much of anything.

A friend found a person that she had known in the past that she said may be interested in helping—a wealthy married man from South Africa that owned some vineyards in the states. I was excited for the prospect of even having one person be able to help. I told my husband, who was excited for me. I told my mother, and she was cautiously optimistic.  This should have been a sign.

Then I met this potential investor. He was a far older gentleman than my 30 years. He met me and we had a lunch meeting. I then showed him the horse, sent videos of her showing, rode her for him etc. Things looked like they were falling into place, but they quickly fell apart in the most insidious way. I got an email that shook me up. An email where it seemed, (to me, my husband, and my parents), that he was propositioning me. He told me that we would be on the road together a lot, and he would be around me all the time, and though his wife knew and understood how things were…how would my husband feel?

I found this disturbing in a lot of ways. First, (in an effort to be tactful), I told him my husband trusted me because I’d been horse showing my entire life. That I loved my husband, and he loved me enough to trust me. This did not seem to satisfy the man’s questions. They continued to the point where I could no longer deny what was being asked.

He did not buy the horse, nor did I work with that gentleman. Years down the road, the horse eventually went to another trainer.

I’ve been in this business for a long time, and I’ve heard a lot of things about a lot of people. No, I’m not going to do anyone the disservice of naming anyone. That doesn’t do anyone any good at all. However, if even a fraction of these rumors are true…we have a lot of men and women willing to do pretty much anything, uncomfortable or not, to get where they want to go.

I can only speak from my own personal experiences. However, having that happen and then hearing what you hear… it seems uncomfortably close to what happened to those dancers.

How can we fix this for those young professionals without a lot of backing? How can we change the culture of thought if these rumors aren’t true? No one wants to hear that so and so got where they are because they sleep with their sponsors or with the person that sells them horses. If true, it just shows the desperation of people who feel they have no other options.

How can we give people other options? How can we make things more affordable so that’s not something they considered? People make their own choices in their lives for sure. If their choice is to do something out of their own enjoyment, that’s one thing. If their choice is, this is what I have to do or I won’t get that horse, that’s a completely different story.

My choice was to say absolutely “No,” but I have a husband with a job and other customers who’ve been with me a long time. That’s not everyone’s reality.

Some of Degas’ favorite subjects to paint were ballerina dancers and horseback riders. Are they really all that different, even today?

Ann DeMichele is a professional Hunter/Jumper trainer and rider out of Haymarket, Va.  She trains young horses and shows up to the Grand Prix level.  She is an advocate for hard working men and women in our sport.