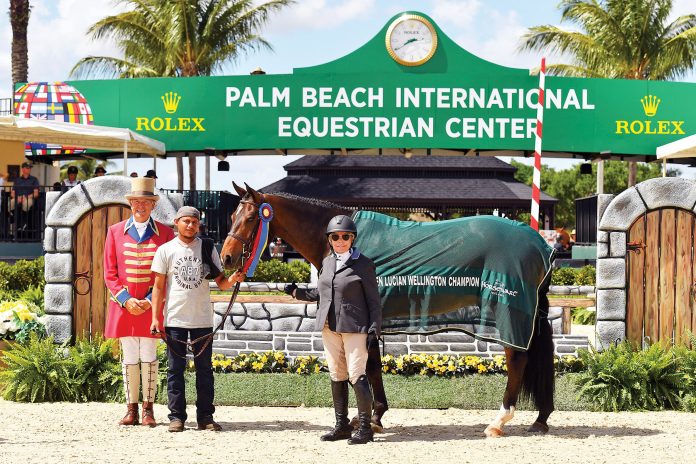 Karen Lucian is not only a prominent show competitor on the Wellington, Florida show circuit, but she also possesses admirable characteristics, which make her successful in both her professional and riding careers. Lucian’s determination is as strong as a pro football linebacker. She works long hours, balancing her careers in both investments and competing.

Certainly, prestigious equestrians like Lucian compete in Wellington; however, uniquely she owns homes on both coasts, which is a lifelong dream for her. Lucian has never shied away from hard work to accomplish her goals. Owning homes in both Newport Beach, California and Wellington, Florida allow her to follow her childhood dream of competing on the East Coast with her company based in California.

Horses were not handed on a silver platter to Lucian. Jetting coast to coast while working, and riding has taken years of dedication for her. Lucian’s perseverance is to be recognized and admired.

Karen Lucian graduated from the University of California at Santa Barbara and embarked on an entrepreneurial career based on creating value for her clients. She founded a real estate company that focuses on matching her clients’ needs with real properties, resulting in consistently high levels of million-dollar transactions.

As a result of her keen interest in the financial services industry, Lucian decided to focus on bringing the same high level of service and the pursuit of creating value for her clients by beginning a career as a financial advisor. She quickly became recognized for her efforts and had her weekly television program on investment planning.

Over the past 20 years, Lucian is proud of the recognition she received for her experience and knowledge in financial planning. She earned the designation of Certified Financial Manager from Merrill Lynch Financial Planning College and was profiled in Registered Rep., a national publication for investment representatives.

“There are so many reasons not to ride or compete, but I love [it]. I feel like I can contribute to making shows more inclusive for others like myself.” —Karen lucian

In November 1999, Lucian joined Prudential Securities and, in 2008, transitioned to Raymond James as a First Vice President, investments. In 2012, Lucian passed the curriculum and examination necessary to be designated Investment Management Consultant. In 2018, she was awarded the designation of Accredited Investment Fiduciary, AIF®, by the Center for Fiduciary Studies.

Lucian’s hard work and determination in achieving professional accomplishments match her determination on the Wellington show circuit. Her goal of competing on the East Coast was fueled as a junior rider in California when her parents wouldn’t send her back East to compete as many of her barn friends did.

This setback motivated her tremendously, and throughout adulthood, she worked hard and set a goal to compete back East one day. Now, each time Lucian steps foot on an airplane, her sense of self-accomplishment is something she is proud of.

Lucian’s trainer, Keri Kampsen, would agree that Karen puts forth her best efforts consistently. Kampsen is highly respected by Lucian and views her as an idol. She shows Kampsen her dedication to the sport by riding as often as possible, giving her best during practice, and always presenting herself as professional as possible.

“When I go to the ring, whether schooling or showing, each ride, I try learning the most I can from Keri. She is amazing and talented, and I am fortunate to ride with her. I always want to ride my best and ride well not only for myself but for Keri because I want her to be proud of me,” Lucian said.

“Riding is a sport that others can view riders as less than because of their weight, age, or because of their riding level. There are so many reasons not to ride or compete, but I love riding and competing. I feel like I can contribute to making shows more inclusive for others like myself,” Lucian said.

Lucian also shows her dedication to Kampsen by flying to Florida from California year-round and weekly during show season. Constant flying might seem unappealing to others, but Lucian loves it. Her childhood dream of competing on the East Coast and having clients in Florida, also, is now her reality.

“It is hard work, but I am so grateful for everything. It is a long 13 weeks flying back and forth from Florida to California during show season. I take a red-eye on Wednesday night after work, and I am planning for practices the next few days with Kampsen. In between practices, I am working, and then after showing on Sunday I fly back to California. I love being able to show back East and have clients on both coasts because it has been a childhood dream of mine,” Lucian said.

Lucian explains that show venues in Wellington are well organized, which helps older riders stay safe. She appreciates tremendously how the management goes above and beyond to create an atmosphere where older riders like her can be safe and confident while competing.

“The South ring in Wellington is full of older riders like me. The managers do an excellent job making it safe, -which lets riders in my division have a great time and not feel pressured by younger riders. I love it,” Lucian says.

Wellington’s management creates a relaxing atmosphere by monitoring who is riding with the older riders. Not allowing jumpers into the south arena or letting little kids blaze around on ponies helps reduce the chances of a mishap in an inherently dangerous activity, and Lucian is grateful for their contribution.

“Back in the day, I rode at Flintridge Riding Club, and they used to call any rider over 30 years old a fossil over fences. Back then, thirty was considered an old rider. The sport has evolved so much over the years. You used to show in the 3 foot 6 inches to start or stay home, and we showed Thoroughbreds, too, which were much different from the Warmbloods now. However, now riding is more inclusive for everyone, all levels and capabilities, and I think that is wonderful,” Lucian said.

Lucian shares stories of injuries sustained while riding, and despite her mishaps, her love for riding never dwindled.

“After a serious riding injury, you think about it often and hope it does not happen again. It is life-changing.” Lucian said.

Lucian rides at multiple farms including the J.F. Shea Therapeutic Riding Center, in San Juan Capistrano, California. Lucian rides with an instructor, Janelle, and together Lucian has worked hard building confidence in her riding.

“Janelle taught me horses can emotionally feel everything we transfer to them. I am riding on a horse’s spine, she once said. If someone was riding on my spine, I could feel them, too.

Being blessed with clients on both coasts, competing on the East Coast, and having great health is a gift. Lucian’s hard work and perseverance paid off even if it took years to accomplish.

Lucian has been the Wellington Equestrian Festival Circuit Champion and High Point Champion of the South Florida Hunter Jumper Association in her division for three years riding three different horses.

“That was hard work, of course. Getting up early East Coast time for practice, but in reality, I am still on West Coast time, and exhausted; however, I am determined to give my all.”

Lucian’s love for competing has skyrocketed with her horse, Clear Advantage. The pair may not soar over Grand Prix fences, but Lucian is proud of their accomplishments.

Lucian’s horse Clear Advantage, his barn name is, Frenchie, fitting as he was imported from France. Frenchie’s fan base has grown since his video debut on Tik Tok this past Christmas.

“I couldn’t fly back East, and Keri made a video of Frenchie wrapped up as a Christmas present. Keri mentioned Frenchie was so well behaved the entire time wrapping him from head to toe in wrapping paper. Frenchie has over 280,000 likes from the video!,” Lucian said.

“I love Frenchie, and I appreciate him so much. I am fortunate to be living the life I have dreamed of as a child.”

Karen has really enjoyed working hard to achieve her goals. If you are interested in setting some goals or developing a financial plan, feel free to give her a call at 949-734-2239 or visit her website for more information at – raymondjames.com/karenlucian. Raymond James & Associates, 660 Newport Center Dr., Suite 570 Newport Beach, CA 92660.
Raymond James & Associates, Inc., member NYSE/SIPC

*This story was originally published in the February 2021 issue of The Plaid Horse. Click here to read it now, or subscribe for issues delivered straight to your door!

From A-List to “A” Rated: Celebrities You Might Find at a...