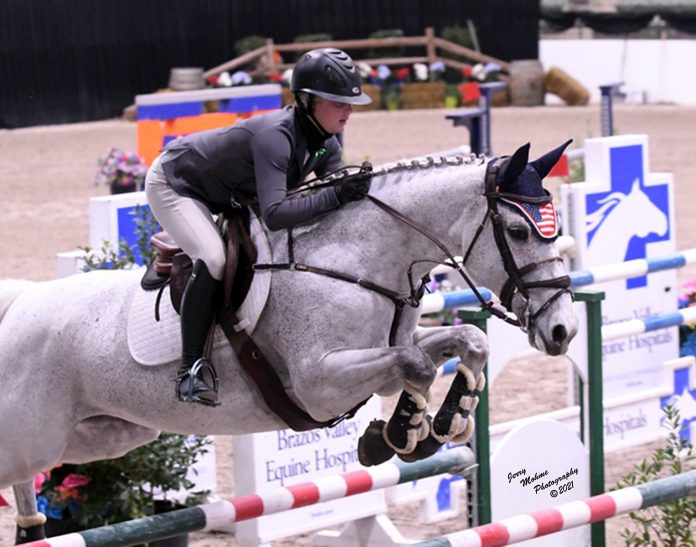 The three riders each have their sights set on Saturday night’s $100,000 Lone Star State Grand Prix, the culminating grand prix of the four-week Texas Winter Series, and Wednesday’s wins served as welcomed warm-ups for the week at the Great Southwest Equestrian Center in Katy, Texas.

For Ikast, victory came aboard Castino in the 1.40m Jumpers, where he also finished second riding Crespo VDL and third with Classini.

“Castino is my best horse,” said Ikast of the 10-year-old bay Silla Argentina stallion who has thus far finished third and second in the 2021 Texas Winter Series grand prix classes. “He’s lovely to ride. He loves to jump, and he wants to be careful. He still hasn’t knocked a rail down in his three weeks here, so I’m excited about Saturday night. He’s still a little bit green and just missing a little bit more experience in the big classes. He will get that hopefully on Saturday night.”

This year’s Texas Winter Series marks Ikast’s first visit to the Great Southwest Equestrian Center in roughly 15 years, as the Danish rider has spent the past several years in California, where he continues to be based.

“We heard that Valerie Garza was running a fantastic horse show here, so we drove all the way from California to be here this year,” said Ikast. “There are three things that we’re looking for as a rider: good footing, good prize money and good service. The service here is second to none. The prizes are good; the footing is good, and the hospitality is just unbelievable. They’re really nice people here. So we’re really enjoying the show here.”

For the winner of Wednesday’s 1.35m Jumper class, this year also marked the first time back at the Great Southwest Equestrian Center, but with far less of a gap between visits for McIntosh.

Originally hailing from Texas, McIntosh grew up competing at the Great Southwest Equestrian Center, but she missed the past few years after her mother’s training and showing business, Booth Show Jumpers, moved to Lexington, Ky., in 2018.

“We’ve been basing out of Kentucky, but this winter, we decided to come back home and see what’s going on here, and it’s been really great so far!” said McIntosh. “It’s like home for these horses, too.”

McIntosh’s Wednesday win came aboard both Inne van de Plataan and So Live Helau, as the two horses finished tied as the only two to traverse the first-round course of the 1.35m Jumper class without fault, with McIntosh electing not to return to jump off on either ride.

While both horses shared the win, McIntosh said they don’t share much when it comes to similarities in personality.

“They’re way different from each other!” said McIntosh. “[Inne van de Plataan] is 16.1 [hands], and she’s a little cold but pulls you to the jump. So Live Helau is 17.2 hands and lanky and really quick but super sensitive. They’re two completely different rides.

“This was their warm-up class for Saturday’s grand prix,” continued McIntosh. “So they’ll get to chill out now until then.”

In the 1.30m Jumpers, it was Colleen Acosta who earned the win aboard Lancome, a 10-year-old Belgian Warmblood owned by L.O.O. LLC.

“I would say that she’s the most powerful, kindest horse I’ve ever ridden,” said Acosta of Lancome, who topped a field of 11 entries for the victory. “I thought she was really good today. We love it here. We’ve been coming here for years, and they keep doing such a great job.

“We got stuck here last week with the freeze, and they did a great job helping us,” continued Acosta, referencing the largely unprecedented freezing temperatures throughout Texas the week of February 14. “We were probably better off here than at home!”