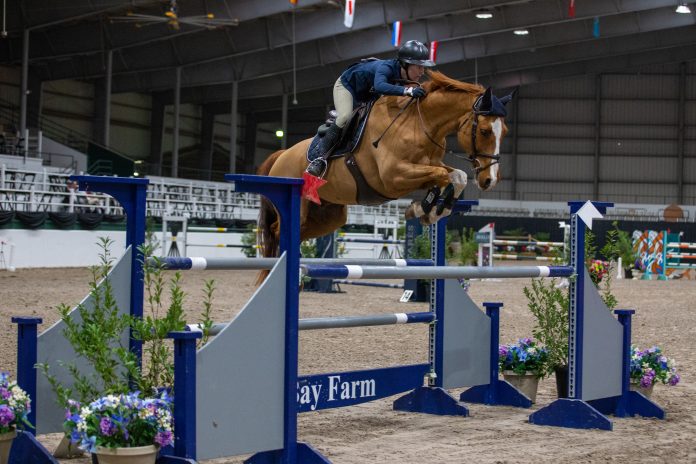 Katy, Texas – February 25, 2021 – Competition is heating up at the Great Southwest Texas Winter Series, which hosted the $20,000 Welcome Stake, sponsored by American National Insurance, on Thursday, February 25. Genevieve Munson, who rode two horses in the 21-entry class, snagged the win aboard Zonderling with the fastest clear round in an eight-horse jump-off.

Munson hopes her performance in Thursday’s event will be a precursor for Saturday’s $100,000 Lone Star State Grand Prix. She and Zonderling jumped a clear first round, then returned in the jump-off to ride to a 35.003, beating the second-place finisher, Frankie Owens on Malibu, by 1.607 seconds.

“In general for 1.35m, for these horses, it’s rather simple height-wise,” Munson said. “[In the first round,] I wanted to really make sure to stay on my game technically and not get too laid-back or relaxed, to just be very aware and not take anything for granted.

“In the jump-off, I expected it to be rather quick because the field was a lot of nice horses and a smaller track. I just wanted to be accurate without pulling out all the stops because I wanted to save those for a little bit later this week,” Munson added.

Munson and Zonderling collected $6,000 for their win. Munson has been riding the 17-year-old Dutch Warmblood, who is owned by Mark Holden, for about three years. She said the gelding tends to be excitable on the ground and in the ring, but it’s just because he loves his job.

“His show name is Zonderling, which actually means ‘weirdo’ in Dutch,” Munson said with a laugh. “It’s very accurate. When you get on him, he wants to go to work. He doesn’t really sit still or do the ‘hunter chill,’ but when he’s in his stall, he’s laid-back. He’s just a joy to be around.”

The junior rider also piloted Contendro Star, a 13-year-old Hanoverian gelding, in the $20,000 Welcome Stake. The pair placed ninth with one rail down, which Munson blamed on getting too ahead of herself.

“I kind of dropped the ball on that one, but he jumped well; he’s ready for this weekend,” Munson said.

Munson, who is from Arkansas, appreciated having the Texas Winter Series in Katy. Living outside the hunter/jumper meccas, she said it’s sometimes hard to get to the bigger venues, and when she does, it’s difficult to find classes with as much prize money as the Winter Series offers at the 1.35m height.

“Having something in Houston that is not only accessible, but in a height range with an amount of people that gives me a place to learn, it’s huge,” Munson said. “The management here is amazing to begin with, as well, so anytime we can come down and see Val [Garza, Operations Manager], we try to.”

With Munson taking the win and second place going to Owens and Malibu, owned by DS Holdings LLC, third place went to Daisy Ford and her own Gatsby.

In addition to his second-place finish in the jumper ring, Owens also saw success in the hunter ring on Thursday. He rode Casira to the win in the $2,500 Texas Green Hunter 3’/3’3” Super Stake. Owens and the 11-year-old Danish Warmblood mare, who is owned by DS Holdings LLC, also won the $1,000 USHJA Green Hunter Incentive Stake.

Fieldstone Farm and the Therapeutic Power of Horses