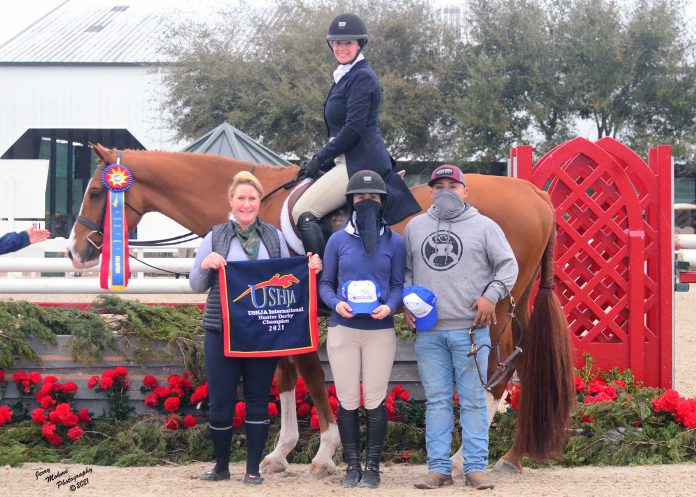 Wise earned the top honor aboard Sausalito, owned by Kirby McCool, and she secured second place riding her own Co-Pilot. To earn the win, Wise had to best the field over a two-phase course set by designer Skip Bailey. Riders first completed an eight-fence Classic Hunter Round before immediately picking up the pace and beginning a five-fence Handy Hunter Round.

Wise then returned to the ring to nearly match her own score with Co-Pilot. The pair earned a score of 167 in the classic round, and scores of 81 and 91 in the handy round accumulated to give them a 339 overall total score.

“Sausalito was great!” said Wise, who has ridden the 12-year-old Dutch Warmblood gelding for the past three years. “Everything that I asked him to do today, he was spot on. It was like he had already looked at the course. It was just so pleasant and easy.

“He’s so lovely and always the same,” continued Wise. “He comes out and he wants to do his job. He’s probably one of the best horses that I’ve ridden. I just adore him. He’s always so focused, and he just listens so well. I feel like I never have to touch the reins on him. He just floats everywhere.”

“Co-Pilot is my baby,” said Wise, who purchased the bay gelding two years ago. “He went in and really jumped his heart out and was so lovely. I couldn’t have asked for him to be any better; he stepped in and just stepped up to the plate. He was awesome. I’m so excited for his future.

“We love being here [at the Great Southwest Equestrian Center],” concluded Wise. “We’re so lucky to have a place like this in our backyard. It’s awesome.”

Coming the closet to catching Wise in Friday’s class was Jordan Gilchrist, who rode to third place and a score of 332 aboard Carige, owned by Monarch International.

“He definitely knows how to rise to the occasion. He’s quite successful in these national derbies,” said Cyphert of the 13-year-old Hanoverian gelding. “The first trip today was a little funny because after the first jump, I was hearing something, and I realized that he was losing a shoe on the way to the second jump.

“Fortunately for me, it came off a couple of strides before it, but it was definitely a little bit of a distraction. I think he held it together really well for being with only three shoes,” continued Cyphert, who returned for the second round with all four shoes back on his veteran mount. “He does the high options easily. We can always sort of plan on that, and he really excels in the handies. You can do all of the turns, all of the high options and really show off just because he has a lot of good miles.”

Finishing in second place behind Cyphert and Crimson Tide were Natalee Haggan and Captain Jack, owned by Steve Weder.

Week IV of the Texas Winter Series continues on Saturday, February 27, with the $100,000 Lone Star State Grand Prix beginning at 5:30 p.m. (CST). Tune in to watch the grand prix, and all of the main jumper ring action, live on Horse & Country TV here!

Para Equestrian on the Paralympic Program for Los Angeles 2028